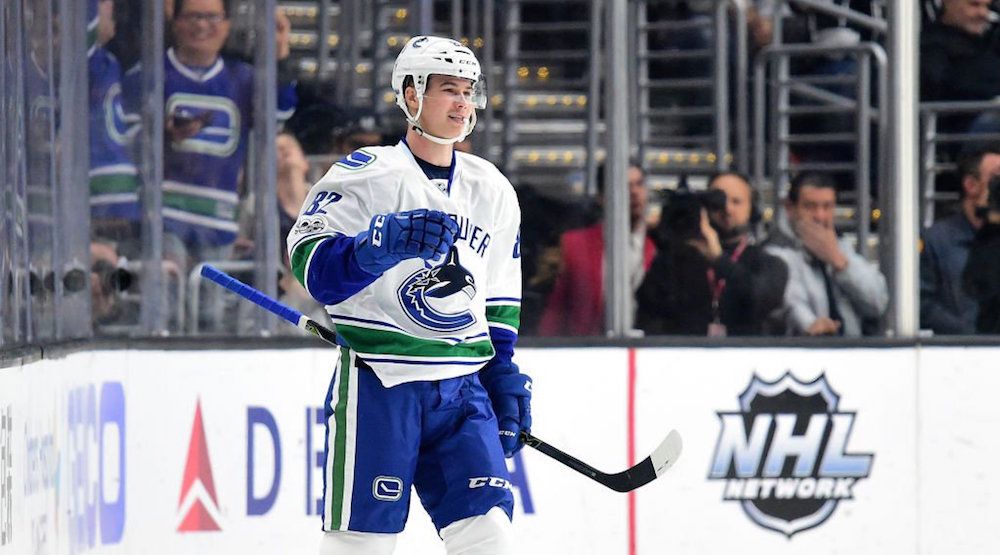 This is a big training camp for Nikolay Goldobin.

The 21-year-old Russian winger is entering his first full season with the Vancouver Canucks, after being acquired in a trade for Jannik Hansen back in March.

He played in 12 games with the Canucks last season – scoring three goals – but wasn’t a favourite of Willie Desjardins. He scored in his debut with the team, but was also benched, playing just 5:51.

That was an indication of what was to come, as Desjardins didn’t appear to be enthralled with his play defensively.

“A lot of people talk about my defensive zone (play), but I think my last two years I got really good at that,” Goldobin said after practice on Wednesday. “Of course there are things to get better at, but I don’t think it’s my weakness.”

The youngster was saying the right things, but this is clearly a good chance for him to impress a new set of eyes. Even if he doesn’t make the opening night roster, leaving a good impression with the coaching staff is important to help earn a quick recall from the AHL. That goes for a lot of Canucks players this year, as competition for roster spots under new head coach Travis Green promises to be as high as ever.

While it’s early, Green rewarded the offensively gifted former first round pick with a plum assignment. Goldobin was riding shotgun with Henrik and Daniel Sedin during line rushes.

Yes, it’s early. It’s the first day of training camp and we’re likely to see a lot of combinations.

“You could put anyone with anyone,” Henrik Sedin said, downplaying first day practice line combos. “We shouldn’t read too much into these lines.”

But of course it’s not entirely “anyone with anyone.” Henrik was playing with Daniel. That’s no accident.

The Canucks have their first preseason game coming up Saturday in Los Angeles. After the game, a yet-to-be-determined split squad will travel to China for a pair of exhibition games.

Decisions need to be made sooner than usual, so yes, against Henrik’s advice, I’m reading into these lines.

With the number of veterans forwards signed by GM Jim Benning this offseason, players like Goldobin appear destined for Utica. A chance with the twins – even at 36 years old – is an indication that he’s going to get a chance to prove himself.

“Of course I enjoy playing with them,” Goldobin admitted, though not willing to read into things as much as the guy asking the question.

“Play hard and be open,” he said, of what to do if he’s put on their line in a game situation. “They’re great passers, they will find me for sure. I just need to finish.”

Goldobin needs to show “finish.” It’s what he’s here to do, to score goals.

“Play hard with the speed, win the puck battles, all the little details,” he said of what management asked of him before camp.

If he does that and he’s given some good linemates, he could surprise everyone and win a spot out of camp.

“Obviously I think I’ve played enough in the AHL,” said the determined youngster, who has 118 AHL games under his belt. “My goal is to play in the NHL.”

Despite the favourable spot with Henrik and Daniel, Green didn’t look like a coach ready to gift him a spot at practice. The rookie head coach has a no-nonsense approach, and Goldobin felt the wrath of that to some degree on Wednesday.

He was called out a few times by the new Canucks coach, who yelled out “Goldy!” loud enough for the onlooking fans and media to hear.

Goldobin’s been given an opportunity, not a gift.

Play hard, be smart, score goals, and a spot in the opening night lineup in Vancouver could be his.