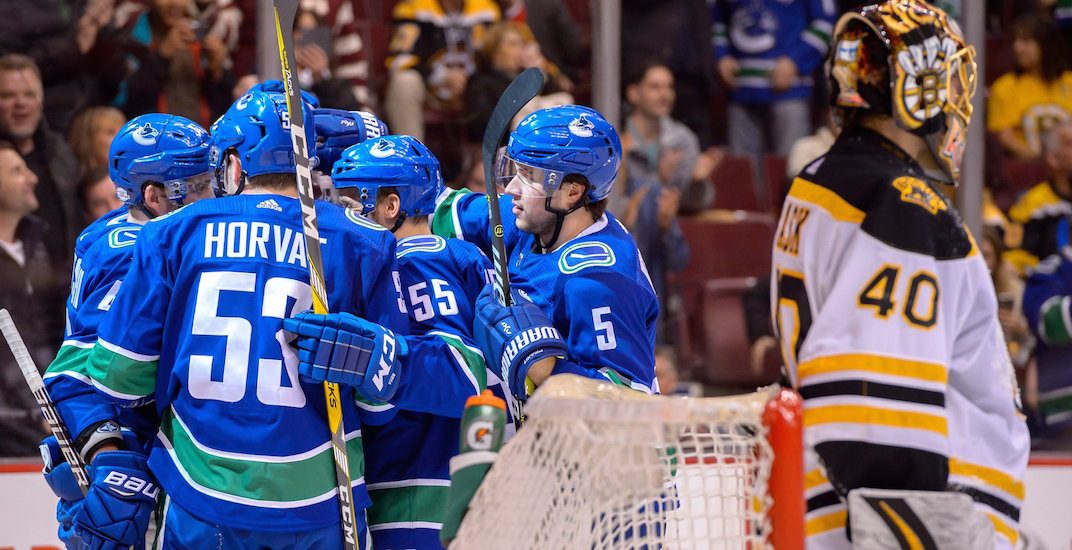 I know a lot of the players on either side are different from 2011, but a home game against the Bruins still gets me amped up.

But despite what the final score would eventually indicate, it wasn’t a dominant victory. The Canucks got their teeth kicked in at even strength tonight.

Even if you were to adjust for score effects, it doesn’t paint a pretty picture for the Canucks. They were if anything tonight opportunistic.

#Canucks pulling out their best counter attack soccer game plan tonight. Getting caved in at 5v5 in possession.

Anders Nilsson was not actually supposed to be the starter tonight. Jacob Markstrom was going to get the start but was feeling under the weather. Enter Nilsson.

He made 44 saves, and so many of them were of the spectacular variety it made people question if a doppelgänger was wearing his pads.

Who the heck is wearing Anders Nilsson's equipment tonight? #Canucks

The question now becomes “does he get the start Tuesday against Colorado?”

My vote is yes. Ride the hot hand and if he has a bad game, you can always go back to Markstrom.

Erik Gudbranson is not one of the most popular players on the Vancouver Canucks. But if there’s one way to endear yourself to Canucks fans, it’s delivering a huge body check on a player that is still despised around these parts.

Forget all of the intangibles and grit that Canucks management are apparently enamoured with. If there’s one thing that Gudbranson should get a new contract for, let it be this.

3. The story of Sven Baertschi’s scratch

Sven Baertschi was a healthy scratch in the Canucks last game against the San Jose Sharks. He was likely scratched because of a costly turnover in the game against the Florida Panthers. It wasn’t about the points — he had four points in four games previous.

Did the scratch motivate him tonight? Probably.

He scored the goal to make it 4-0 in the first period and had the second highest even strength ice time amongs forwards. It certainly appears that he’s also back in Travis Green’s good books.

A counterpoint to the whole Baertschi scratch debate was the idea of scratching Loui Eriksson. If Travis Green is willing to sit Baertschi, why not extend the same standard to an older player that hasn’t been producing?

If you're going to send a message about bringing it every night, why scratch Baertschi who has 4 points in his last 4 games? Why not scratch the 6 million dollar man who seems invisible on most nights #Canucks

While I understand the reasoning behind it (and agree with it), I don’t think Eriksson is getting scratched anytime soon. Green really likes his veteran players, plus he had a great game tonight.

Loui stuck it to his former team by scoring two goals, and almost had a hat trick after a miscue behind the net from Anton Khudobin.

In the first intermission, Jim Benning gave an interview to the Hockey Night in Canada panel on his vision for the Vancouver Canucks.

Omar wrote a great piece on what the Canucks should be trying to do (which you should read by the way). In it, he basically lambasts Canucks management for not having a clear vision on how to build a contending team.

So it was with great hope that I thought Jim Benning was going to clear the air in regards to his plan for the franchise. But besides talking about maybe re-signing the Sedins and looking for a “big player – maybe a forward with some physicality that has the skill to make plays” (P.S Jim — 30 other NHL teams want one as well) it was really the same old, same old.

Jim Benning talks like Kevin from The Office when Kevin decides to remove certain words from his sentences in order to save time.

You know what I didn’t hear him talk about? Trading players for picks and prospects — what a supposed rebuilding team should be doing

It’s nine days until the trade deadline. If management decides to stand pat like they did at the 2016 deadline, there will be an anger in this city that will be hard to recover from for Benning and company. You can bank on that.

6. Jake decides to tease us

Virtanen takes the puck to the net (!!!)….. and Dowd pots the rebound#Canucks pic.twitter.com/iVo12r6YyS

You can see from this why the Canucks decided to take him sixth overall back in 2014. He has a rare combination of size and speed.

But unfortunately for Virtanen and Canucks fans, he’s done stuff like this far too inconsistently to be an effective player in the NHL. He’s only 21 — his future in hockey is far from decided — but he’s running out of time to figure out how exactly to do this on a regular basis.

The Canucks celebrated Chinese New Year on Saturday with a number of fun initiatives.

They wore red jerseys in warm-up, with gold year of the dog patches. Erik Gudbranson even broke out his red jacket that he bought on the China trip in preseason.

But the best part of all? It had to be Marie Hui singing the anthems in a traditional red dress as gold dragons looked on.

Never in a million years did I think I’d be wearing a cheong sam on the ice at @rogersarena, singing the anthems for the @canucks with two gold dancing lions flanking me. Amazing. 🙌🏼