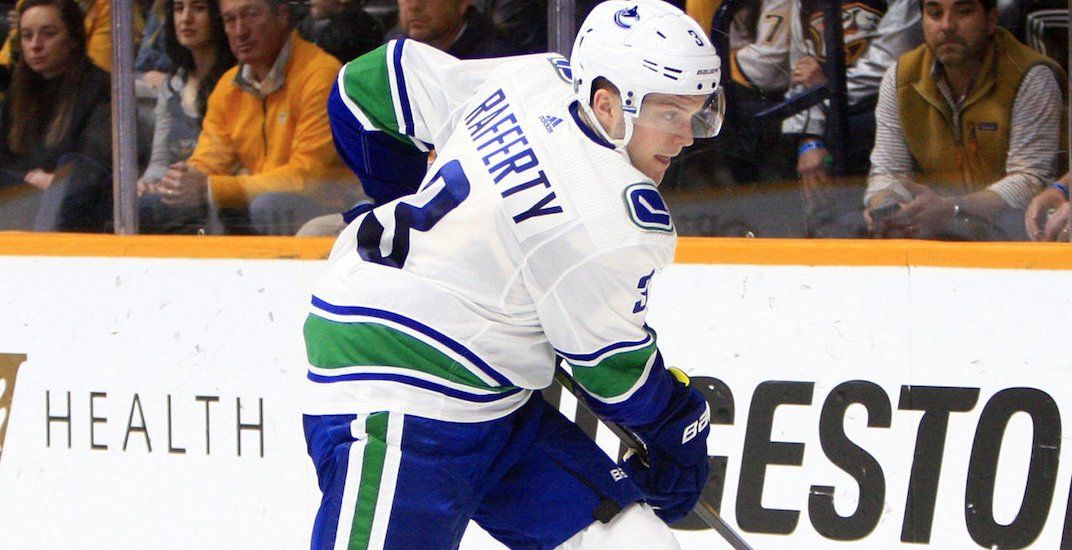 Every time preseason rolls around, you wonder which unheralded player will step up and steal the spotlight.

While no prospect other than Quinn Hughes has blown the doors off in Vancouver, one guy who garnered attention during the first week of preseason was 24-year-old defenceman Brogan Rafferty.

“He’s got real good poise,” Travis Green told reporters at training camp in Victoria. “Confident with the puck, not afraid to make a play. I thought he’s defended well and he’s a bigger body, he’s got a good shot – a lot of qualities that you like in a defenceman.”

After being signed by the Canucks on April 1 following the end of his college hockey career with Quinnipiac University, Rafferty slipped into the Canucks’ final two regular season games. He didn’t register a point, but the right-shot defenceman displayed some wheels and vision when passing the puck.

Those skills have also been evident in the preseason, but with a lack of pro experience, Rafferty found himself among those sent to Utica on Saturday.

Although he has some kinks to work out in his game, there’s some reason to believe the rookie could follow a similar trajectory to Troy Stecher.

Rafferty’s rocky road to the NHL

To say that Rafferty’s road to the NHL has been rocky would be an understatement.

In 2012, while still in high school, another teenager from the midwestern United States named Brogan Rafferty was charged with first-degree murder. An Ohio news station even used a picture of the hockey player instead of the convicted murderer.

Then, there were the physical deterrents.

At age six, Rafferty was diagnosed with amblyopia in his right eye. He is legally blind in that eye, although there’s a silver lining to his lack of 20/20 vision.

“I never knew what it was like to have really good vision,” Rafferty told the New Haven Register in 2016. “I don’t know if it’s helped my game; if it’s made me think more on the ice instead of taking more for granted.”

Rafferty also had adolescent scoliosis, a curvature of the spine that needed correcting. 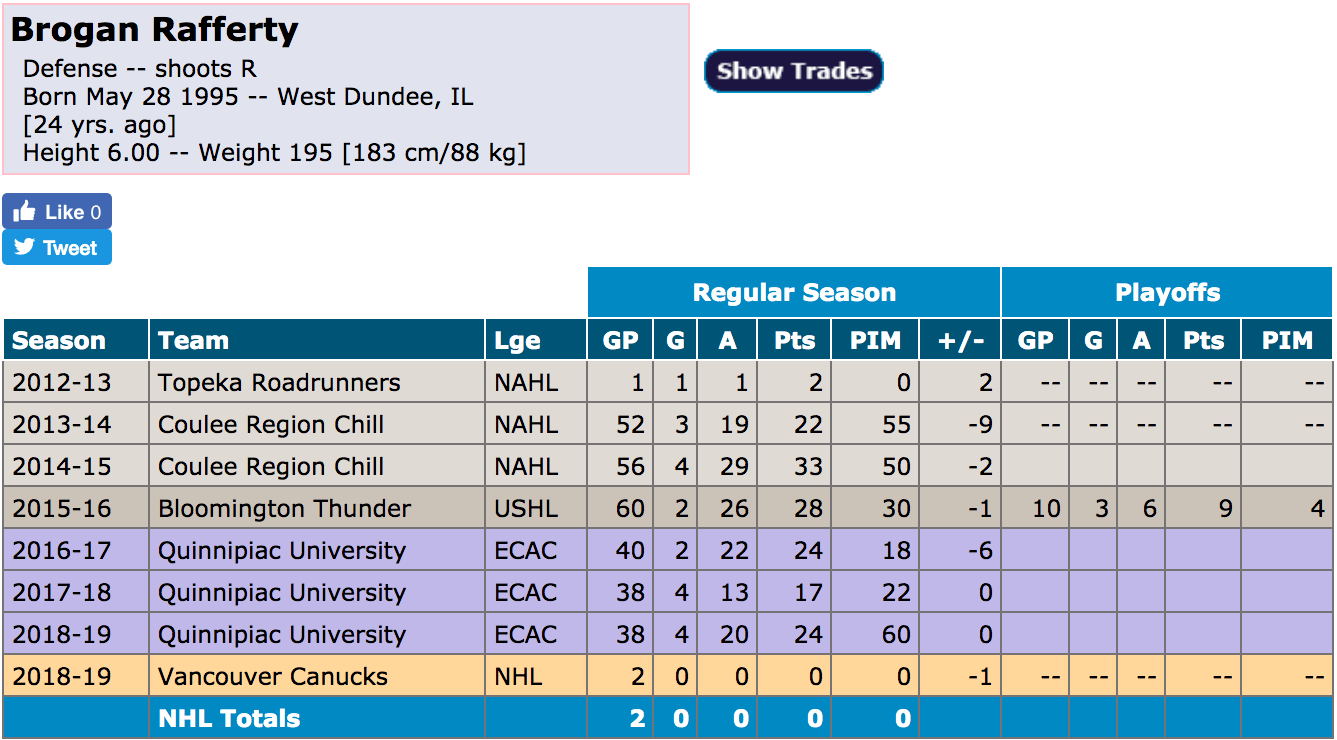 During his draft-eligible season, Rafferty hovered around 5-foot-8 and 130 pounds. He was playing forward and without being on an NHL team’s draft radar, he made the switch to defence.

That change, along with a growth spurt, helped Rafferty excel as a smooth-skating defenceman for Quinnipiac. It also helps that he’s now listed at 6-foot-0 and 195 pounds.

How Rafferty could crack the Canucks’ blueline

If the preseason is any precursor, there’s a good chance that Rafferty could spend some time in the NHL, even though he’ll be starting the season in Utica.

He’s arguably been one of the team’s most impressive players. Rafferty has speed to burn, which allows him to stay in position in his own end. The West Dundee, Illinois native was even able to chip in a goal during preseason play, ripping a slapper past Edmonton Oilers goalie Mikko Koskinen.

That @brogan_rafferty blast is too 🔥 to handle!#Canucks and Oilers tied 1-1, mid-1st. Shots are 7-2 Edmonton. pic.twitter.com/uBefGm2cRV

Despite the praise, there are elements of his game that need work. Rafferty is a bit of a risk-taker with the puck, aiming to make the flashy play over the safe one on many occasions. He’s only been credited with one giveaway in the preseason, but there have been a couple of other risky plays that make you believe that some seasoning in the minors isn’t a bad thing.

It’s one reason why he’s beginning the season in the AHL, but his story raises reminders of another undrafted college free agent who made a strong impression in the preseason.

Just three years ago, Stecher stood out during training camp, but soon found himself in the AHL. While he impressed during preseason that year, he was stuck behind six guys slated to begin the year.

However, when Chris Tanev went down with injury, Stecher was called up and thrown right into the fire. He took Tanev’s spot on the top pairing and played over 22 minutes in his debut.

The Canucks blue line certainly looks better now, which doesn’t help Rafferty. What does help is the fact that he’s turned heads during the preseason.

Although Rafferty is a little more flashy and less reliable defensively than Stecher, is it unreasonable to think that a similar scenario might occur if there’s an injury? On the right side, it’s Alex Biega, then arguably Rafferty, in line for some NHL time. Jalen Chatfield is the other notable prospect defenceman that shoots right for the Canucks.

It’s worth noting that Rafferty is two years older than Stecher was during his first NHL season, so there might be less room for player growth. However, the late riser has turned heads this preseason, and it’s easy to envision him carving out a role if he continues to impress down in the AHL.