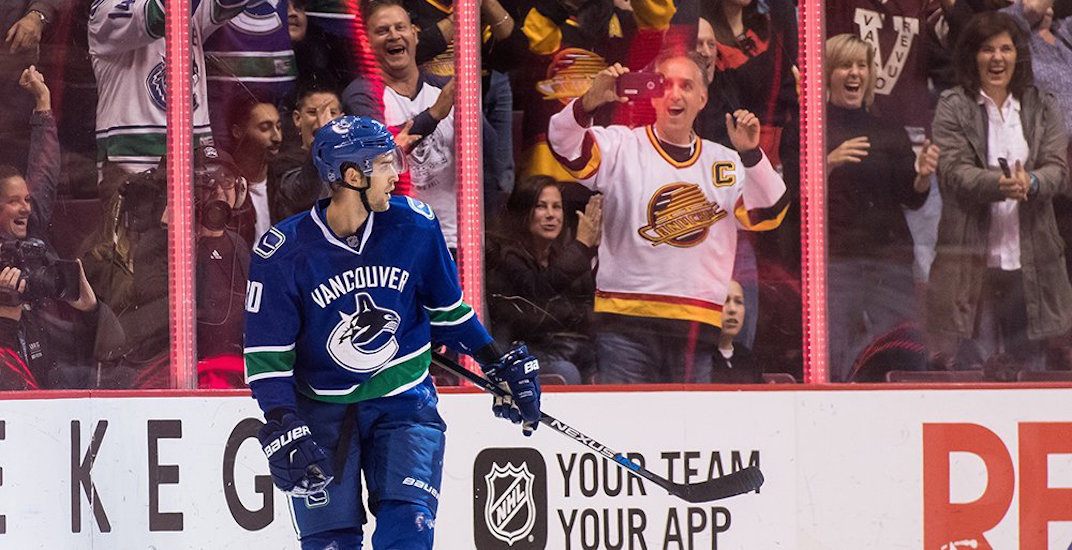 Canucks GM Jim Benning has had a busy offseason in free agency. He’s added veterans, and lots of them.

Thomas Vanek is the latest, and it has caused quite a stir with the fanbase.

Where will Brock Boeser play? Is there room for the kids to crack the roster? Is the team straying from its rebuild admission?

These are all pertinent questions.

Some players will be given the chance to win or lose a job based on their play in preseason, although you have to wonder if that will be different this year given the team is going to China. Some players will board a charter to Shanghai after their first preseason game in Los Angeles. The remainder of the team will stay behind to play games in North America.

Will the team use the trip as a bonding experience for veteran players? How will that affect youngsters making the team with their coach on another continent?

If say, Jake Virtanen stays behind to play with the likes Michael Chaput and Jayson Megna, surely that hurts his chances of making the team.

It seems that the team is content to have most of their young players start with the Utica Comets anyway, and that’s not necessarily a bad strategy. But Boeser, a young player with a bright future who played well in limited NHL action late last season, could be ready. He could be a Rookie of the Year candidate. Surely if he proves that he’s NHL-ready, a spot will be opened for him.

The question is, who will he play with?

Conventional wisdom has Henrik Sedin, Bo Horvat, and Brandon Sutter lining up as the team’s top three centres, with the versatile Sam Gagner filling in on the wing or perhaps centring the fourth line.

If Boeser plays in a top-nine role, that would bump Gagner to the fourth line. If Boeser goes to Utica, one of Gagner or Sutter will need to move from centre to the wing.

Perhaps Sutter and Gagner ought to switch roles.

New coach Travis Green should experiment with Sutter on the wing. The 28-year-old is no stranger to the position, seeing some time on the Sedins’ wing at times under Willie Desjardins.

Fact is, the position plays to his strengths.

Sutter has been a divisive figure upon his arrival from Pittsburgh. The 6-foot-3 centre was advertised as a shutdown centre, with the ability to produce offence.

The reality is, he’s done neither very well.

Despite ample opportunity, including boatloads of power play time with the Sedins on the first unit power play, he managed just 34 points (17-17-34) in 81 games last season. That was good fifth-highest on a low scoring team, and quite simply, wasn’t good enough.

At his age, the time for counting on potential is long gone. He is what he is, and he’s been given many chances to prove himself.

Sutter’s career year came seven years ago. The most points he’s scored since then was last season, which again, wasn’t good enough.

So why not play into his strengths?

With more goals than assists in his 596-game career, Sutter is not a playmaker. He’s not the pivot that will mesh with Brock Boeser or Thomas Vanek – two shooters pencilled into the Canucks’ lineup. He was second-last among Canucks forwards in Corsi-For percentage last year, which suggests he’s not a defensive dynamo either.

What he has is good size and speed, to go with a heavy shot. So why not play him on the wing?

Sam Gagner, meanwhile, is everything that Sutter isn’t. He’s got skill and playmaking ability.

While he’s not a perfect hockey player by any means, if you take away his disastrous one-year stint in Philadelphia, he’s been a consistent point producer in his career. He can get skilled players like Boeser and Vanek the puck.

A one-two-three punch of Henrik, Horvat, and Gagner isn’t going to win a Stanley Cup, but it might not be half bad.

Given the composition of the Canucks’ roster – barring injuries – Sutter makes more sense on the team’s fourth line as a centre, or on the wing in a top-nine capacity.

Truth be told, these forward lines probably give the Canucks the best chance to win hockey games next season:

Sutter was good in the faceoff circle last year, winning 54.3% of his draws. While not ideal, he can still take draws as a winger, and certainly he’ll still be relied upon for his faceoff-winning ability on the penalty kill.

But with a new coach, it’s time to remove the illusion that Sutter is the second coming of Ryan Kesler. The way this team has been put together, he’s a fourth line centre or a top-nine winger.