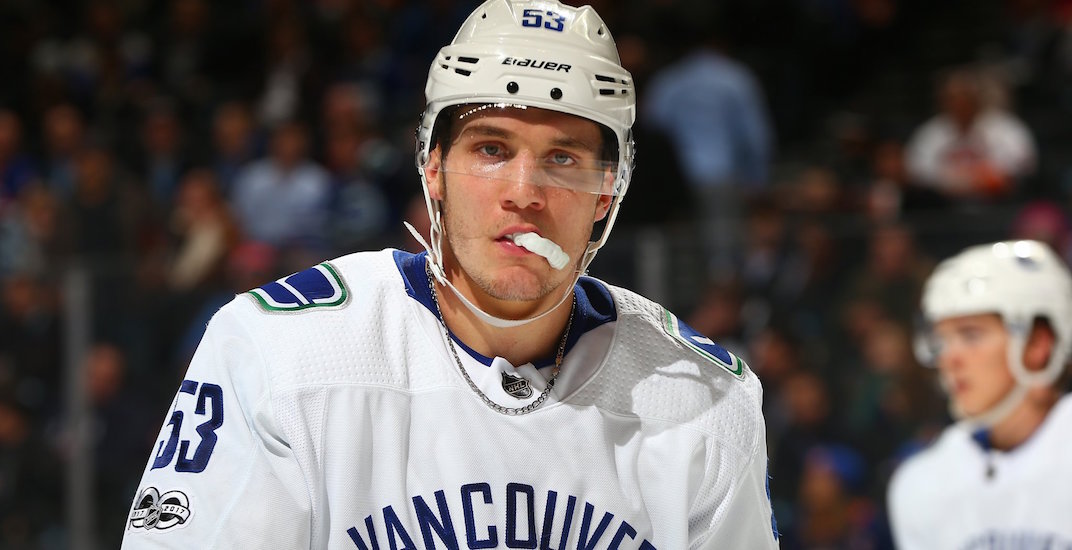 It may be time to panic, Canucks fans.

Bo Horvat, the team’s No. 1 centre, left Tuesday’s game with an injury.

He had an MRI on Wednesday and the news isn’t good. Horvat will be out for multiple weeks with a fractured foot (TSN’s Bob McKenzie has reported that it is a fractured ankle).

.@BoHorvat suffered a foot fracture and will be out of the line-up for multiple weeks, up to six. A firmer timeline will be available after he is seen by a specialist. pic.twitter.com/kYeh0xT8IJ

Whether the fracture be in his foot or ankle, this is obviously a big blow to the Canucks, who are currently riding a three-game winning streak into Thursday night’s home game against the Philadelphia Flyers.

Horvat’s last shift was at the 8:50 mark of the third period. Prior to then, he appeared to catch a rut in the ice as he approached the boards, which may be where he was hurt. When he was named the game’s third star, he limped out of the dressing room without his equipment on to give his stick to a fan.

This is the first significant injury of Horvat’s young NHL tenure.

The 22-year-old centre has taken the next step in his career with the Canucks this season. He’s been their go-to guy in all situations, particularly recently with Brandon Sutter out of the lineup. Sutter is expected to be out for at least another week.

The injury to Horvat means that Alexander Burmistrov will get back into the lineup. It also means an increased role for the team’s other three centres in Henrik Sedin, Markus Granlund, and Sam Gagner.

It also means a call up for Michael Chaput. He and Thatcher Demko (no goalie is hurt, he’s coming up for complicated cap reasons) have joined the team in Vancouver.

Demko’s call up is bad timing for his dad, who just flew to Utica to see his boy play.

So I'm on my way to Utica to visit my kid and the phone rings… No seriously… stop me if you've heard this one before…. #shortvisit

Remarkably, this is the second time this has happened to Demko’s father this season. He was with his son in Utica in November when the 21-year-old goalie was called up to Vancouver as insurance while the team waited for birth of Anders Nilsson’s son.