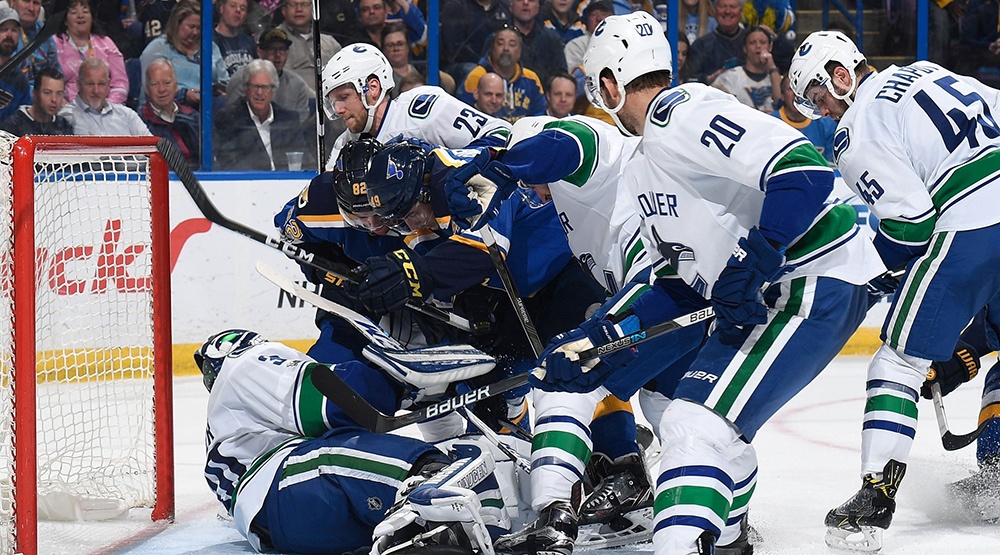 Remember when half the city’s media was dumbfounded by what Canucks fans want?

Hopefully they saw Thursday’s 4-1 loss to the Blues. It should help clear things up.

Hope for the future? Check.

Another loss to stay at the bottom of the standings? Double check.

Tryamkin fought and nearly scored a goal for the ages, Boucher played over 15 minutes, Goldobin returned and actually got to play, and the biggest thing to most – Vancouver lost, remaining only four points ahead of Arizona for 29th in the league.

#Canucks officially eliminated from playoff contention.
STL & NAS both have 85 points
best Nux can do is 85

So much for meaningful games in March. Isn’t that what Benning said he wanted to help Vancouver’s young players develop just a couple of months ago?

Wait, Linden said the plan has never changed last week… so they meant to be bad all along?

Judging from that celebration I guess he’s telling the truth.

Moving on… lucky you – in tonight’s SixPack, we’re giving you what you want.

What’s that you ask?

I know you don’t care about the goals. You want to know what Goldobin did in his return.

To start, he played 12:21. This might not sound amazing, but given the refs handed out 24 minutes in penalties, and Goldy doesn’t play on either the penalty kill or power play (yet, we hope), it was impressive Willie kept rolling him out when he could.

Especially when he made plays like this drop pass to Sbisa in the first.

I didn’t have a problem with the creativity really, but with Willie if you’re not worried a creative player is going to get benched for the slightest thing, you’re not doing it right.

Goldy also showed flashes of that quick shot and ability to find the net that has so many Canucks fans excited for what he might do someday.

I don’t have much more, so let’s just enjoy the fact that the kid we call Goldy, who loves his flashy cars, also sports a gold-plated mouthguard, shall we? 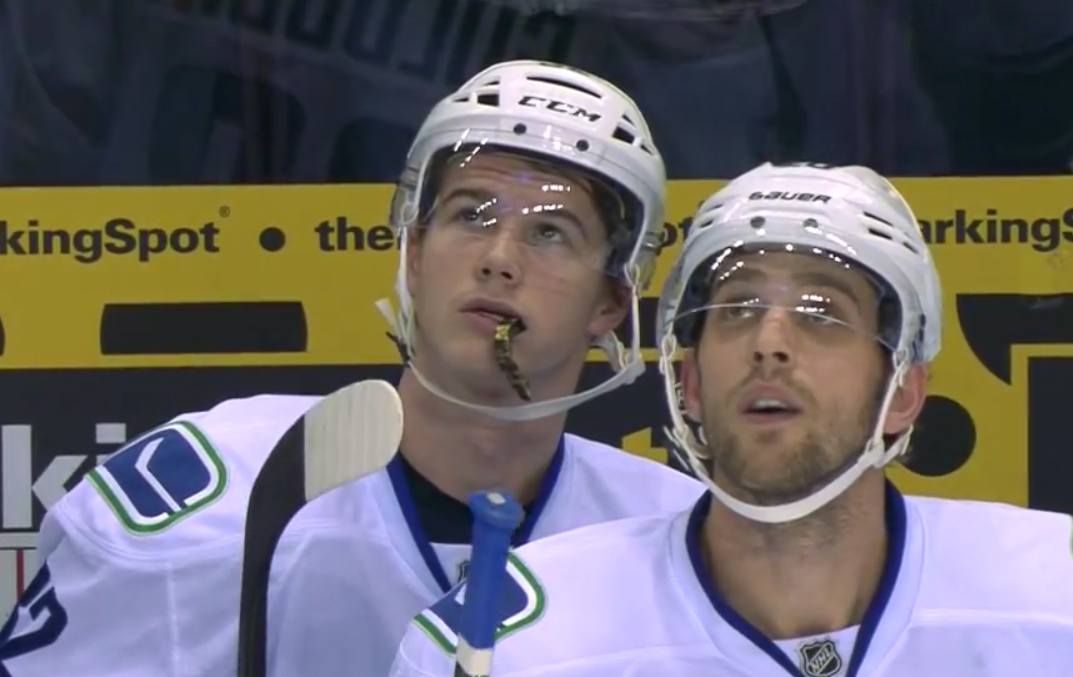 That reaction from another angle.

Sure he put his bottom hand on the stick right at the end, and sure, he hit the post, but it’s the thought that counts, isn’t it?

Tryamkin, the 8-foot tall defenceman from Russia is trying something he saw the best player in the NHL do… that either takes tons of guts or incredible delusion.

No wonder fans love him.

They do, by the way. So much that they’ll make their own shirseys if the team won’t do it for them.

Marcus, if you made one for Wyatt you’ll have your own fan for life.

I don’t know if you want Miller or not, but for the way he’s been playing lately, he deserves the shoutout.

Here was one of his biggest saves.

The opposition didn’t hit 40 shots tonight but they still got 34. Pretty sure they were not mostly from the outside, despite what the GM thinks.

Apparently Willie was pretty upset about the goal that was not called off despite this clearly offside play right before it.

Here’s the goal that came after.

Did it matter? Well, it turned a one-goal lead into two, so no, it really didn’t. But you might hear some quotes from Willie, and the radio guys might deconstruct the play for days, so I’m just trying to be helpful and prepare you.

As angry as I've ever seen Willie #Canucks pic.twitter.com/mrhRZaUrZp

Jim Benning had some interesting answers to some questions on his radio appearance with Jeff Paterson Thursday afternoon.

JPat asked him why the Canucks are giving up such a high number of shots against.

“I think for the most part the shots are from the outside. We’ve been protecting the middle of the ice pretty good …

I think we’ve been limiting for the most part second and third opportunities, but that’s just one of those things with all the injuries we have right now. We have guys playing up in the lineup where they shouldn’t be. We’re just trying to compete on a shift to shift, night to night basis, and hopefully at the end of the night we get some results.”

Is he right? See for yourself. 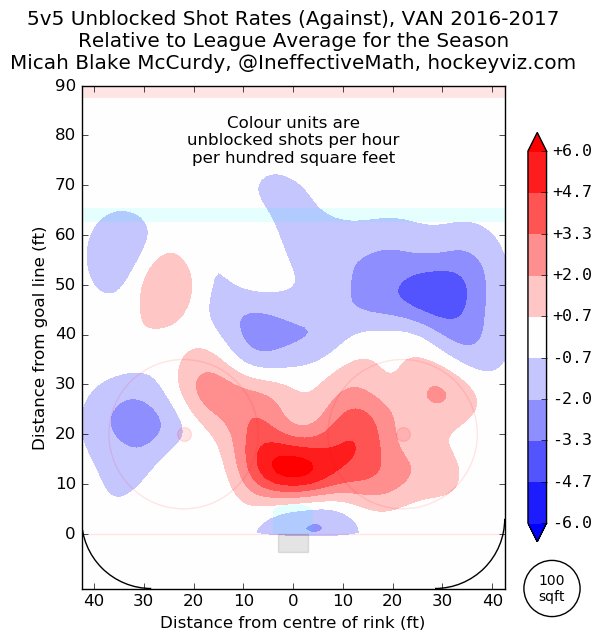 The red splotches show where the highest volume of shots against have come from all season on the Canucks, so no, they’re not limiting shots to the outside.

Now, Benning was speaking more specifically about the recent games, and especially the game against Chicago. Here’s the shot chart from that one. 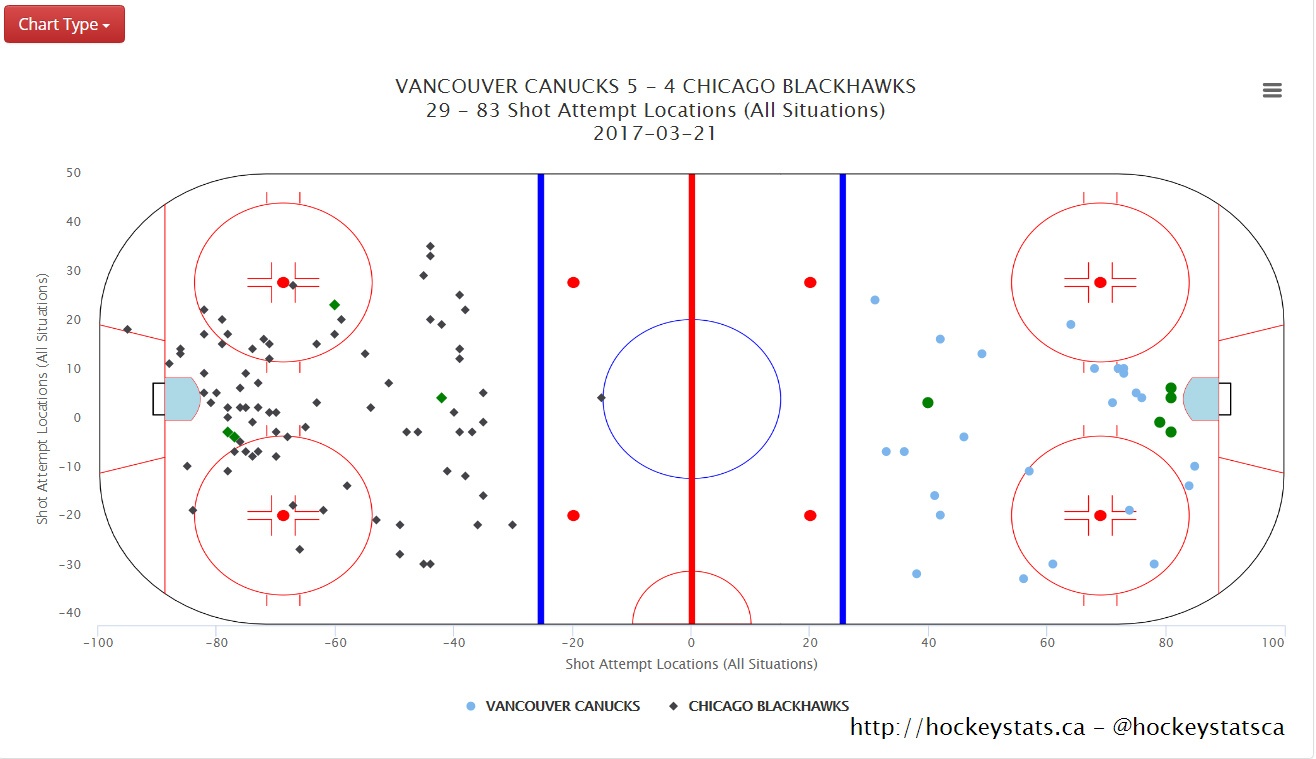 Uhhh, maybe Benning needs to get his eyes checked?

JPat then asked why the team has had such trouble scoring this season.

“That’s a good question. I thought our power play would be better this year than it’s been. If you have a good power play in the NHL now and you can score a goal a game, that really helps over the course of an 82-game schedule.

We’ve been working hard, we’ve been competing. At times maybe we don’t get to the net enough for rebound chances and second and third opportunities.”

He’s right – a power play that scored a goal a game would definitely help.

For context – the last teams that averaged a power play goal/game were Detroit, San Jose, and Washington in 2008-09.

JPat also asked how the team knows what they have in Markstrom given his lack of playing time this year.

It’s just been one of those things with him. He’s got hurt or he’s been sick. When we were going to get him some games and stuff, he just hasn’t been healthy to play. He’s sick this week, and we’re hoping he’s going to be ready for our home stretch next week …

We were hoping he was going to get in more games this year. It didn’t happen. If things don’t work out with Ryan, then he’s our number one goalie and I have confidence in him.

All that was fun, but the most stunning response was Benning had to be his answer to what the final straw was on shutting down Granlund for the season.

“He needed the surgery, but his wrists the last couple weeks started bothering him bad. It got to the point where if he kept playing he could’ve maybe done more damage to it. I talked to Markus and talked to his agent and with them we decided let’s get surgery done so we can start rehab and he’s ready for training camp.”

Wait, if his wrists hadn’t become that bad, he’d still be playing these meaningless games for the Canucks?

6. Do you support tanking?

As simple as that is, it often appears many don’t get it. For example, Ben Kuzma during his radio hit Wednesday:

This whole notion about the tank, this is created by people with too much time on their hands. I can’t imagine going to the Canucks room and saying ‘Hey Henrik, are you going to tank tonight?’

I mean, really. I get the thing, let’s be 28th, let’s be 29th, let’s make sure we have a top-five pick, I get that. But really, really, with a team that’s in a total transition the one thing you’re trying to establish is some sort of culture, some sort of effort, some sort of understanding.

When the Sedins went nuclear a year ago and said to the kids, listen, it’s about getting better every day, even though we’re not making the playoffs we have to establish something here …

Are they trying to tank? No.

Now, I’m not trying to make an example of Kuz here, because he’s certainly not alone. There are a bunch of media members who constantly argue against tanking, about how the players and the team don’t want to lose, and of course about establishing “culture.”

First, he and other media members constantly confuse the idea of fans wanting their team to tank with the players wanting it. No one is saying players actively tank. They might give up on a season or a game, they might check out, but they’re not thinking “I hope we lose so this team is a contender in 5 years.”

Second, I’m constantly baffled at how establishing a “winning culture” could be more important than drafting a more skilled player.

Look at it this way. Which would help the Canucks be a better team down the road: those three wins against the California teams last season or Patrik Laine and three less wins?

People against tanking will instantly argue that finishing lower doesn’t guarantee anything in terms of draft position. It does though. It guarantees a greater chance of moving up in the draft, and it guarantees less chance of falling lower.

So while I’m not going to tell you which way to go – to cheer for Canucks wins or losses in the remaining games, I will tell you if you’re cheering for losses you’re still a fan. More than that, you’ve probably done some reading or hard thinking on what it takes to be successful in the NHL.

Seeing that, I’d almost say he’s fully on board for the tank, but then I remembered this miss he had a couple years ago.

It happens I guess.

Note: Thanks to Ryan Biech for always helping with the gifs in this post