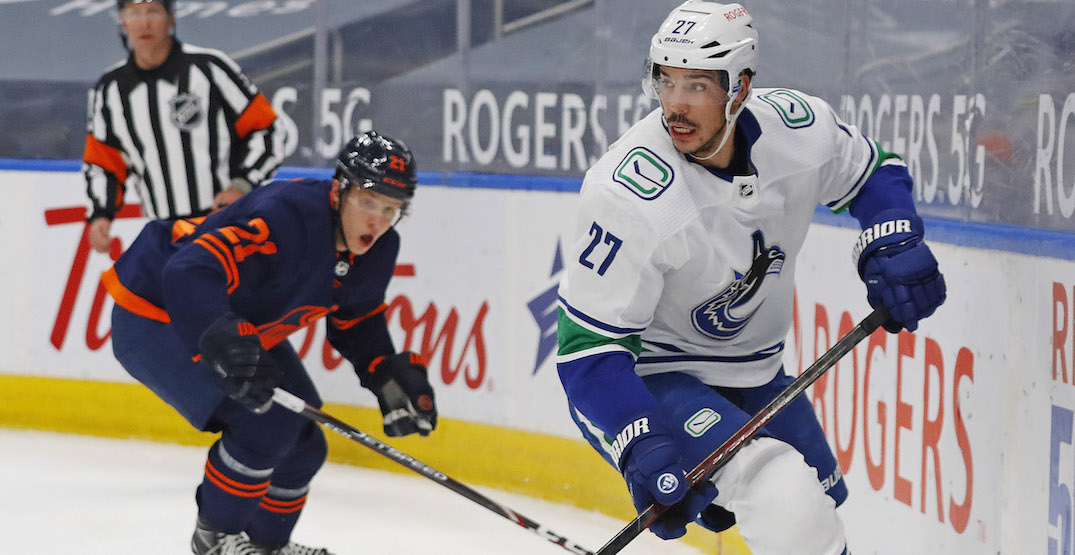 At this stage of his career, Travis Hamonic isn’t a top pairing defenceman anymore. The 31-year-old is probably closer to a No. 4 or No. 5 blueliner on a good team.

And yet, his absence threatens to derail the Vancouver Canucks’ season before it even begins.

We don’t know why Hamonic isn’t at camp yet. On Thursday, Jim Benning said on Sportsnet 650 that Hamonic would be present for the first day of on-ice sessions on Friday.

Benning on Hamonic: "He'll join the team tomorrow. He had a reason to come a day late so he's flying in today and he's got to do a covid test, when we get that negative test back he'll join the group." #Canucks

But Hamonic never showed. The team released a statement on social media Friday morning saying that Hamonic was away for personal reasons, and the team hasn’t denied the persistent rumours that his absence is vaccine related.

Benning has stated that the team will be 100% vaccinated by the first game of the season, and that the organization has a “strict policy” in place. Hamonic is reportedly contemplating opting out of the season, if not retiring entirely, before Friday’s deadline.

If Hamonic opts out — whatever the reason may be — it will leave the Canucks in a really tough spot.

Given the role he is supposed to play on this team, Hamonic’s importance is heightened. With two offensive-minded defencemen in Quinn Hughes and Oliver Ekman-Larsson set to play heavy minutes on the left side of Vancouver’s top four, two defence-first blueliners were supposed to be paired with them.

Tucker Poolman was paired with Ekman-Larsson at training camp and Monday night’s preseason game in Abbotsford, while Hamonic, as a rugged stay-at-home defenceman, was the natural choice to remain with Hughes.

But if Hamonic doesn’t show, the trickle-down effect will be significant.

Tyler Myers could play with Hughes, but that would put two gunslingers on the same pairing. Travis Green has gone with that duo before, but usually only when the Canucks are trailing. That’s not exactly emulating the Chris Tanev partnership that was so successful for Hughes during his rookie season.

Myers could pair with Ekman-Larsson, leaving Poolman with Hughes, but does Myers really fit the profile of a guy you want playing against the other teams’s top line?

Then there’s Luke Schenn, who played a handful of games paired with Hughes, when Hughes first joined the team at the tail-end of the 2018-19 season. Schenn is a defensive-minded right-shot defenceman, but asking him to play top-four minutes is a big ask for a player pencilled in to be Vancouver’s seventh defenceman this season.

In short, relying on him in a top four role is not likely to be a path to success for the Canucks.

If Hamonic doesn’t play this season, the Canucks will get back the $3 million he was due to count against the cap. That opens up the possibility of signing someone in free agency, or potentially making a trade.

It’s slim pickings in the unrestricted free agent market now though. Puck-moving defenceman Jason Demers is the only somewhat-intriguing right-side option available, though at age 33, his best days are behind him. Demers was sixth in average ice time (17:14) with the Arizona Coyotes last season, contributing just four points in 41 games. He was second among Arizona defencemen in Corsi-for percentage (49.37%) to Jakob Chychrun, however.

Given that the Canucks haven’t picked in the first round in each of the last two seasons, and have already dealt away their second-rounder next season, moving yet another draft pick again isn’t wise. Would they move an up-and-coming player like Jack Rathbone for a player that fits a different profile? That’s a risky move also.

Right-side defencemen are never easy to acquire, but the Canucks would need to do something.

The Canucks have missed the playoffs in five of the last six seasons, so the pressure is on management. This team is expected to win now, and surely heads will roll if they go another year without playoff hockey.