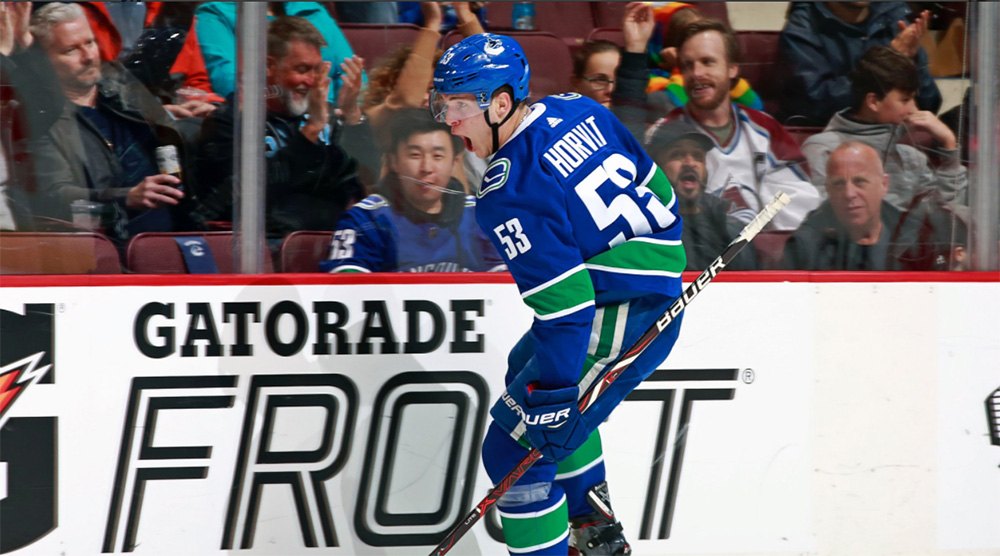 It took until the third period for the Canucks’ most potent scoring line to be reunited.

Without it, they were losing 3-2 after two.

And once Boeser, Horvat, and Baertschi were finally put together, they were magical.

Horvat’s Corsi-for percentage without Boeser: 57 percent. (with him – 80 percent)

Fact is the three of them just make each other better, and while I get the balanced lines argument, it’ll take a lot to convince me Vancouver has the weapons for that sort of thing.

The great thing about putting the Killer Bs together is it forces teams to focus on them, leaving the Sedins to take advantage of weaker matchups. They did that too, getting a few grade A scoring chances of their own in the third period. It also made the Canucks look like they had a couple of lines who could score.

Green, after the game: “It’s not just about where I play Brock. It’s about finding the right balance. Yeah, I’ll probably go with it next game.”

Yeah, he probably should.

Vancouver tied it up in the third and won the game 4-3 in overtime. Here’s Baertschi’s OT winner.

Nice dish from Sutter and what a finish from Baertschi.

This team, when healthy, can be fun to watch.

And now let’s hope they stay healthy because during that rash of injuries, this might’ve been the highlight of the game.

Vancouver didn’t just win on the scoreboard, overall they played a solid game. Even strength shot attempts through two periods were 32-24 in favour of the Avs, but that was due in large part to Vancouver taking a 2-0 lead halfway through the first period.

And the second one, from Michael Del Zotto.

Colorado was the better team for the 28 minutes after Vancouver took the lead, but while they deserved the goals based on shot production and effort, there was definitely some luck, or bad-luck involved too.

Here’s the first goal on Markstrom, where going with the soccer play probably wasn’t the best idea.

Colorado’s second and third goals – first, no this is not the same gif twice. It is, however, a great sales pitch for crashing the net.

It was Landeskog crashing him both times too. Tough to blame Markstrom for these. He had a solid game overall.

As good as the comeback was, you should note Colorado lost their best player and Hart Trophy candidate Nathan MacKinnon to an upper body injury early in the the second period. That may very well have caused the lull in the Avs play.

The other thing it did was allow Green to go away from hard matching Sutter against Colorado’s top line, meaning he could play the Killer B’s more.

Ice time in the first –

This isn’t the best angle of the game tying goal, but here it is – Daniel from Hank and Brock on the power play.

Aside from the Killer B’s the other big positive for Vancouver was their firs tunit power play. It was a joy to watch, and it made you wonder how people ever thought the Sedins should be split up or demoted from the unit completely.

It started with Bob McKenzie saying the Canucks’ number one priority is to try and re-sign Gudbranson.

It continued with Dhaliwal confirming the same story from Gudbranson’s agent’s side of things.

Then Iain MacIntyre came out with an article containing quotes from Benning echoing the same sentiment.

Then Elliotte Friedman said it too.

“The physicality and that dimension, certainly the loss of Dorsett has increased the need for that physical aspect of things, and he certainly brings that.”

“I think Erik’s an important guy in our room, he’s a leader for us. We’ll see where that path leads and if we can get something done, we’ll try to do it, and if we can’t, we’ll look to make a move.”

Now before you go flip over your table or worse, and boy, some of you were ready to…

Holy jesus somebody kill me.

… you have to realize that Canucks management has not delivered that consistent a message since September 2016 when they said they wouldn’t be trading their veterans come trade deadline.

And you know what happened there.

Consistent messaging from the Canucks? That tells me they’re working on something.

5. a) The Sedins’ looming decision

With Pratt looking like he’s going to make the “Will the Sedins return?” storyline his go to topic every morning until they provide an answer, it was hilarious to hear Botch’s response on Monday’s show.

You can listen here, but what Botch basically said, or yelled, is that the return of the Sedins is a non issue, and the Canucks should be doing the same thing at the trade deadline regardless (acquiring assets for the future).

Now, Botch is obviously on point here, but the problem is Vancouver’s GM said himself the Sedins’ decision will affect what he does.

Here’s what Benning said Friday afternoon when asked how the Sedins’ signing affects the trade deadline on Sportsnet 650:

“Well it’s just for future planning, mostly. You guys brought up Thomas Vanek who’s the second leading scorer on our team this year. Say the Sedins for some reason decided they weren’t going to come back next year, then it makes us think about maybe do we want Thomas signed going forward. Those types of situations.”

See, reading those words, the Sedin decision is huge.

Basically, according to Benning, if the Sedins tell the team they’re not coming back, it could cost Vancouver the draft pick or prospect they stand to gain by trading Vanek.

5. b) There is no looming decision for the Sedins

With Benning lighting a fire under the speculation surrounding the Sedins and what it does to the team’s goals at trade deadline, should fans be worried?

The most amazing point about this story, the one that everyone is missing (perhaps willfully in Pratt’s case?) is the Sedins already said what they want to do.

This entire discussion began because Sportsnet’s Chris Johnston reported the Sedins have indicated they want to return.

Then, last Tuesday, when Henrik was asked about it directly, he responded: “It feels like we can play in this league and put up points, and that’s all we wanted to know before the season.”

You don’t really need a degree in reading between the lines to see what Henrik’s saying, do you?

Meaning the only question now is what they’ll be paid.

And if you think that’s any sort of issue at all, you must think the Canucks will be a Cup contender next year, needing to carefully piece together its abundance of skilled players under the salary cap.

Instead, maybe you’re like me, and you see that they’ll probably come back for somewhere between $4-$6 million, and it doesn’t really matter how much they’re paid because their value as mentors for the young players is worth more than the need to sign other veteran free agents.

Trevor Linden was asked about the Sedins’ decision on TSN 1040 Tuesday.

“My assumption would be that they would take the year and sit down at the end of the year and take stock of where they are physically and mentally, sit with their families and see what the future looks like.”

“These guys have earned the right to make their decision when they feel it’s the right time. We’re not going to put any pressure on them to give us an answer by a specific date.”

Not exactly what his GM said, now is it?

Benning was also asked how the market for Vancouver’s impending free agents is looking at the moment.

“I think as we get closer to the trade deadline… see the problem right now is the teams are so close that they don’t know yet if they’re buyers or sellers.

There’s a clump of teams in both conferences that are right in the mix of making the playoffs or falling out.”

Wait, this is a bad thing?

A lack of sellers, an abundance of teams who think they’re one or two players away from making the playoffs – this is not good?

If you’re doing this right as a GM, you’re on the phone with all those bubble teams right now, driving up the price on Vanek and Gudbranson while the bidders list is as large as it will get.

Of course, maybe he is doing that. Maybe he’s just playing it coy.

Laurence Gilman’s answer, when asked what he’d do going into the trade deadline were he in charge of the Canucks right now:

“If you’re asking me what I would do in this instance, based on where the Canucks are … I like to look at myself as a realist and if I’m calling the shots here, looking at where they are, I don’t think there’s any point in having the 10th, 11th, or 12th pick in the draft when you can have (Blake interjected “3,4,5,6” here).

If I were in the decision making position, given the fact that one of the byproducts of parity in the league is you have so many teams in it, there are very few sellers – following along with your question, what I would be doing right now is I would be getting on the phone, and I would be making calls to 30 general managers, and I would be telling them that more or less, outside of Brock Boeser, Bo Horvat and Henrik and Daniel Sedin, we’re willing to listen to offers on any one of our players.

That right there, loyal SixPack readers, is why Gilman is one of my top picks for GM of the Canucks next year (I mentioned this on the Black Aces Podcast).

He gets it. Simple as that.

The best moment during Linden’s interview on TSN 1040 on Tuesday. Matt Sekeres:

Trev, I can understand that in the first or the second year – you say there’s no quick fix, but this is year four. I mean, how much longer should these fans anticipate this continues?

Linden’s answer was his usual “stay the course” stuff, but that question from Sekeres, and really, the entire interview by him and Blake Price. After we were subjected to Andrew Walker’s “round table” discussion with Linden earlier this season, they deserve this. They really do.