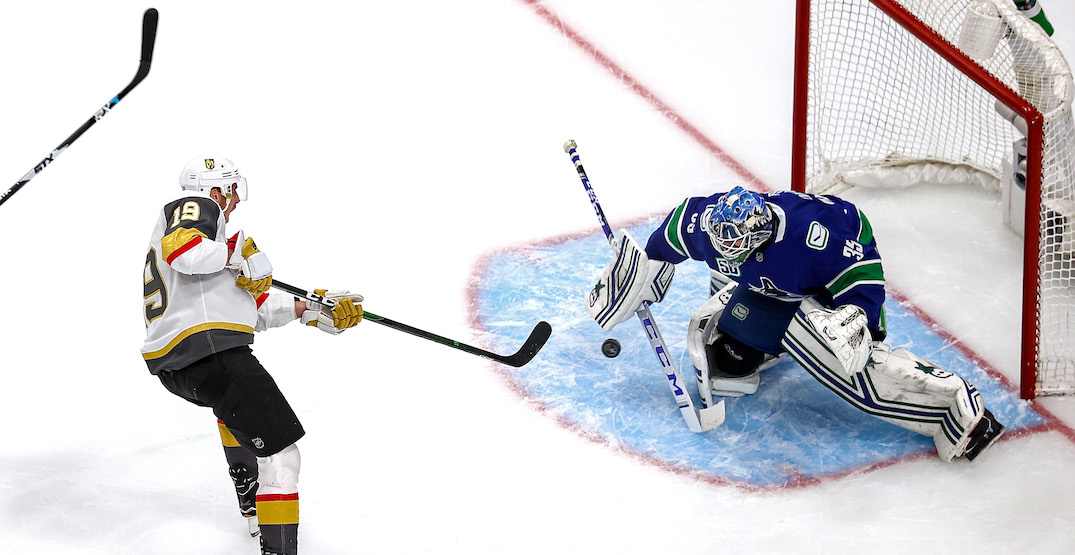 Way back in August, 2020, Thatcher Demko was merely a man.

But now, after two straight playoff wins, the rookie netminder is now a Vancouver Canucks legend.

That’s the kind of hype that has to be engulfing the Canucks 36th overall selection from the 2014 draft after he’s single-handedly extended Vancouver’s season with 90 saves in back-to-back wins.

His brilliance was on another level on Thursday, as he registered a 48-save shutout in a 4-0 win.

It was a jaw-dropping and historic night on so many levels for both young Demko and for the fan base.

As he prepares to do it all again tonight in Game 7, here are seven astonishing facts behind the 24-year-old’s playoff performance to date.

1. He set a new franchise record for most saves in a playoff shutout

Demko's 48-save shutout sets a new #Canucks playoff record for most saves in a shutout. Previous record was held by Kirk McLean (39 saves) against Dallas in 1994.

Demko’s Game 6 performance is one of the greatest goaltending performances of all-time.

Aside from setting the franchise save record in a shutout, Demko also became the first Canucks goalie in 28 years to record a shutout in an elimination game. Kirk McLean was also the last Canucks goaltender to accomplish that when he did it back in 1992.

2. NHL record number of saves in a playoff shutout by a rookie

Demko nabbed this NHL record, and he did it with 11 saves to spare.

New York Rangers goaltender Mike Richter was the rookie record holder here for nearly 30 years, when he recorded a 37-save shutout in a Conference Quarterfinals win against the Washington Capitals in 1991.

Third place on the list has a Canucks connection. Corey Crawford registered a 36-save shutout as a rookie in Game 5 of the Canucks series win against the Chicago Blackhawks in 2011.

Let’s forget about that, and shift back to Demko.

3. Most saves ever in a playoff shutout in regulation

Demko doesn’t just have the rookie record here, but the NHL record.

Four other goalies have recorded 50+ save shutouts during overtime wins. Craig Anderson did it most recently back in 2010 against the San Jose Sharks when he was a member of the Colorado Avalanche, making 51 saves in a shutout overtime win.

Demko slots into fifth on the all-time save list during a playoff shutout, and he made all those saves in regulation.

4. New record for saves in a regulation playoff win by a rookie

Only four other rookie NHL goaltenders have registered more saves in a win, and all of those were in overtime.

Demko was mentioned in the same breath as Jose Theodore this week when he became the first rookie goalie since Theodore in 1997 to win an elimination game. The 2001 Hart Trophy winner was also one of the four goalies to register more saves in a win as a rookie, when he stopped 56 shots in an overtime win against the New Jersey Devils 23 years ago.

The 48 shots that Demko faced last night were the 17th most faced by a rookie goaltender in the playoffs…ever. How he managed to stop all 48 of those is still hard to believe.

A chunk of fans are likely pondering if we just saw the greatest goaltending performance in Canucks playoff history.

That might make many of you might think back to Roberto Luongo, who had a few dandies in the playoffs but most notably, is 72-save in quadruple overtime versus Dallas (in his first career playoff start, no less).

However, Demko’s performance was the best by any Canucks goalie in regulation, and it ranks as the fourth-most saves in a win by a goaltender in franchise history.

It breaks the record previously held by Cory Schneider, who made 43 saves in a playoff regulation win for the Canucks against the LA Kings in 2012.

6. Most saves in two consecutive starts by a playoff rookie

By registering 90 saves in his first two playoff starts, Demko now has the most saves in two consecutive starts by a rookie.

His incredible performance is even better than some of the best we’ve seen from rookies in recent memory. Matt Murray allowed two goals in a 47 save-win against Washington. Petr Mrazek also had a 44-save win for the Detroit Red Wings against Tampa Bay in 2015.

Braden Holtby was another goalie to face a lot of rubber in the playoffs as a rookie. He has two 40+ saves wins in three games against the Boston Bruins in 2014.

Still, no rookie has matched what Demko just did for the Canucks.

It’s never a bad thing to be mentioned in the same breath as the guy who invented the goalie mask.

For the record, Plante’s performance helped Montreal win the Stanley Cup over the Boston Bruins that year.