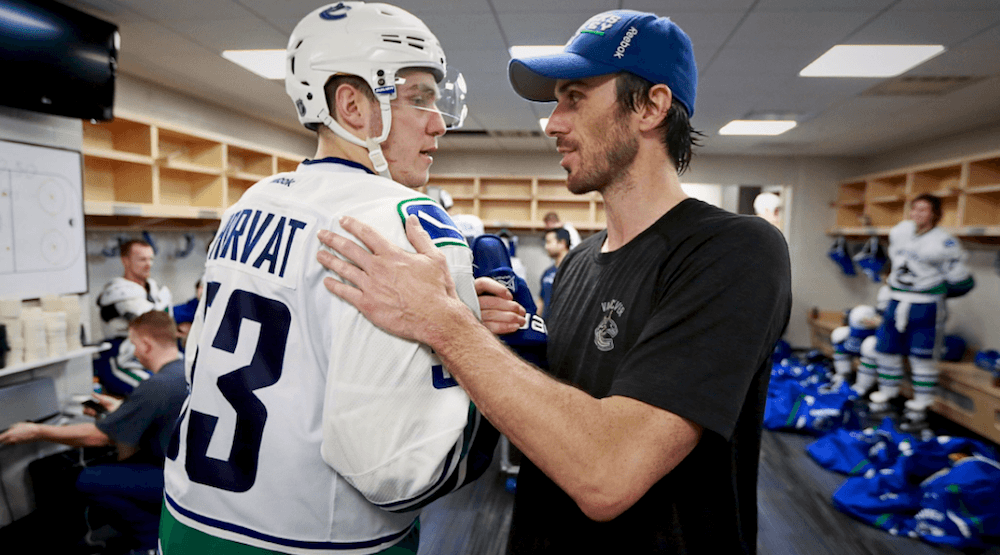 The following article was written by guest author Harman Dayal

With the All-Star break upon us, the unofficial first half of the season has passed. League parity has left the Canucks in a tweener position 50 games in, as the team is just one point away from a playoff spot, while only three points up on the 28th place New Jersey Devils. While the team’s overall performance hasn’t been spectacularly good, nor bad, there has been variance in the play of individuals on the team.

With that being said, let’s hand out some All-Star break report cards.

*Note: Grades are based on player performance contrasted with expectations coming into this season. 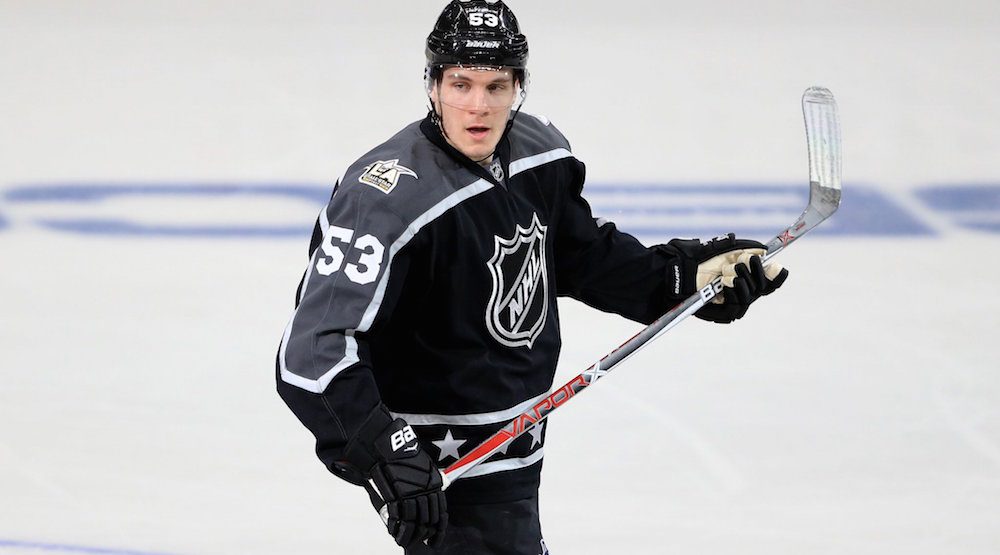 Sven Baertschi struggled out of the gate this season with just two assists in his first 13 games. He’s heated up since then however, with 21 points in his last 29 games. What’s most impressive is that 22 of his 26 points have come 5-on-5, putting him 51st in the league in even strength points.

Alex Burrows has quietly put together a solid bounce-back season with 16 points in 44 games. The 35-year-old pending UFA has proven to be a great fit alongside Horvat and Baertschi.

Expected to play primarily in Utica this season, Michael Chaput has offered little in the way of offence, but has settled in as a reliable centre between Jack Skille and Brendan Gaunce.

Derek Dorsett opted for surgery to repair a neck injury in November and has only played just 14 games. He is out indefinitely.

Despite being recently reunited with the Sedins, Loui Eriksson is on pace for a meagre 34 points. His even strength 2.0 GF/60 is also at a nine-year low, and puts him just 15th on the team. A strong second half might be in the cards for Eriksson though, as his shooting percentage is abnormally low at 9.9%.

Gaunce has just four assists on the season, but has been a serviceable 4th liner. His team leading 52.1% Corsi is a testament to his responsible defensive game.

Tied for third on the team with 12 goals, Markus Granlund has provided valuable secondary scoring on a team starving for goals. The 23-year-old has finally settled in as a middle-six forward.

Unfortunately, Jannik Hansen has found himself battling injuries for much of the season and has only appeared in 18 games. With his absence from the lineup, his usual spot alongside the Sedins has been a revolving door.

After 40 points in his sophomore year, Bo Horvat has continued his offensive growth with a team leading 32 thus far. More impressive is that he led the Canucks with 55 points in 82 games in the 2016 calendar year. Horvat has done all this despite only ranking seventh among forwards in even strength ice time.

With the absence of Hansen, career AHLer Jayson Megna has found himself bouncing up and down the lineup. Despite averaging close to 12 minutes a night, Megna has mustered just 6 points.

Lack of deployment and lingering knee issues have limited Anton Rodin to just three games. He is still out indefinitely.

No longer are the days when the Daniel and Henrik Sedin can carry the team by themselves; as they’ve combined to tally just 59 points in 50 games amidst the loss of Hansen. While age is undoubtedly catching up to them, the Twins are still legitimate top-six players with the potential to dominate from time to time.

Just like Gaunce and Chaput, Skille has been an adequate option on the fourth line. The former seventh overall pick brings speed and grit to the bottom-six corps.

With 24 points in 50 games, Brandon Sutter is on pace for his best offensive season since his rookie year. However, part of this is due to being second among forwards in average ice time, and third in power play time.

Alex Biega has found his way into the lineup recently, but has still just appeared in 18 games.

Alex Edler got off to a rough start to the season; one that resulted in the split of the Edler/Tanev pairing. Since being paired with Stecher however, Edler has looked much better with his possession metrics continually improving.

For a guy commended for his defensive game, Erik Gudbranson has been far from sound, with a 55.9 Corsi against per 60(CA60) that puts him last among defenceman on the team. His lack of mobility and puck moving ability has been regularly exposed.

After an impressive rookie year, Ben Hutton has had a tough time with turnovers and off the puck play. He’s also struggling to push offensive play, with a CF60 that puts him third-last among d-men.

Philip Larsen’s 18-game stint has shown us that he isn’t quite the solution to the team’s PP woes.

Luca Sbisa’s lack of ability to push offensive play has resulted in poor possession metrics on the surface. That being said though, Sbisa has really cleaned up his defensive game and has stepped up well amidst key injuries to the blueline.

With injuries mounting early, Troy Stecher has seized the opportunity to play on the top pair with Edler. Stecher has been fantastic at both generating and suppressing shots, with CA60, CF60, and CF% numbers that put him top-three across the board. His ability to get pucks to the net on the power play has also been a huge asset.

On the surface, Chris Tanev’s poor underlying metrics are concerning. Tanev is sixth-worst among all NHL defenders with a CF60 of just 45.2. Context is key though, as Tanev has been paired with another defensive defenceman in Sbisa, thus making it difficult to push offensive play. Tanev’s CA60 figure however, is 19th in the league; indicating he is still a premier shot suppressor.

Nikita Tryamkin has been everything Gudbranson was supposed to be. Tryamkin has provided a big, mobile presence along with a long reach and decent first pass. His positive possession metrics relative to other defenders on the team reflects this. 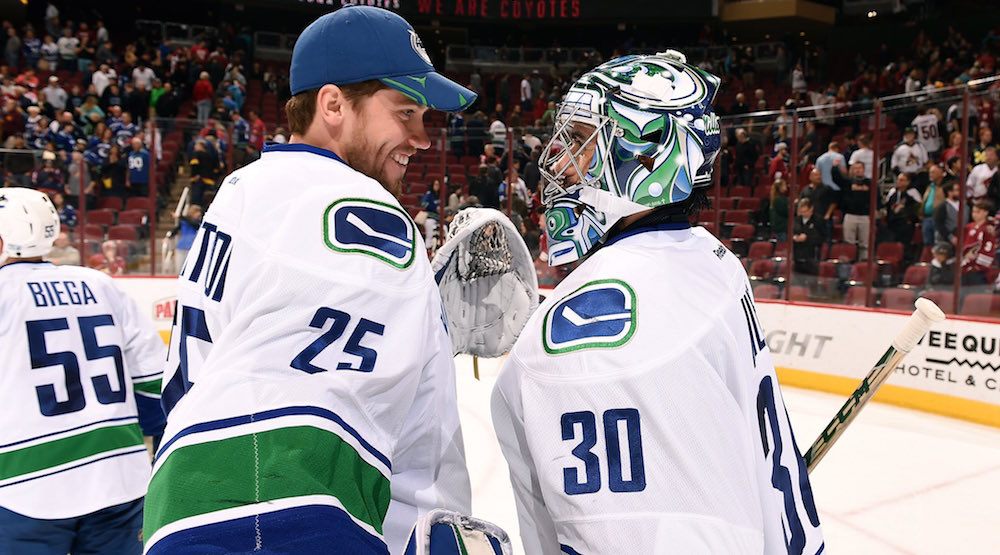 Ryan Miller has bailed out the injury riddled defence this season with an impressive 2.48 goals against average and 0.920 save percentage. Miller’s solid play has opened up the possibility of bringing the 36-year-old back next season.

Jacob Markstrom has shown flashes of great play, but has ultimately been plagued by weak goals. His 2.56 GAA and .913 save percentage are on par with league average. Consistency is the key moving forward for the Swedish netminder.