While the Trans Mountain Pipeline Expansion Project may no longer have that lingering May 31 deadline hanging over its head, that doesn’t mean that the polarizing division it has caused is anywhere close to being gone.

When the Federal Government announced it would purchase the project on May 29, it took away the risk that Kinder Morgan would pull out of the project to protect its investors.

Now, however, that decision has seemingly split the country right down the middle, with a recent report from Angus Reid showing that an equal percentage of Canadians surveyed state that purchasing the pipeline was the right choice compared to those who believe the opposite. 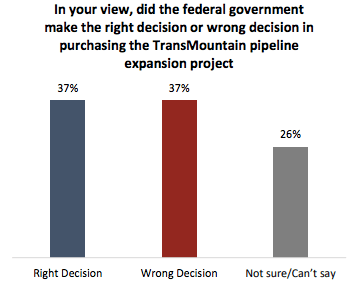 Both sides added up to 37% of Canadians surveyed, with the remaining 26% stating that they were not sure/couldn’t say if the Federal Government’s decision was the right one.

The survey was conducted online between June 7 and 10 with a representative randomized sample of 1,021 Canadian adults.

The survey also found that the BC respondents were just as divided as Canada as a whole, with both sides reaching 38%.

Alberta, on the other hand, was far more in favour of the pipeline purchase than any other province, with 51% stating that it was the right thing to do, and only 28% believing the opposite.

The number one reason that Canadians across the country believed the purchase to be the right decision was that, according to the survey, “the TransMountain project is a good investment for Canadian taxpayers,” while the number one reason against was that the Canadian government should not be in the business of owning a pipeline and that it sets a bad precedent for the future.

Even though the country was evenly split on whether or not the purchase was a good call, the same cannot be said about how Canadians feel about the BC Government’s continued opposition to the project, which remains firmly against John Horgan’s NDP government.

Looking at BC respondents only, the percentages are still at odds with the BC Government, with 56% against and 44% in favour. 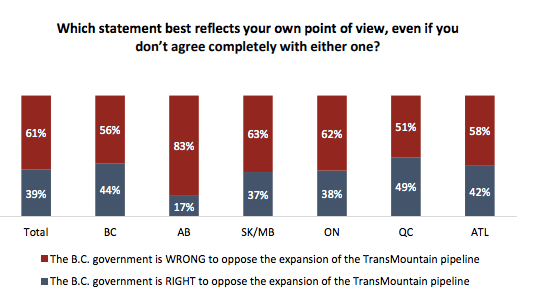