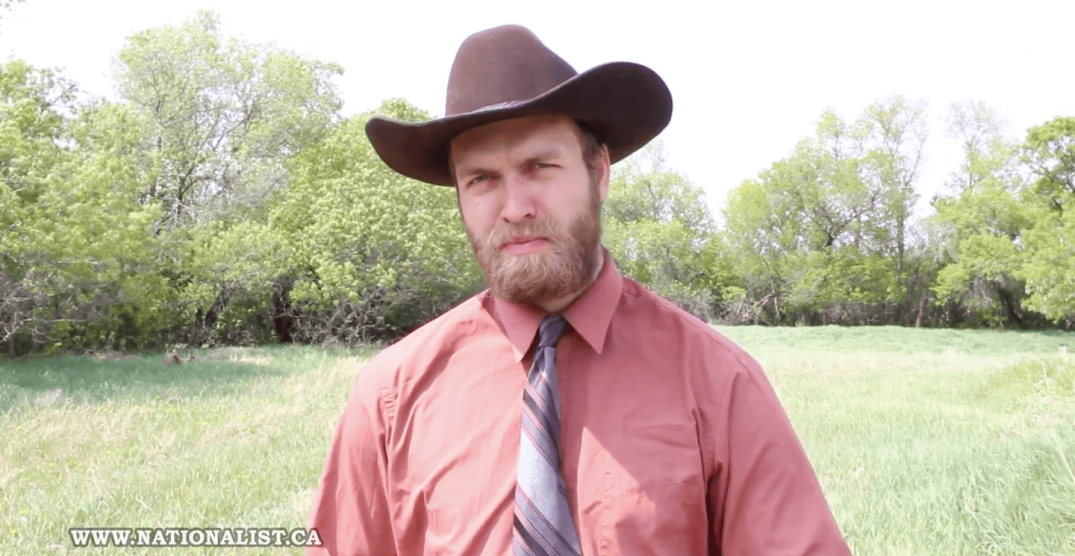 The Canadian Nationalist Party, an anti-immigration, anti-Semitic party, that touts authoritarian ideas and racial demographic policies as some of its key platform positions has received official party status from Election Canada.

In a post to their website, the group added a copy of a letter from the regulator indicating that they had been accepted as a political party.

“I am writing to inform you that the review of the application to register the ‘Canadian Nationalist Party / Party Nationaliste Canadien’ has been completed,” the letter reads. “The Party has met the requirements of the Canada Elections Act and will be eligible to be registered for the upcoming general election.”

Election Canada confirmed the party’s new official status. The Canadian Nationalist Party has approved under the Elections Act and a representative told Daily Hive there is no mechanism for them to disqualify a party based on ideology. They are now capable of balloting candidates in the upcoming election and issuing tax receipts to their donors.

Election Canada’s letter is addressed to Travis Patron, who founded the group at the age of 25 in 2017, according to the party’s website. He has already announced his intention to run in the Souris—Moose Mountain riding, in Saskatchewan. 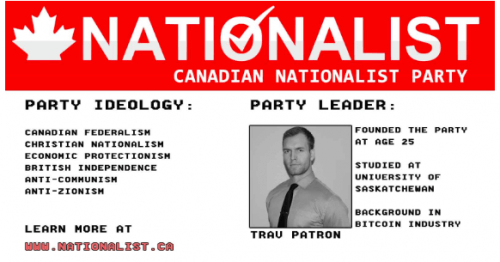 In what appears to be the party’s own recording of an interview with the CBC, posted to the group’s website, Patron claims the media has misrepresented its policy positions and members are being targeted. The organization also gives space on the same page to define itself as “pro-British,” and “anti-Zionist.”

While claiming in the interview that accusations against the party being a hate group are unfounded or hypocritical, it makes its policy positions clear as firmly acting in the interests of Christian European Canadians, working towards the development of Canada as a White ethnostate.

“We advocate for ethnocentricity because we believe any political stance is rooted in identity. That is, the unifying factor of a country is understood to be a common tradition, lineage, and language,” the About section of the group’s site reads. “In 1971, 97% of Canada’s population was of European-descent. In 2019, this number now stands at a diminished 64%. Therefore, we demand this demographic change (an agenda put forth by Pierre Trudeau and accelerated by Justin Trudeau) be discontinued immediately.”

Other policy positions include the “withdraw from the 1969 Convention relating to the status of refugees,” “revise if not repeal legislation such as the Bill of Rights and the Charter of Rights and Freedoms,” and “repeal the Multiculturalism Act of 1988, Immigration and Refugee Protection Act (IRPA), the Employment Equity Act, Bill 69, and revoke Motion-103 Anti-Islamaphobia,” as well as the plan to establish a “Monarchical policy” that would establish a national decision making authority “above the democratic system.”

According to Bernie Farber, the chair of the Canadian Anti-Hate Network (CAHN), an organization that monitors and advocates against neo-nazi and hate-based groups in Canada, his group will be accessing the public Elections Canada information to determine who gave the party the 250 signatures required to register.

“We’re not going to be releasing addresses and phone number or anything like that,” he told Daily Hive. “But people have the right to know who is in their community.”

Farber says the Nationalist Party goes well beyond the title of alt-right, and openly advocates against Jews, Muslims, and the LGBTQ community. Ultimately, Farber says the CAHN would like legislation to be passed that prevents groups that discriminate against others from participating in the political process.

“I’ve been studying neo-nazi groups for decades,” he said. “This is likely one of the most dangerous times I can remember.”