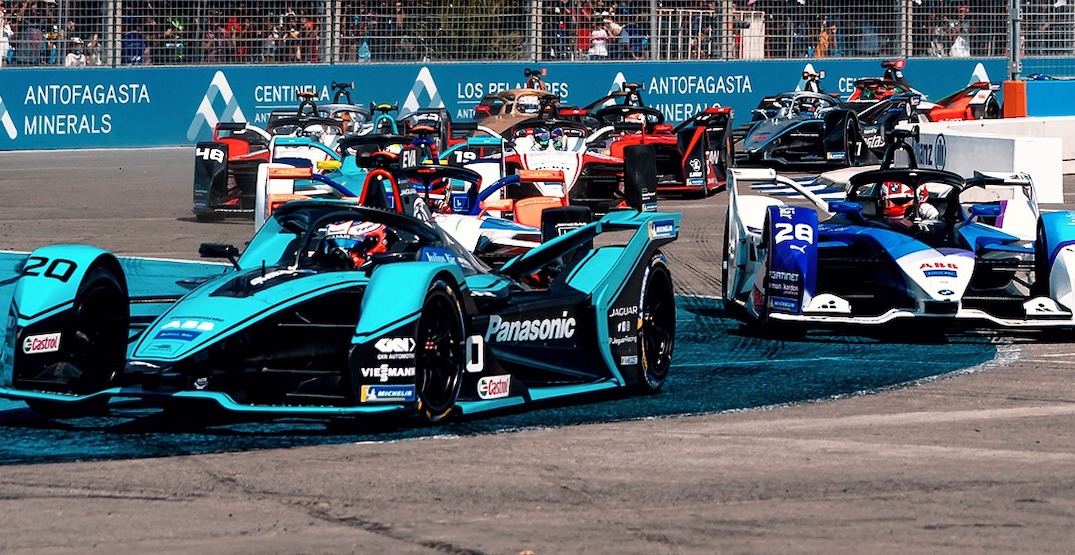 The Canadian E-Fest, featuring the ABB FIA Formula E World Championship race, in East False Creek in downtown Vancouver will be even bigger than previously planned.

This will be Formula E’s most multifaceted event ever, and it has the makings of being the largest event in Vancouver since the 2010 Olympic Winter Games.

“People are excited about this event. The excitement and enthusiasm from residents has been overwhelming, so clearly we have a great deal of race fans here in the city,” said Vancouver city councillor Sarah Kirby-Yung during the press conference.

Elite racers from around the world will take to the street circuit in Northeast False Creek on the final day for the electric-battery car race’s practice event, qualifying events, and championship event.

This will be preceded by a celebrity race on Friday, featuring 12 celebrities — each driving one of 12 Vancouver electric car maker ElectraMeccanica’s three-wheeled, single-seat Solo vehicle. Canadian Olympians Charmaine Crooks and Alexandre Bilodeau and local actor Jason Priestley are amongst the celebrities named so far for the non-elite fun race. 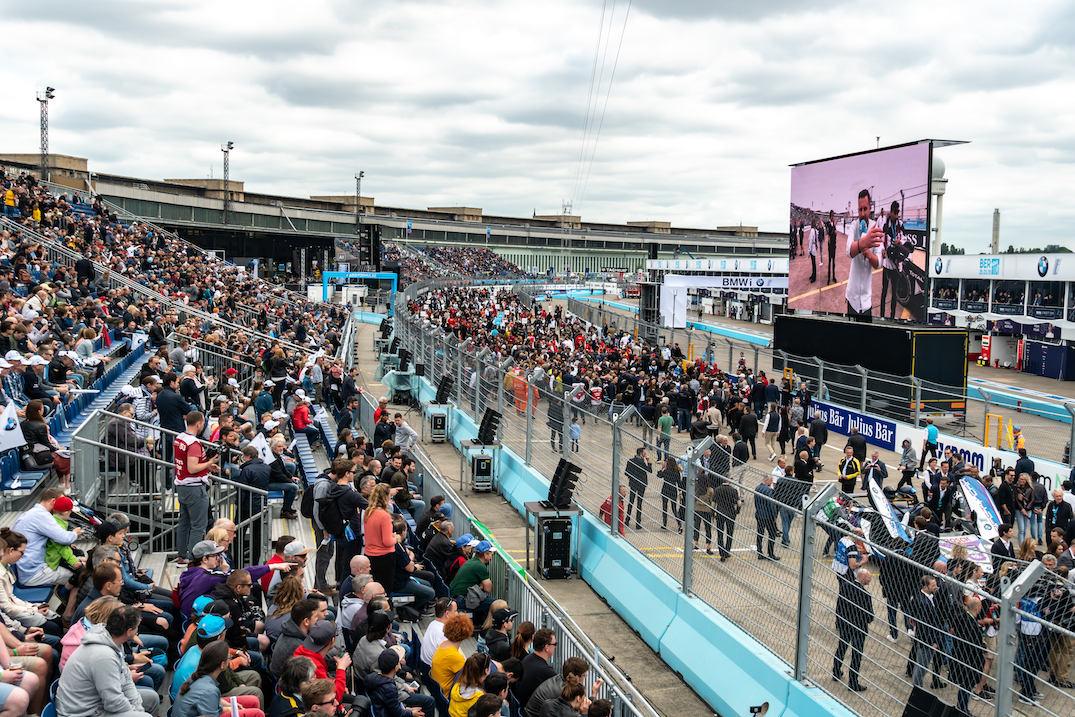 Grandstands lining the street circuit — along Pacific Boulevard and Quebec Street, and within the Concord Pacific lands — will provide the race with a capacity for 56,000 spectators for each day of racing.

Beyond the street circuit, Northeast False Creek will be fully activated with events and festivities, transforming it into an electric village.

German finance firm Allianze, one of the race’s main sponsors, will take over Creekside Park to turn it into Allianz E-Village — a massive fan zone with entertainment, exhibits, and food, alongside all the racing action. 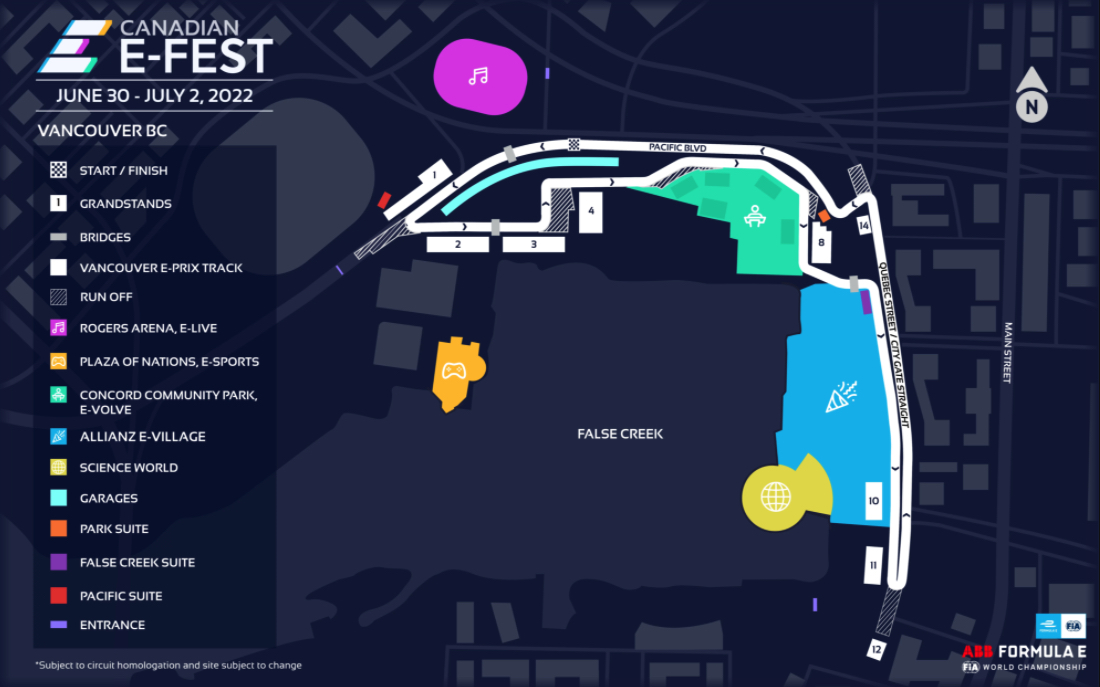 Additional components to Canadian E-Fest include E-Live, which is a concert series on the last two nights at Rogers Arena (instead of previous plans to hold the concerts at BC Place Stadium). The full lineup of artists will be announced at a later date.

Organizers will also stage an esports tournament, starting with qualifying rounds throughout the spring and culminating with the live qualifier and finals held at the former Edgewater Casino building at the Plaza of Nations. Competitors will vie for a share of the $50,000 prize pool. 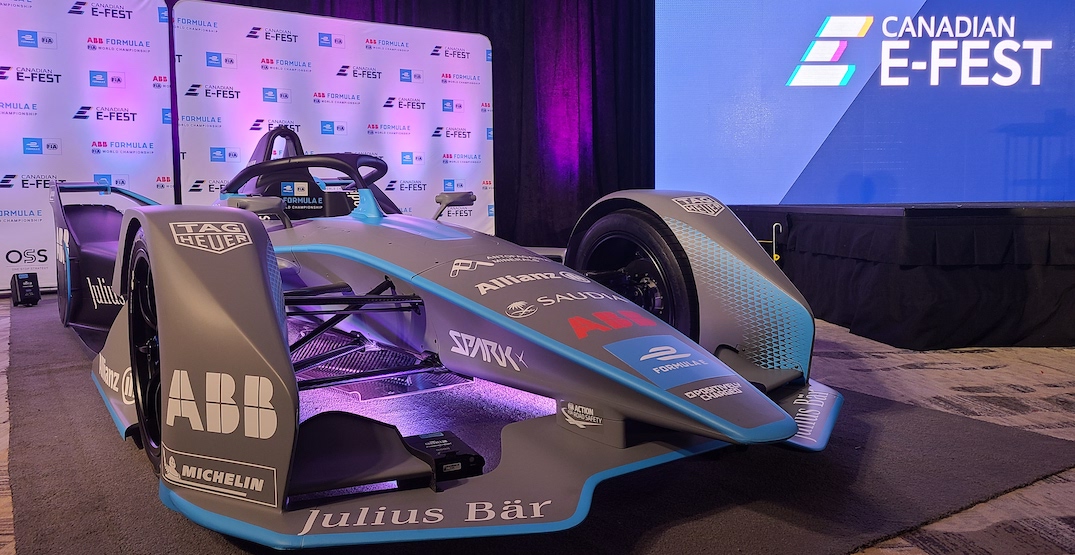 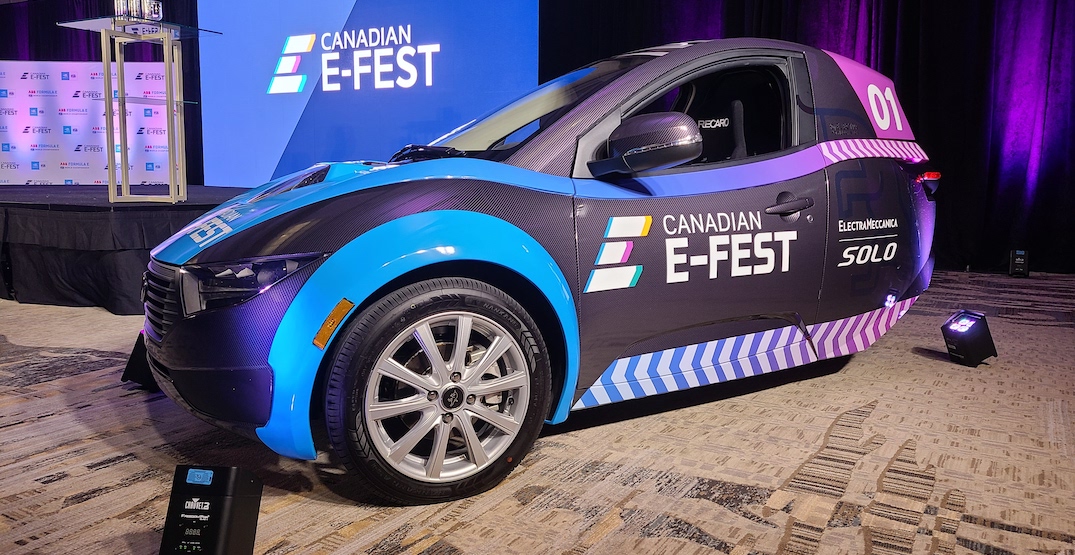 ElectraMeccania’s Solo electric vehicle will be used for the celebrity races at Vancouver Canadian E-Fest in 2022. (Kenneth Chan/Daily Hive)

More details on all of the event components will be released in the months to come.

The announcement of ticket sales for the Formula E race is set for the coming weeks, with race tickets starting as low as $25.

“There’s something for everyone, fun for the whole family,” said Canadian racer James Hinchcliffe, who is the ambassador for Vancouver’s inaugural event. He noted the entire format of Canadian E-Fest is unique to Formula E.

The surge in tourists from around the world and the activities of local organizers are expected to generate $80 million in local economic spinoffs and create about 3,000 jobs. Organizers have committed to covering all costs of staging the event, including all municipal costs such as policing, sanitization, and traffic management.

Vancouver is the ninth of 12 stops in the 2022 Formula E World Championship calendar, which starts in Diriyah in Saudi Arabia in January 2022 and ends in Seoul in August 2022. Other races are scheduled for Mexico City, Cape Town, Rome, Monaco, Berlin, New York City, and London.

“It has been about three years without a race in Canada, and we’re very glad to be back,” said Alberto Longo, co-founder and the chief championship officer of Formula E.

This also represents Vancouver’s first car race since 2004, when the last Molson Indy was held in the same area.

This is the official venue plan and race circuit of #FormulaE in Vancouver!

Even more will be happening Canada Day 2022 race weekend, June 30 to July 2. More than just the race. #FIA #CanadianEfest pic.twitter.com/xyE1XYO625