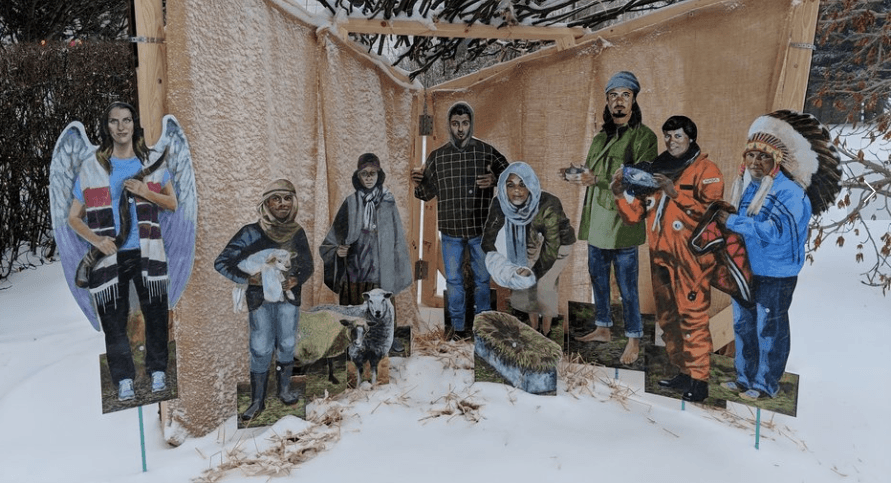 Nativity scenes are a common sight this time of year. Animals, angels and wise men, typically gather around a baby Jesus, as his earthly parents look on. The faces and symbols are familiar, crosses, glowing stars, shepherds and sheep surround a simple manger.

One church in Red Deer, Alberta, however, is bucking that trend.

And while a new approach to the Nativity is not a unique concept — like the Montreal Oratory that featured a selfie-taking, man-bunned Joseph — the Red Deer Lake United Church as made one that’s distinctively their own — and dare we say, Canadian.

In the outdoor scene, large cut-outs of painted figures are housed in a wooden lean to. A dark-skinned Joseph is dressed in jeans and a plaid shirt, the clothes of a labourer. His wife, Mary, is picking up their newborn, the top of her head covered in a hijab.

“By contemporizing some of the traditional imagery and by decolonizing some of the characters,” the over 100-year-old church writes on its website. “The hope is to create a scene that sparks curiosity, engagement, and wonder, and causes people to hear that invitation and enter into this story in a new way. ”

The Nativity also includes the traditional three Magi. Though here they are not kings but figures meant to personify diversity and inclusion. Each from a different culture, showing the power of cross-cultural wisdom.

One, wearing a feathered headdress and offering a symbol of warmth with a blanket, is the current National Chief of the Assembly of First Nations, Perry Bellegarde of Treaty 4 territory. 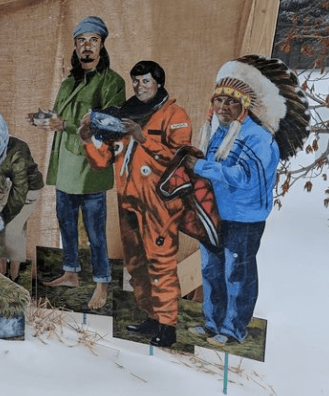 Another is Dr. Roberta Bondar, Canada’s first female astronaut, bringing the gift of knowledge symbolized in the “Milky Way” constellation she is holding.

The final dreadlocked Magi is American songwriter and musician, Michael Franti, known for his messages of love and hope, he brings the gift of music.

The shepherds that flank them are portrayed as poor teens reflecting the “reality of third world shepherds today.” 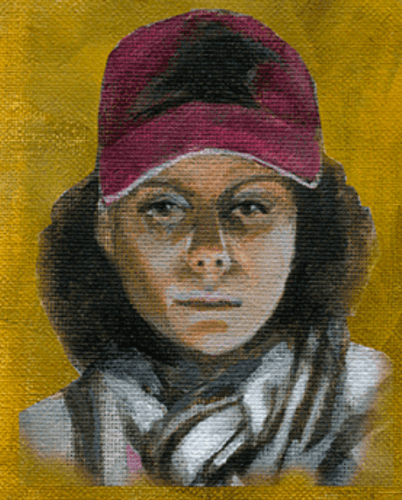 Even the Angel, a woman with long auburn hair, is holding a shofar — an instrument made from a ram’s horn used in Jewish religious practices.

“Since the 14th century, European master painters have formed our visual opinion of what the nativity looks like, thereby shaping what it can mean,” explains the artist, Larry Stilwell. “As a Christian, I embrace the values of inclusivity but haven’t found those values reflected in traditional nativity scenes.”

For this reasons, Stilwell says he chose to step away from tradition.

“[I wanted to] develop a nativity installation that comments on homelessness by giving the stable a temporary, intentionally unsubstantial feel, a physical reflection of the emotional state of a presumably teen mother in an occupied land.

“The intent of this scene is to invite the observer to engage and re-discover the awe and wonder surrounding Jesus’ birth and what it means for us.”