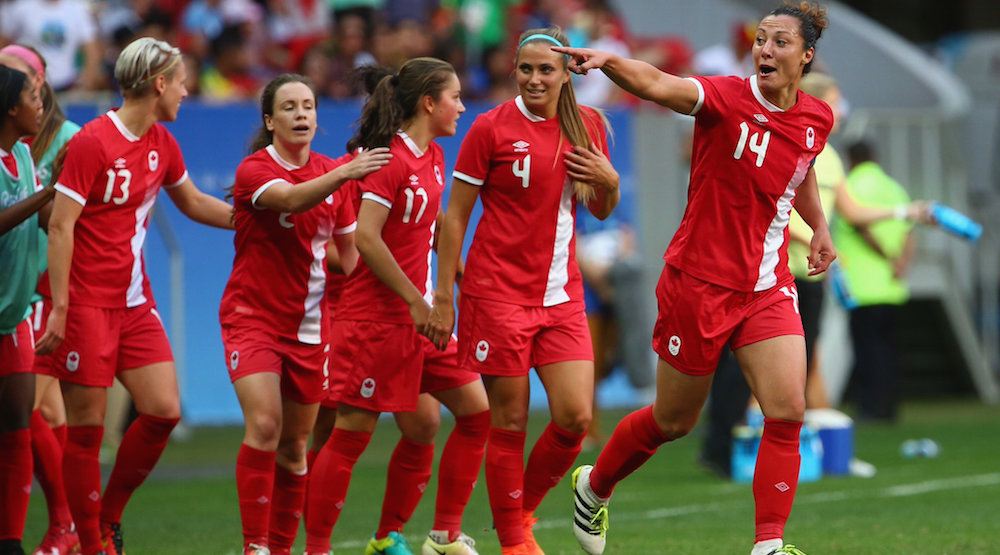 Canada has earned a historic victory against Germany in women’s soccer, defeating the #2 team in the world 2-1 on Tuesday. It’s the first time Canada has ever defeated Germany, having lost the previous 12 matches against the European powerhouse.

Canada had a trip to the quarter-final clinched before this game started, so head coach John Herdman rested some of his players, most notably captain Christine Sinclair and leading goal scorer Janine Beckie. He was also without the services of Kadeisha Buchanan, Canada’s best defender, who was suspended for yellow card accumulation.

Germany got off to a great start in this one. Melanie Behringer scored for the Germans in the 13th minute after a penalty committed by Canadian defender Allysha Chapman.

Canada, undeterred, fought back, getting a goal from Melissa Tancredi in the 26th minute. Tancredi made the Germans pay for a poor giveaway, scoring on a left-footed shot from just inside the 18-yard box.

The match remained tied at one heading into halftime.

#CanWNT Melissa Tancredi evens the score against #GER. 1-1 in the 1st half. Watch NOW https://t.co/TbdPDVWAaK https://t.co/vhoyywFn21

Then, off a free kick in the 60th minute, Tancredi scored again to give Canada a 2-1 lead. Rebecca Quinn, sent a lovely ball to the edge of the six-yard box that Tancredi connected on with a strong header.

The bronze medal winners from four years ago held on from there, getting a game-saving save from defender Josee Belanger in time added on.

#CanWNT Josée Bélanger saves a goal against #GER in the final minutes #CAN #Rio2016 https://t.co/TbdPDVWAaK https://t.co/Btw5Dr7tq5

Ironically, the win comes in a game that Canada likely would have benefitted from a loss – they will likely have a tougher quarter-final match. Germany would have also benefitted from not winning this one. To both teams’ credit, they each appeared hungry to win this one.

Canadian goalkeeper Stephanie Labbe was busy in this one, as Germany had 22 shots (six on goal), compared to six for Canada (four on goal).

The Germans also dominated possession, controlling the ball for 67% of the match, and had 14 corners to two for Canada.

Canada will advance to the quarter-finals as the winner of Group F, prevailing in the so-called ‘group of death’ with a 3-0 record. They will face the runner-up of Group G in the quarters on Friday.