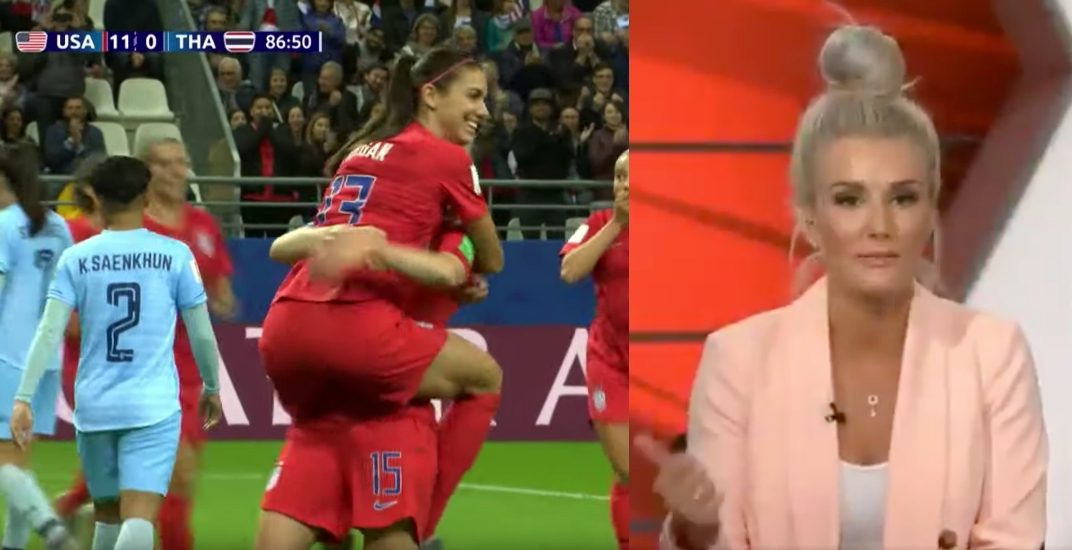 After a Women’s World Cup record-setting 13-0 blowout of Thailand, all the talk surrounding USA’s opening-match victory was about their over-the-top celebrations.

The defending World Cup champs and No. 1 team in the world, the Americans did not go easy on the 34th-ranked team from Thailand.

USA put the boots to them, burying six of their 13 goals in the last 16 minutes of the match.

After scoring the 9-0 goal, Megan Rapinoe twirled around before sliding and giving a few leg kicks. You would have thought she just scored a big goal in a knockout round match.

Two minutes later, Alex Morgan scored her fourth goal of the match (she would finish with five). She proceeded to count the goals on her fingers.

For all that have issue with many goals: for some players this is there first World Cup goal, and they should be excited. Imagine it being you out there.This is your dream of playing and then scoring in a World Cup. Celebrate.Would you tell a men’s team to not score or celebrate?

Couple of problems there.

To start with, the most egregious showboating came from Rapinoe and Morgan – two of the most experienced players on the team. Rapinoe is USA’s captain and has made 152 international appearances, scoring 44 goals. Morgan has made a 162 appearances for USA, and is one of the all-time leaders in goals with 101.

Both players are playing in their third World Cup – and won the championship four years ago in Canada.

They rightly blasted the Americans for their conduct.

The harshest criticisms came from Kyle. For her, the issue wasn’t about being male or female. It was a Canadian/American issue.

“As a Canadian, we would just never ever think of doing something like that. We’ve played against the Americans before, where you have a player of Christine Sinclair scoring three goals (at the London 2012 Olympics) and she would never ever think of counting how many goals she has on one hand.

“For me, it’s disrespectful, it’s disgraceful.”

These comments spread like wildfire on social media and Kyle said on Instagram that she has received death threats because of them: 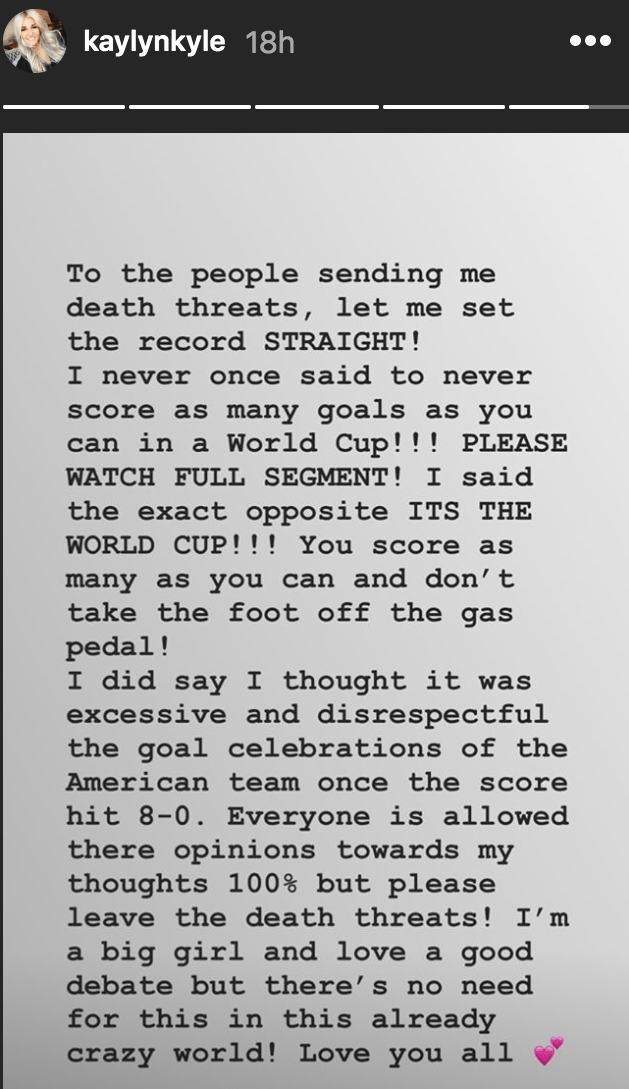 For their part, the Americans have been unapologetic.

“I think our only crime was an explosion of joy last night,” said Rapinoe.

“I think it’s disrespectful if we don’t show up and give our best and play our game for 90 minutes,” Morgan explained. “It’s disrespectful to the Thai team. I believe they wanted us to play them straight up.”

Megan Rapinoe gets in on the fun as she converts on a terrific pass.#FIFAWWC pic.twitter.com/joSCtFrUaf

What the American players don’t seem to understand, is that they can play their best without rubbing it in. How they celebrated – particularly Rapinoe and Morgan – showed a complete lack of sportsmanship.

The Canadian broadcasters aren’t backing down either, reinforcing that their problem was not with first-time goal scorers or running up the score. The criticism is squarely on players like Rapinoe and Morgan, who should have shown an ounce of class.