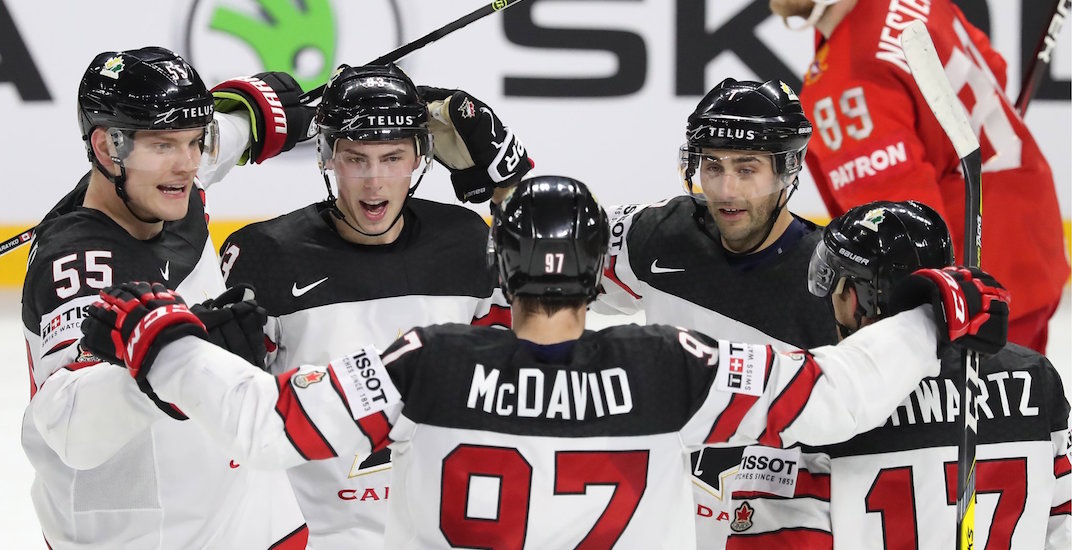 Canada-Russia rarely disappoints, and that was the case again at the IIHF World Championships on Thursday.

An overtime goal by Ryan O’Reilly put his team through to the semi-final, giving Canada a 5-4 win in the quarter-final played in Copenhagen, Denmark.

Connor McDavid made a tremendous play on the game-winner, threading a pass through the defender’s legs on the tape for O’Reilly, who tipped the puck in from in front of the net.

Ryan O'Reilly scores the game winner to send Team 🇨🇦 to the #IIHFWorlds semi-finals, as they defeat Team 🇷🇺 5-4 in OT.#IIHFWorlds 🇨🇦🏒🇷🇺 pic.twitter.com/0FZySJAzW1

“Connor made an unbelievable pass,” O’Reilly told TSN after the game. “I’m amazed at how he got that through. It just hit my stick and went in.”

McDavid was checked closely by the Russians all game, and they successfully held him off the scoresheet at even strength. But they couldn’t do anything about him on the power play. Canada’s captain set up teammates for goals on three occasions with the man advantage, earning the primary assist each time.

Canada was the better team and certainly deserving of the win, but their play in goal was once again a concern. Team Canada is without a bonafide No. 1 goaltender in this tournament, with NHL backups Darcy Kuemper and Curtis McElhinney sharing duties between the pipes. Kuemper did enough to earn the victory, but let in a short-side backhand goal from a bad angle late in the third period that levelled the game 4-4.

Darcy Kuemper allows one of the worst goals of the tournament (which is hard to believe with how bad Canada's goalies have been) off of a weak Artem Anisimov backhander. #IIHFWorlds pic.twitter.com/oPQbO7YkOk

Canada is loaded up front and should be able outscore anyone in the tournament, and that’s what happened against Russia.

The Canadians carried the play in the first period, taking the lead on a power play goal from defenceman Colton Parayko and outshooting Russia 12-4. Ryan Nugent-Hopkins’ power play goal midway through the second period gave Canada a 2-0 lead, but that’s when things got interesting.

.@StLouisBlues defenceman Colton Parayko unleashes a cannon of a shot to give Team 🇨🇦 (@HC_Men) a 1-0 lead over Team 🇷🇺.#IIHFWorlds 🇨🇦🏒🇷🇺 pic.twitter.com/wUlIxKyjF8

Connor McDavid (@cmcdavid97) spots his @EdmontonOilers teammate Ryan Nugent-Hopkins with a seam pass, and @RNH_93 buries it for Team 🇨🇦's second goal of the game.#IIHFWorlds🇨🇦🏒🇷🇺 pic.twitter.com/0jlSIA5yXP

Ilya Mikheyev cut the lead in half 1:02 later, before Alexander Barabanov tied the game up for Russia before the end of the second period.

The third period was a back-and-forth affair. Canada took the lead on two occasions, with goals from Kyle Turris and Pierre-Luc Dubois.

Team 🇨🇦 (@HC_Men) retakes the lead as Jaden Schwartz sets up Kyle Turris for his first of the tournament.#IIHFWorlds 🇨🇦🏒🇷🇺 pic.twitter.com/rhn5AmwSqm

.@BlueJacketsNHL centre Pierre-Luc Dubois regains the lead for Team 🇨🇦 by outmuscling his way to the net, as @HC_Men jumps out in front 4-3 with 7:24 left in the third.#IIHFWorlds🇨🇦🏒 #CBJ pic.twitter.com/S9j7YyixDy

Russia had an answer each time, with goals from Sergei Andronov and Artem Anisimov.

Canada will face the winner of Finland/Switzerland in the semi-final on Saturday. The gold medal game is scheduled for Sunday.