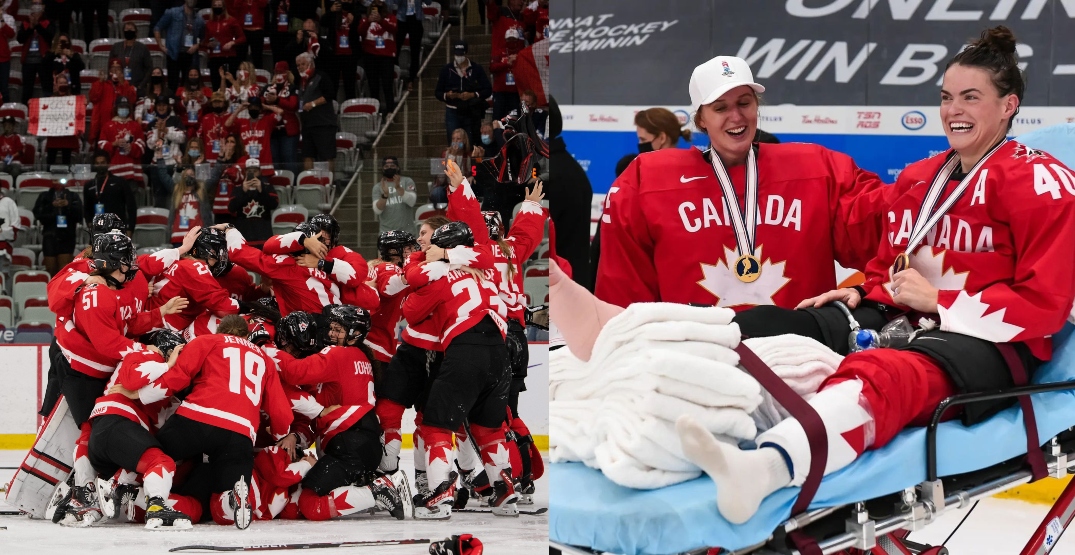 Not even a broken leg could wipe the smile from Blayre Turnbull’s face.

The Team Canada forward accepted her gold medal while lying on a stretcher on Tuesday, following her team’s dramatic win at the Women’s World Hockey Championship in Calgary.

When video replay confirmed that Marie-Philip Poulin scored the winning goal in overtime, Canadian players poured onto the ice to celebrate. Turnbull, who was already on the ice when the buzzer sounded, was the first one to jump into goaltender Ann-Renee Desbiens’ arms, but fell awkwardly.

Turnbull suffered a broken fibula during the celebration, according to TSN’s Meaghen Johnson.

According to sources, Blayre Turnbull suffered a broken fibula during last night’s celebration.

The good news: it’s a clean break and she’s expected to be back skating in 6-8 weeks.

You can see her being dragged away from the pile here:

The 28-year-old Stellarton, Nova Scotia, native was seen mouthing the words “so embarrassing” as she was wheeled back onto the ice on a stretcher to celebrate with her teammates.

Blayre Turnbull got injured in the celebrations, but she made it back out for her gold medal… in a stretcher! 😳😅 #WomensWorlds pic.twitter.com/JUAZUvGiVp

“The smile… says it all,” Turnbull said on Instagram. “I am so proud of our team and unbelievably happy to be able [to] call us World Champions.”

It was one of the most bizarre ways to win a gold medal. She may call it embarrassing, but Canadians absolutely loved the way she handled it.

Just Blayre Turnbull celebrating on a stretcher because she effed up her knee during the celebration. Be more Canadian I dare you. pic.twitter.com/gIjEA6tb3T

Blayre Turnbull on the ice on a stretcher for the gold medal ceremony is a Canadian heritage moment.

Blayre Turnbull, a part of our history pic.twitter.com/HdqOHgzrPi

Blayre Turnbull getting her medal on a stretcher is all of us getting through 2021.

Can't wait until Blayre Turnbull's stretcher ends up in the Hockey Hall of Fame.