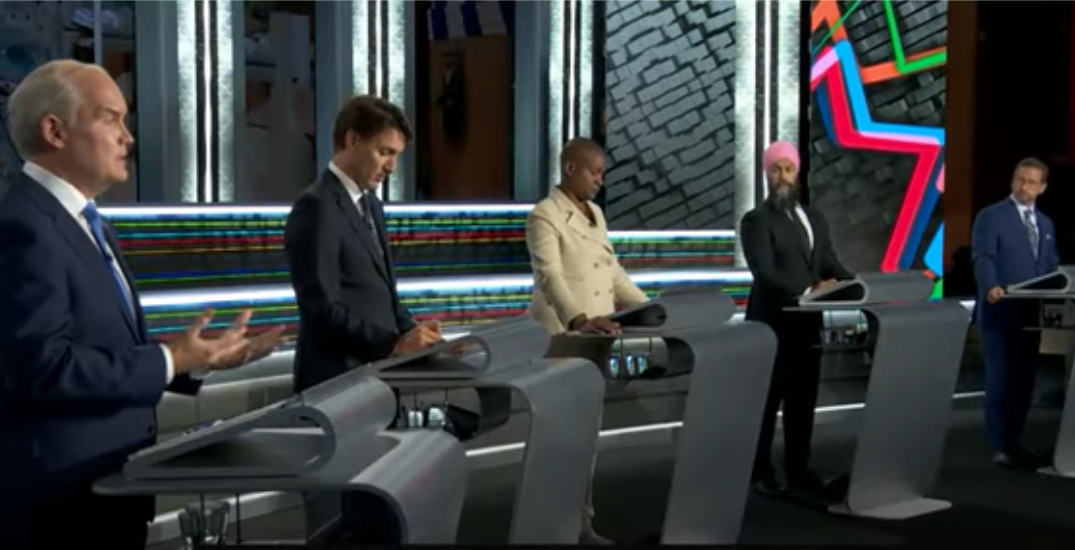 Five federal party leaders are licking their wounds and prepping their zingers after an occasionally testy debate yesterday that came ahead of tonight’s first and only one in English.

The parties sought to stake out positions and attack their opponents in the hours leading up to the leaders’ debate.

The Conservatives highlighted their promise to ban products made with forced and slave labour, specifically calling out China’s treatment of its Uyghur minority while portraying themselves as the best choice for those concerned about human rights abroad.

“For years, we’ve known Uyghur slave labour is being used by China’s Communist regime in the Xinjiang Uyghur Autonomous Region to produce products like cotton, tomatoes, and solar panels for export,” O’Toole said in a statement.

“As prime minister, I won’t hesitate to act against this disgusting practice and ensure that the worst human rights offenders don’t profit from these abuses.”

Singh was scheduled to appear at an Ottawa store for children’s goods on Thursday while several NDP candidates in the Toronto-area were expected to lay out the party’s plan for lifting seniors and people with disabilities out of poverty.

Liberal candidates Chrystia Freeland and Jean-Yves Duclos, who are both cabinet ministers, were set to hold a news conference on Thursday afternoon to attack what they say are planned cuts in the Conservative platform.

This week’s French-and English-language debates come as opinion polls suggest the Liberals and Conservatives are stuck in a tight two-way race, with the NDP and Bloc poised to determine which of the two main parties emerges victorious.

The five themes selected for Thursday night’s debate are: affordability, climate, recovery from the COVID-19 pandemic, leadership and accountability, and reconciliation with Indigenous Peoples.

The topics discussed during Wednesday’s French-language event included health transfers to the provinces, child-care funding, climate, and the COVID-19 pandemic as the politicians sought to sway francophones ahead of the election on September 20.

Much of the back-and-forth Wednesday revolved around health care and how to pay for it. Moderator Patrice Roy pushed the politicians over whether they would hand over the extra $28 billion in annual funding requested by premiers.

The Conservatives said Wednesday, when revealing the costing of their platform, that an O’Toole government would honour the funding deals with provinces for the first year. But after that the Liberal child-care plan would be replaced by the Tories’ promise to convert the existing child-care expense deduction into a refundable tax credit that would cover up to 75% of child-care costs for low-income families.

The spiciest exchange during Wednesday’s debate concerned issues of Quebec identity and representation.

An animated Trudeau turned on Blanchet late in the debate, proclaiming he is also a “proud Quebecer” and that Blanchet does not have a monopoly on the province.

“You keep forgetting: I’m a Quebecer,” Trudeau said, his face flushed, while a small smile slid across Blanchet’s. “I have always been a Quebecer, I will always be a Quebecer.”

“You have no right to consider me not a Quebecer.”

Blanchet conceded to reporters in English after the debate that it was “probably true” that Trudeau was as much a Quebecer as him.

“But in terms of institutions, this is the Assemblee nationale du Quebec which speaks for Quebec,” he said, referring to the French name for the provincial legislature, adding that Quebecers are “obviously not” a monolith.

Paul brought a personal touch to the federal debate—the first for the 11-month Green leader—noting her father’s death in a long-term care home during the pandemic’s second wave. She also said she sees Greens as “allies” to First Nations, citing her own experience as part of a diaspora robbed of its traditional culture.

Singh said he would “completely agree” that Indigenous languages should be recognized as official, going further than other leaders asked on the topic Wednesday.