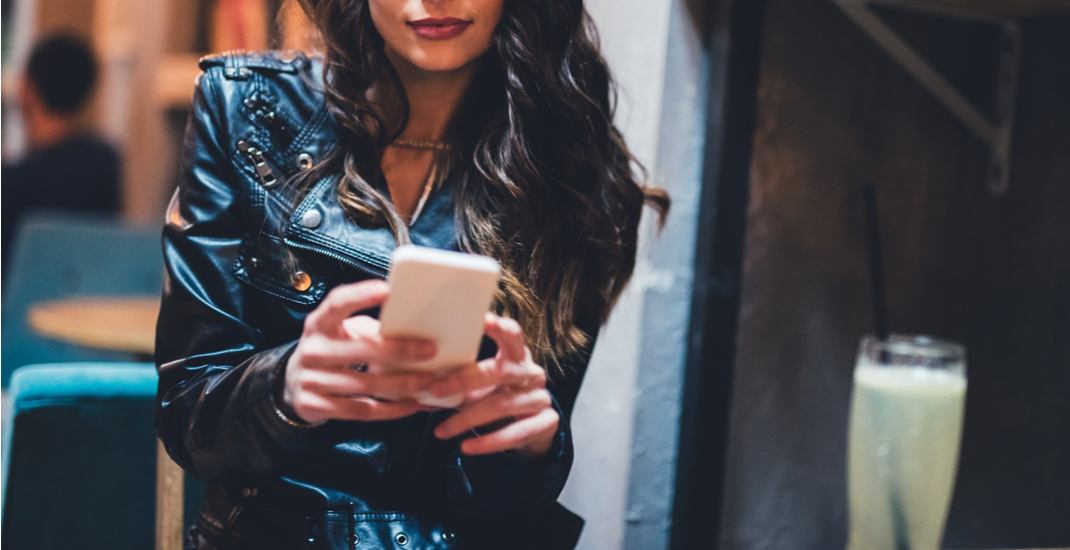 Canada has one of the fastest download speeds in the world.

This is according to a new report from Opensignal, a leader in wireless coverage mapping, which examined the state of mobile networks in 87 countries around the world in five major areas: 4G availability, video experience, download and upload speed experience, and latency experience.

“Opensignal’s latest State of Mobile Network Experience reports provides the benchmark to assess to what extent the real-world 5 G experience will be superior to the existing mobile network experience enjoyed by billions of consumers worldwide,” reads the report.

5G is said to have the potential to be up to 20 Gb/s faster than 4G, making downloading quicker, and streaming load response time livelier.  The push to 5G builds on 4G, using higher radio frequencies that transmit data quicker and with more precision.

5G networks have yet to be implemented in Canada.

When it comes to download speed experience, Canada ranked third after South Korea and Norway.

South Korea was the only country where smartphone users are able to access download speeds over 50 Megabytes per second (Mbps) and Norway was close behind with 48.2 Mbps.

While there is a drop with Canada’s speed, which sits at an average of 42.5 Mbps, Opensignal notes that the country’s third place comes as “little surprise.”

“[Our] most recent report on Canada found our users on all three operators experienced over 35 Mbps in Download Speed Experience, while speeds over 60 Mbps weren’t uncommon in the country’s biggest cities.” 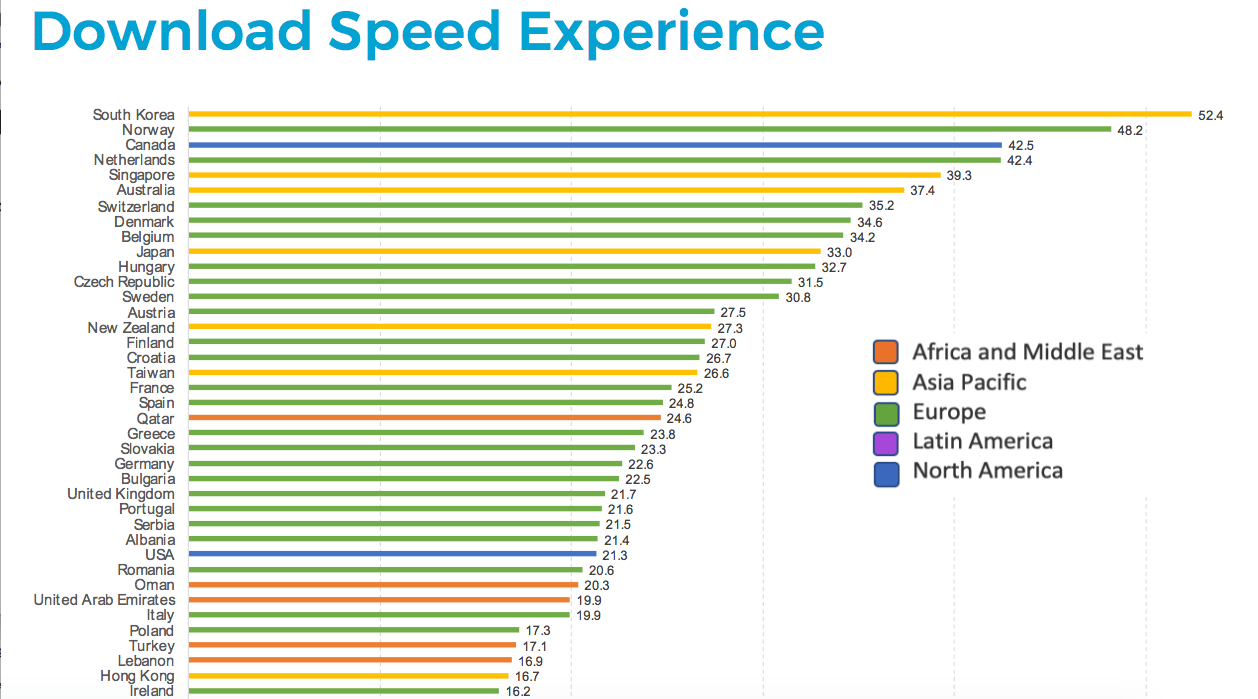 As for upload speed experiences, Canada averages at 10.2 Mbps, which is relatively slower than the fastest countries — Denmark and South Korea — where upload speeds are 15.3 and 15.2 Mbps, respectively.

Opensignal measured upload experience by averaging out the upload speed for each operator on LTE connections as measured by Opensignal users.

“The gap between number 1 (Denmark) and number 10 (Canada) was over 5 Mbps, while below that there were 40 countries within 5 Mbps of Canada’s score.”

Canada was also the only North American country to rank “very good” for video experience, beating out its neighbours down south. This factor quantified the quality of mobile video experienced by Opensignal users on real-world video streams.

Opensignal notes that no country received an “excellent” rating in this section and Canada is one of only six countries outside of Europe to receive this high rating. 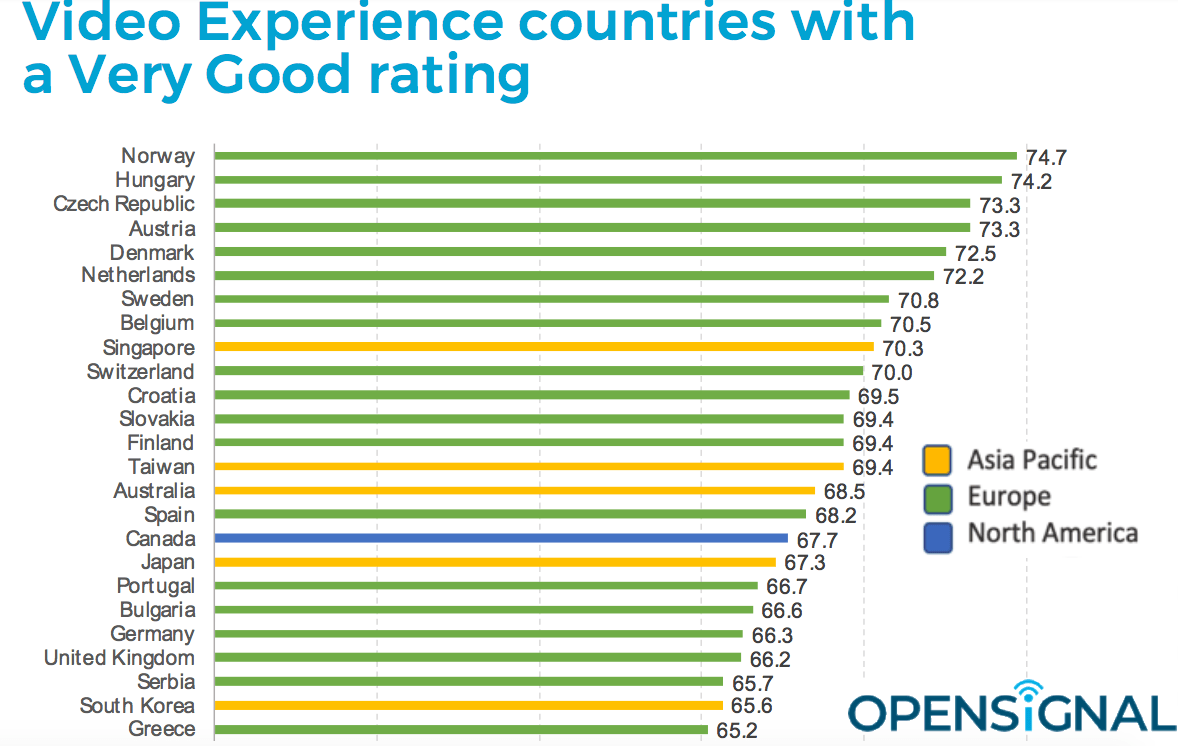 In 4G availability, Canada placed 18th. To determine this, Opensignal measured the proportion of the time its users with a 4G device had a 4G connection. South Korea placed first for 4G availability, followed by Japan, and Norway.

However, 4G availability is not a measure of the coverage or geographic extent of a network.

Latency refers to the amount of data that can be transferred in a period of time and is measured in milliseconds. Opensignal’s analysis of global latency found that only 13 countries scored under 40 milliseconds. Canada did not fall into that bracket as it scored 46 milliseconds, ranking 29th out of the 87 countries. 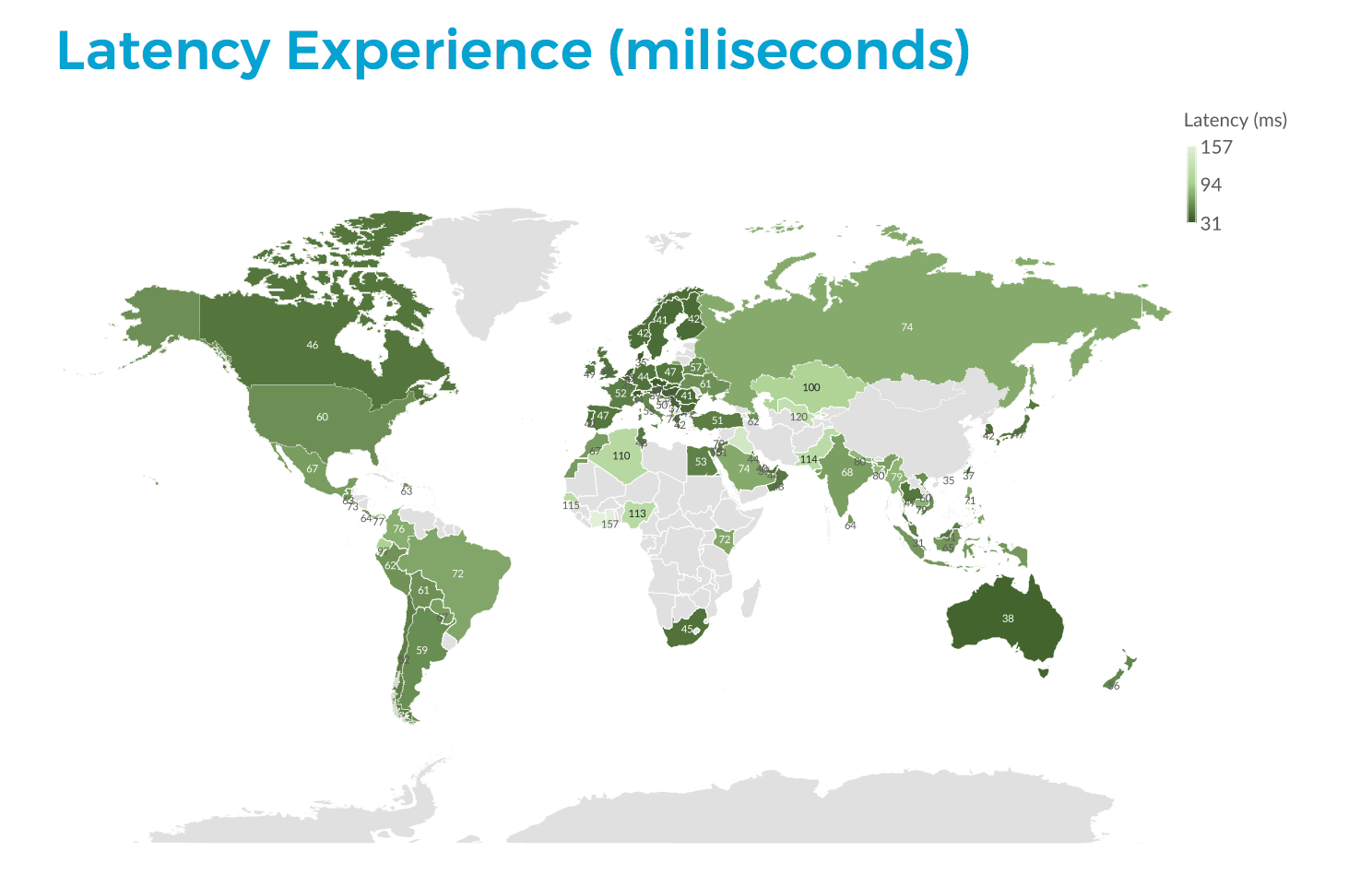 Overall, Canada placed fairly high in all five categories measured by Opensignal but that doesn’t mean it is fully ready for 5G networks.

In a previous interview, Marin Ivezic, cybersecurity and privacy lead at PwC in Toronto, told Daily Hive that Canada is “still behind.”

“We risk being left behind in the next industrial revolution. Considering the size of our market and our telecommunication companies, I don’t see a map that could get us there on time without the government’s involvement,” he said. “We have to make it a national priority.”