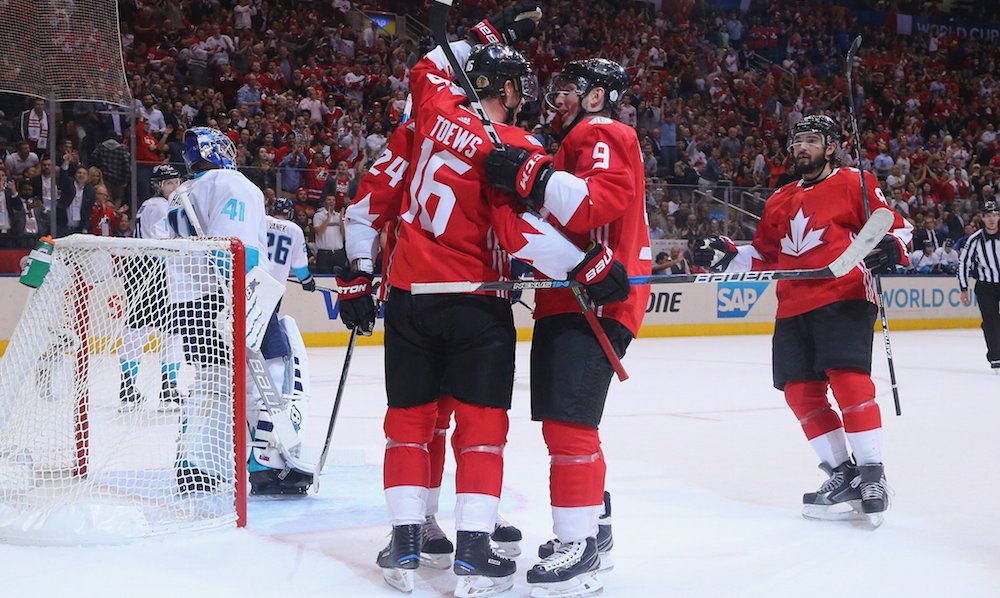 Canada has secured top spot in Group A after defeating Team Europe 4-1 at the World Cup of Hockey on Wednesday.

Once again, Canada made it look easy, scoring early and holding the lead throughout the game. Goals came from Sidney Crosby, Jonathan Toews (2), and Logan Couture. Marian Hossa, who put a puck past his Blackhawks teammate Corey Crawford, was the lone goal scorer for the Europeans.

Canada put 17 shots on Jaroslav Halak, who was phenomenal, in the first period.

Crosby got on the board first, 4:01 into the game, beating Team Europe goaltender Jaroslav Halak to the far post on a wraparound.

Canada was all over Europe in the first period, holding a 17-4 edge in shots. Halak was sensational at times, particularly on a left pad save on Canada’s Brad Marchand.

Unfortunately for Halak, a puck-handling miscue gave way to a back-breaking goal when he gave the puck to Matt Duchene, leading to Toews’ first goal of the game with 55 seconds remaining in the first period.

Up 3-1 with five minutes to play in the third period, there were a number of fans heading to the exits to beat traffic. I’m not mentioning this because I think they’re bad fans, rather, it speaks to the suffocating defence that Canada plays.

“What’s really unique is the willingness to do whatever it takes to win,” said Steven Stamkos after the game. “It really doesn’t matter – I know a lot of people say it, they don’t necessarily mean it – but it really doesn’t matter who gets on the scoresheet, it’s ‘did we get the win at the end of the night.'”

Europe managed to get 20 shots on goal in this game, but 11 of those came in the third when the game was no longer in doubt.

Toews was named first star in the building tonight, not surprising given he scored two goals and one assist.

That’s what Team Canada is all about.

Head coach Mike Babcock was asked to compare his team’s play with that of Team North America, who dazzled fans in the afternoon game.

“I like watching that team because there’s tons of skill,” he said. “I like winning more, though. I just want to win. That’s what our players came for; they came to win. We want to continue to get better. We’ve got another opportunity here. We’re going to have a practice day after a day off. We’ll have a chance to do better. We’ll be ready. I don’t know who we’re going to get, but we’re going to be ready, and it should be fun.”

4. The man responsible for ‘We Dem Boyz’

Can we talk about Canada’s goal song for a minute?

After every goal Canada scores “We Dem Boyz” by Wiz Khalifa gets played, a poor choice in my opinion.

Canada goal. Duchene. We Dem Boyz blasting at the ACC.

I get that everyone’s taste is different and everyone is trying to get the next “Chelsea Dagger” but I don’t think it works well for the moment, even if you like that kind of music.

Each team at the World Cup has their own goal song. Who is responsible for Canada’s?

“That might be Drew Doughty,” he said. “It’s got a good ring to it, it sounds good when we score.”

But Steven, it’s getting annoying…

“Good. I hope it gets more annoying.”

The best one? Team Russia:

Canada will play the second place team from Group B in the semi-final on Saturday (4 pm PT / 7 pm ET). That team will be either be arch rival Russia or the most exciting team of the tournament, North America.

Canada will play Russia if the Russians win their game against Finland on Thursday. If Finland wins, then continental bragging rights will be on the line (is that a thing?), with Canada playing North America.

The other semi-final will be between Sweden and Europe.

6. Can anyone beat them?

Canada is making winning look easy, and they’re doing it in second gear.

But the semi-final is the danger game for this team. Russia and North America have a lot of fire power, and whoever Canada gets could put some pucks past Carey Price. Couple that with some inspired play, an overconfident favourite, and some great goaltending, and who knows?

It’ll be interesting to see what kind of energy they come out with.