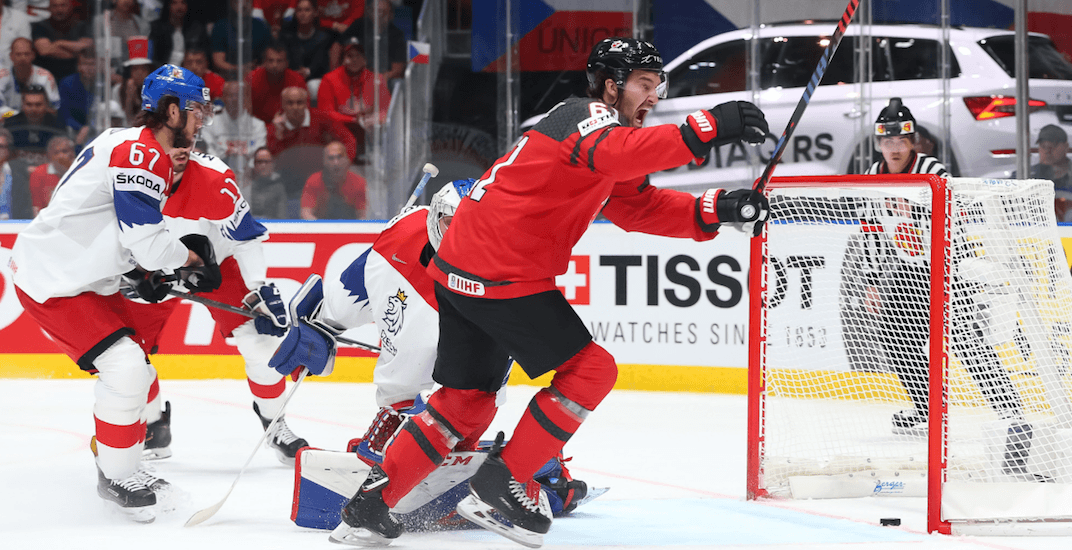 After being 0.4 seconds away from being upset by Switzerland in the quarter-finals, Canada will play for gold at the IIHF World Championships.

Canada cruised past the Czech Republic 5-1 in the semi-finals on Saturday, and will now play Finland in the gold medal game on Sunday.

Vegas Golden Knights forward Mark Stone opened the scoring in the first period for Canada, deflecting a pass from Vancouver Canucks defenceman Troy Stecher past Patrik Bartosak to make it 1-0 just over five minutes into the game.

Mark Stone opens up the scoring for Canada 🇨🇦 with his tournament leading 8th goal against the Czech Republic 🇨🇿 in their semifinal matchup. #IIHFWorlds pic.twitter.com/ETDW8ur4kN

It was the seventh straight game in which Stone registered a point, who leads all Canadian players with 14 points in the tournament.

Canada doubled their lead just seconds into the middle frame when Edmonton Oilers defenceman Darnell Nurse banked a shot off Bartosak from behind the goal line.

🇨🇦 SCORES!@HC_Men's Darnell Nurse (@EdmontonOilers) finds the back of the net 10 seconds into the second period!

It quickly became a 3-0 game after a pretty passing play was finished off by Pierre-Luc Dubois, and Canada went into cruise control.

Third period goals by Kyle Turris and Thomas Chabot made it 5-0, but the Czechs broke the shutout with six minutes remaining when Tomas Zohorna got in alone and ripped a shot over the glove of Matt Murray.

The game may have been closer if not for the stellar play of Murray in goal. Canada was outshot 41-30 but the Pittsburgh Penguins netminder made 40 saves, including 16 in the third period and was named Player of the Game for Canada.

.@mattmurray_30 makes 40 saves on his birthday to get @HC_Men to the gold medal game!

Canada’s top three players of the tournament were revealed after the game, with Stone, Murray, and Anthony Mantha receiving the honours.

Canada will now play for the gold medal against Finland, who upset Russia 1-0 in the earlier semi-final game on Saturday.

Finland beat Canada 3-1 in the opening game of the tournament back on May 10, the only loss for Canada in the entire tournament.