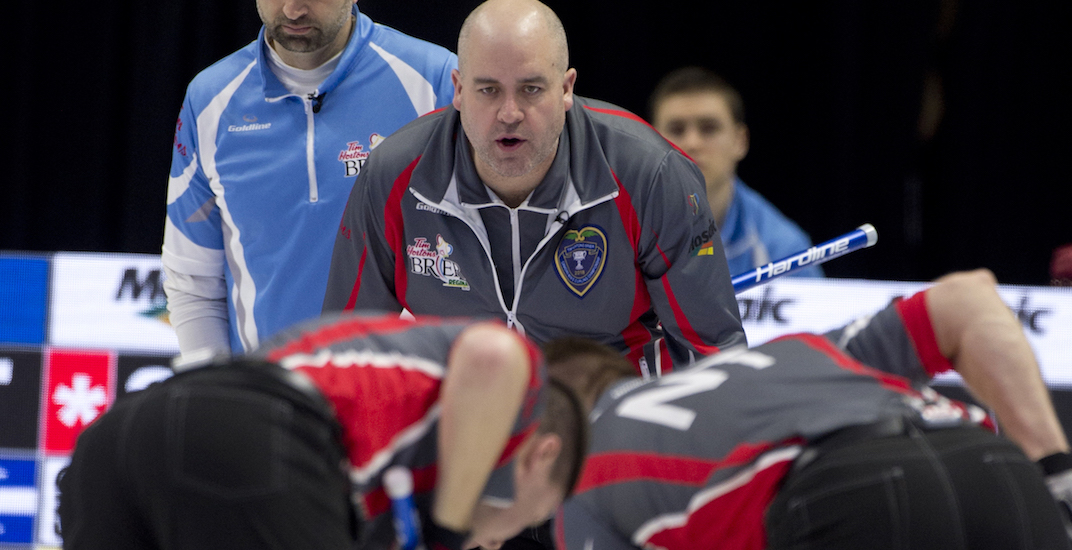 How much beer do you have to drink to get kicked out of a curling event?

Drinking and this Canadian pastime go hand in hand, even at high levels of the sport. But, as four professionals learned recently, even curling has limits.

The team of Jamie Koe, Ryan Fry, Chris Schille, and DJ Kidby found that out the hard way at a World Curling Tour in Red Deer this weekend.

The team of Jamie Koe, Ryan Fry, Chris Schille and DJ Kidby has been ejected from the Red Deer Curling Classic due to unsportsmanlike behaviour, forfeiting their remaining game. #curling #wcthttps://t.co/DmrezFmzwq

The four Canadian curlers were booted from the $35,000 Red Deer Curling Classic due to “unsportsmanlike behaviour,” the World Curling Tour wrote in a Sunday afternoon tweet. Some pre-match drinking appeared to have gotten out of hand, affecting their behaviour on the ice.

“They went out to curl and they were extremely drunk and breaking brooms and swearing and just unacceptable behaviour that nobody wants to watch or hear or listen to and it was just, enough was enough,” Red Deer Curling Centre facility manager Wade Thurber told the CBC.

All four players have expressed remorse and have since issued public apologies.

“On behalf of my team, I would like to apologize to everyone involved in the 2018 Red Deer Curling Classic,” Koe said in a message posted to Twitter. “Due to a lapse in judgement on Saturday, we contributed to an unpleasant experience for others. Although I removed myself from the last game before it started, the actions from the team led to our disqualification.

“We were respectful and the committee was right to disqualify us from further play, which we did not argue. I would like to sincerely apologize to the athletes, fans, and organizers at the event. I will be taking steps to ensure this never happens again.”

I would also like to thank everyone for all the messages of support during this time. For those that know me as a person and how I conduct myself. I truly am blessed with so many amazing people in my life.

The team’s skip, Koe represents the Northwest Territories and has participated in 12 Briers. The 41-year-old is also the younger brother of Kevin Koe, who represented Canada at the Winter Olympics in February.

“We took our fun a little too far which led to curlers and fans being uncomfortable and upset,” said Schille, adding that he has apologized to their opponents, arena staff, and board members.

I want to express how sorry I am to everyone affected by my actions on Saturday. I never meant to offend anyone but that’s the result of a poor decision – I have to live with the consequences and will be taking every step needed to guarantee this never happens again. #notgivingup pic.twitter.com/3gnjkDam1W

“We entered the event to compete and have fun at the same time and things got taken way too far,” Kidby added. “Sorry to all the competitors, spectators, and everyone else who had to witness the display on Saturday.”