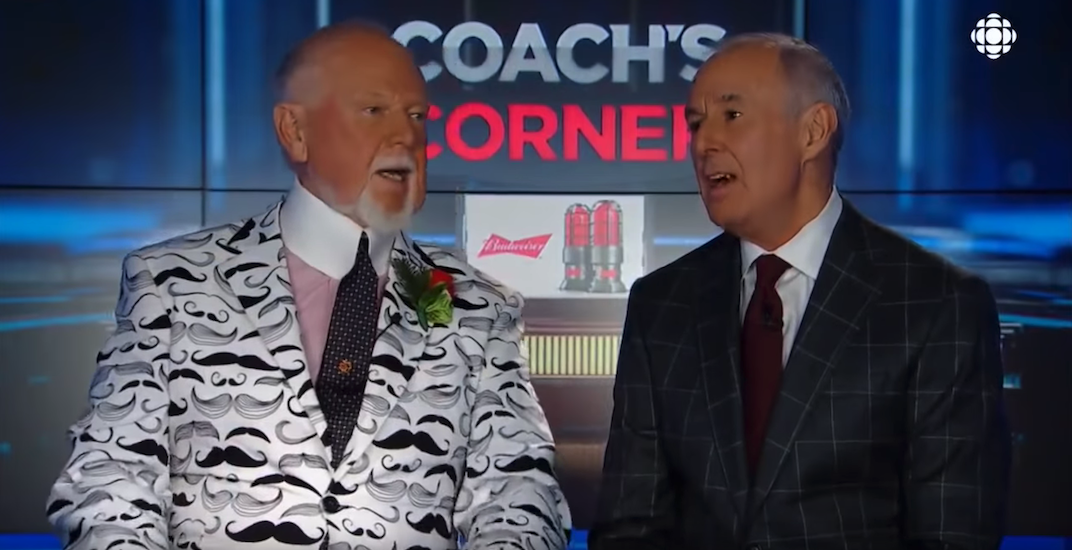 The Vancouver Canucks had the national spotlight on them on Saturday, as their game against the Montreal Canadiens was featured on the early game on Hockey night in Canada.

It was a rare opportunity for the Canucks, whose game began at 4 pm in Vancouver to accommodate the Canadian national television audience.

The Toronto Maple Leafs had the night off entirely, ensuring that the Canucks would be the focus of Coaches Corner during the first intermission.

Don Cherry and Ron MacLean tackled a number of subjects, including a feature on 1970s Canucks goalie Gary “Suitcase” Smith, the shot-blocking prowess of Erik Gudbranson, and making a leap in logic to suggest that Elias Pettersson was uncomfortable watching a fight.

You know, the usual stuff we’ve come to expect from an 84-year-old hockey pundit.

The nine-minute show began as a fashion segment, with Cherry narrating as players arrived to Rogers Arena in their best suits.

This is also a Cherry staple, who loves hockey’s tradition of wearing suits to games at all levels of the sport.

It was a fun way to start the weekly segment, though you couldn’t help but notice how many names Cherry got wrong.

“Goldinin, I don’t know how to pronounce that name. Pretty good!”

Hey, at least he admitted that one.

Check out the video, beginning at the 30-second mark:

Now, Cherry’s been famously getting names wrong forever. It’s part of his schtick.

At least I think it is.

He famously mispronounces Hall of Fame goaltender Patrick Roy’s name wrong, and fans in Vancouver remember him glowing about Kevin “Bieska” on a number of occasions.

Still, it’s particularly jarring when he gets so many names wrong in quick succession. He got three of the first five Canucks player names wrong, and later referred to Antoine Roussel as “Russell.”