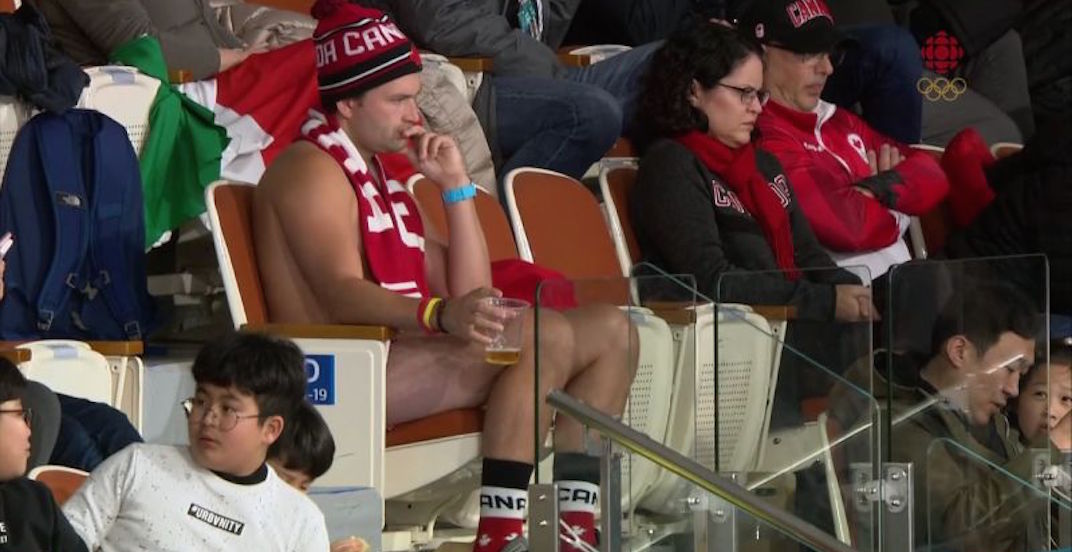 And we thought Rachel Homan’s husband was the most dedicated curling fan in PyeongChang.

An image of a Canadian curling fan at the Winter Olympics has gone viral. And for good reason.

Without a shirt or pants, as is customary on planet Earth, he seems to be enjoying a curling match by himself with a beer in hand.

We just can't compete with the Canadians at the Winter Olympics. We just can't do it. pic.twitter.com/aN5t4DaQYe

While he doesn’t have the body of the Tongan flag bearer, he has the same spirit. Olympic curling is taking place in the coastal city of Gangneung, where temperatures have hovered around the freezing mark.

I guess that’s why he wore a tuque and scarf.

Understandably, he has the admiration of everyone.

You can’t see it, but because Canadians are polite, he has a put a towel down on the seat so he doesn’t get ball-sweat into the cushion ..

When you only have really warm weather six months of the year, you get the naked time in when you can. Ohhhhhhhh Canada!

It's always nice when the folks from Thunder Bay show up.

He forgot his mittens!🧤🧤

The key here is his beer cup is almost empty

You lose all your heat through your head, so he’s good

Now, if you’re like me and were wondering if he was actually wearing shorts of some kind – turns out the answer is (thankfully) YES.

A Canada's fan arrives undressed at the #Pyeonchang2018 Curling Center for the men's round robin session between the US and Canada.