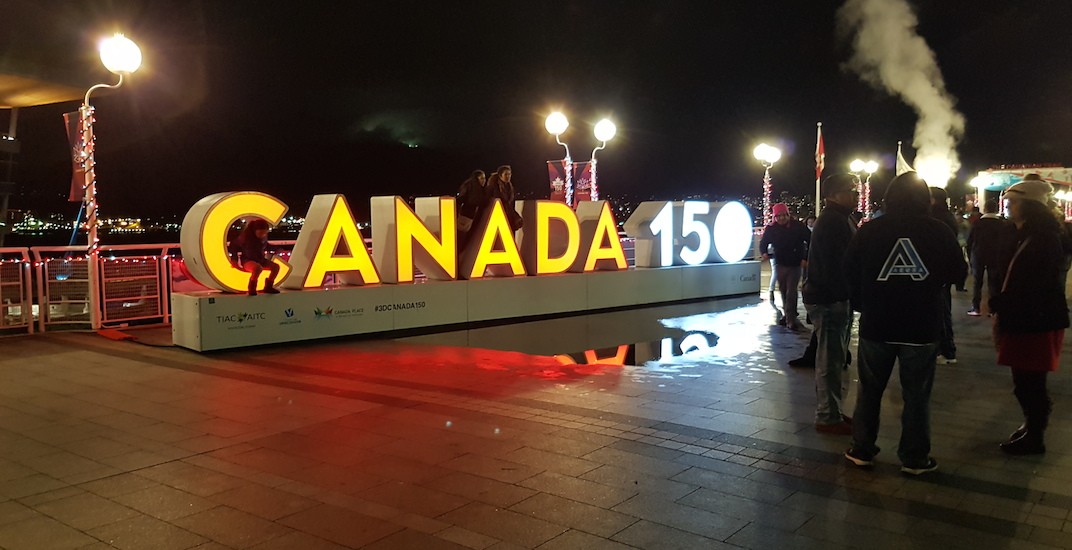 The big three-dimensional ‘CANADA 150’ sign at the plaza entrance of Canada Place is still kicking after it was first installed in June in time for this year’s super-sized Canada Day celebrations to celebrate the country’s 150th anniversary.

And given its continued immense success as a photo opportunity attraction, even five months later in November, its stay at Canada Place has been extended.

On social media, it has quickly become one of Vancouver’s most photographed landmarks.

Today I had to say goodbye a good friend from brazil who taught me fancy’s words jajaja, he was my best friend in Vancouver and now he come back to his hometown, i wish you good luck dude ! ! See you Wladimir ! !

In an emailed statement to Daily Hive, the Port of Vancouver says the sign will remain in place until January 15, 2018 – through the Christmas season and New Year’s Eve celebrations. Originally, the stated plan was to dismantle the sign this month.

The sign is 6 ft high, 36 ft long, and weighs 6,000 lbs. It is one of 19 identical signs across the country funded by the Tourism Industry Association of Canada (TIAC) and the federal government.

“We are thrilled that this sign has been so popular for residents and visitors alike. We are honoured that TIAC selected our facility as their Vancouver installation,” reads the statement.

When Daily Hive asked whether there was any interest from the Port to replace the Canada 150 sign with a permanent sign, perhaps a sign that reads ‘VANCOUVER’, the Port said: “At this time we do not have a plan to install a permanent sign at Canada Place, but it may be something we consider in the future.”

A permanent ‘VANCOUVER’ sign was something Daily Hive suggested in an opinion piece earlier this year, and it was a well-received idea with our readers, with 89% of over 1,700 online poll respondents in favour of the idea.

We suggested a sign at Jack Poole Plaza, but the Canada Place plaza entrance location is also an ideal and proven spot with its framed backdrop featuring the Vancouver Convention Centre West building, Burrard Inlet, and mountains.

The location is, of course, also a major hotspot for visitors, with crowds from the tour bus pick-up and drop-off area, events held at the convention centre, and cruise ship passengers.

Till next time Vancouver ♥️