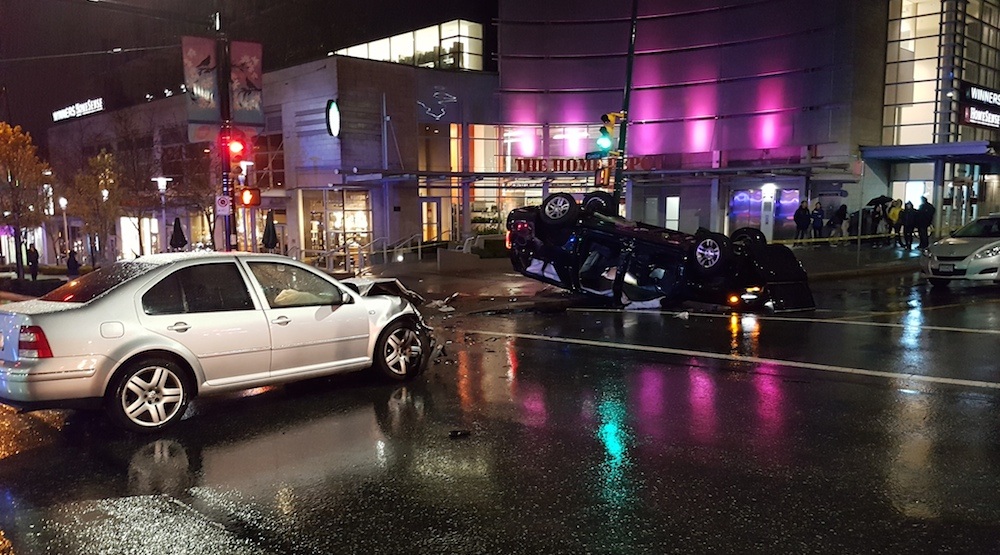 The SUV involved in the collision flipped over onto the sidewalk. (Kenneth Chan / Daily Hive)

Three vehicles were involved in a serious crash near the southern end of the Cambie Street Bridge on Saturday evening.

The collision occurred at approximately 9:30 pm at the intersection of Cambie Street and West 8th Avenue, with two vehicles sustaining major damage.

Constable Jason Doucette told Daily Hive that a black SUV on the southbound direction of Cambie Street was making a left turn eastbound onto West 8th Avenue when it was struck at the intersection by a northbound silver Jetta.

The impact caused the SUV to flip over onto its roof, slide into a Toyota Matrix waiting to go westbound on West 8th Avenue, and onto the sidewalk just outside of the entrance into Home Depot.

The northbound direction of Cambie Street from West Broadway to West 7th Avenue was closed to all traffic until the early morning hours of Sunday.

It is believed the incident was related to poor visibility; alcohol was not a factor.

However, just hours later during the early morning hours of Sunday, first responders were also called to the scene of another collision in East Vancouver. One man in his early 20s succumbed at the scene of the crash.