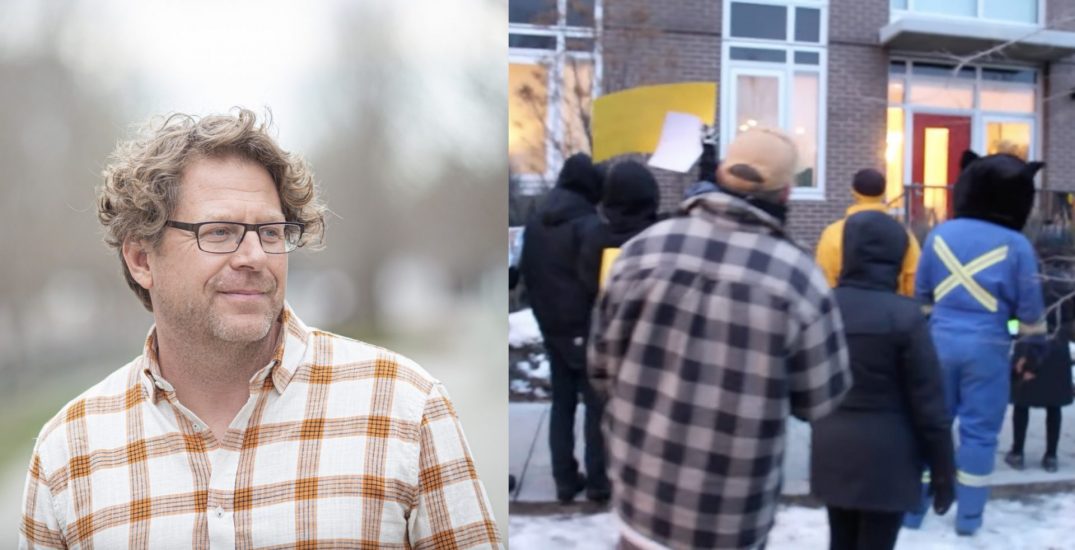 Just days after protesting at the Calgary mayor’s house, a group that calls themselves Calgary Freedom Central targeted the home of another politician.

Calgary Freedom Central, which describes themselves as a “community news page providing rally info and coverage of the freedom movement in Alberta,” posted a video on their Facebook page that shows a number of people gathered outside of Ward 9 Councillor Gian-Carlo Carra’s condo. The group is holding signs and chanting “Tear down the fence,” and “Hey! Carra! Leave our kids alone.”

Calgary Freedom Central writes on Facebook that Carra is “the driving force behind the closure of Inglewood’s Without Papers Pizza, for not complying with medical apartheid, and he recently ordered fencing around the parking lot where the restaurant owner has been holding rallies against the mandate every Thursday.”

The post says that Carra was spotted “hiding in his condo hallway during the protest, presumably on the phone with police,” while Calgary city council was in a late day meeting.

Calgary Freedom Central notes that the protesters departed before any police arrived.

Calgary Freedom Central says that this is the third politician’s house that Calgarians have protested at since the beginning of 2022.

On Monday evening, Gondek also offered comments about the event on Twitter, saying, “One small event does not define us.”

Stand strong together, for one small event does not define us. We have the ability to denounce hate & celebrate all that is good. There is much heavy work to do & we must be steadfast.

I remain honoured to serve this city.

Calgary Freedom Central said on Facebook on Monday that they plan to continue protesting outside of politicians’ homes.

“It has become very clear to us that after nearly two years, none of these politicians are willing to listen to the voices of the people they supposedly represent,” the group wrote.

“We expect to continue protesting outside their homes until all vaccine and mask mandates and restrictions are removed and an open dialogue is started with the public,” continues the post.