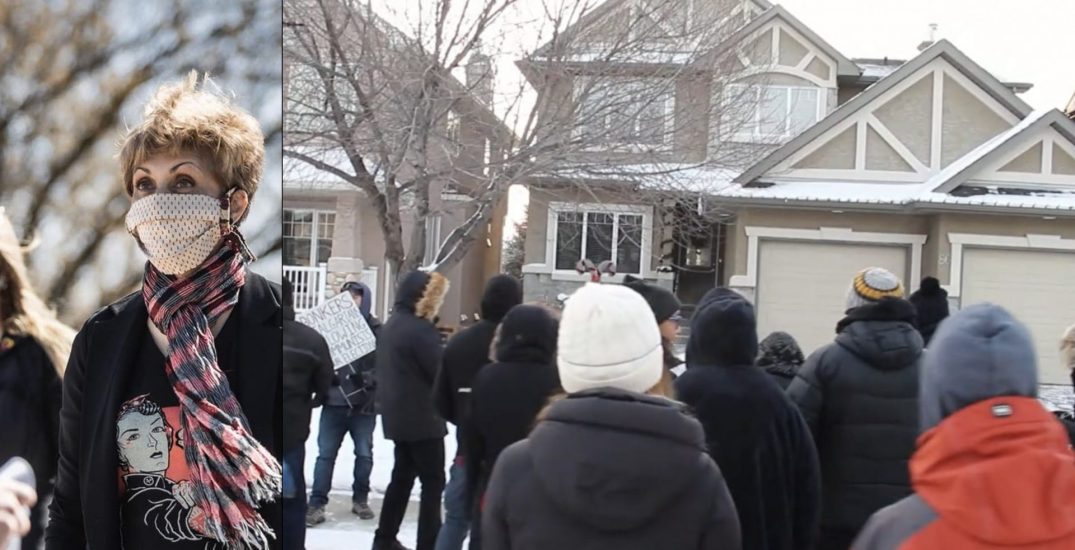 Calgary mayor Jyoti Gondek has responded after a group of protesters gathered outside of her home on Sunday, many chanting, “Freedom over fear” and “Fake mayor.”

Videos of the protest were shared across social media and captured dozens of people holding signs and shouting in the direction of Gondek’s house from the street and sidewalk.

Anti-vaxx protestors showed up in front the house of Calgary mayor @JyotiGondek today, with the post on Calgary Freedom Central saying that police did not show up while they were there smh#antivaxxers pic.twitter.com/oPVIj7oKBk

On Monday evening, Gondek offered comments about the protest on Twitter, saying, “One small event does not define us.”

“There is much heavy work to do & we must be steadfast,” Gondek wrote, adding that she remains honoured to serve the city.

Stand strong together, for one small event does not define us. We have the ability to denounce hate & celebrate all that is good. There is much heavy work to do & we must be steadfast.

I remain honoured to serve this city.

Calgary Freedom Central, which describes itself as a “community news page providing rally info and coverage of the freedom movement in Alberta,” wrote on Facebook on Monday that they plan to continue protesting outside of politicians’ homes.

“It has become very clear to us that after nearly two years, none of these politicians are willing to listen to the voices of the people they supposedly represent,” says Calgary Freedom Central on Facebook.

“We expect to continue protesting outside their homes until all vaccine and mask mandates and restrictions are removed and an open dialogue is started with the public,” continues the post.

The group writes that, for over a year and a half, they have been protesting “the government’s excessive overreach into our lives and businesses on the premise of a public health emergency.”

Calgary Freedom Central says that they have held in excess of a hundred protests around the city and have sent thousands of emails to MLAs and city councillors to express their concerns about public health measures and restrictions.

“Not once has any politician seriously considered any public input on these policies that have dramatically affected the well-being and livelihoods of millions of Albertans,” reads the Facebook post.

Calgary Freedom Central says that they would welcome “an open conversation with politicians that allows for the voices of the public and uncensored medical professionals to be heard.”