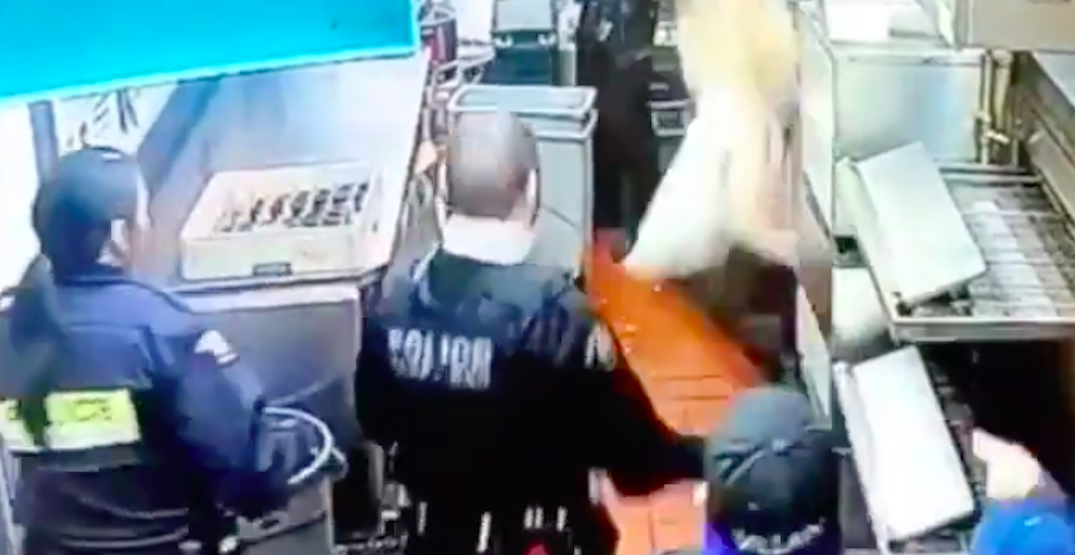 A would-be dine-and-dasher’s attempt to flee a Burnaby restaurant was thwarted in a somewhat unusual way.

According to Burnaby RCMP, the female culprit tried to escape the restaurant by crawling into the ceiling of the establishment from the women’s washroom.

However, she didn’t manage to make it very far before she fell through the ceiling and landed in the restaurant’s kitchen – right in front of police officers.

Burnaby RCMP told Daily Hive police were called to the scene when “the manager of a restaurant in the Metrotown area called to report a woman had been seen crawling into the ceiling vent through the women’s washroom in an attempt to avoid paying her bill,” RCMP said.

Police arrived shortly thereafter and were directed to an area of the kitchen “where the women could be heard crawling above the ceiling tiles.”

Then, “almost immediately, the woman fell through the tiles and was taken into custody.”

This dine and dasher just dropped!⬇️ Trying to skip out on the restaurant bill, she crawled above the kitchen cieling from the washroom. Luckily she wasn’t hurt when she fell through the cieling tiles and landed right in front of our #BurnabyFrontline officers! #Gravity #Foundyou pic.twitter.com/eJYC1jIod3

After a self-examination “and with assistance from officers and restaurant staff, the woman was deemed uninjured and did not require further medical attention,” police said.

And “after discussions with management and taking into consideration her life circumstance and struggles, other measures were taken and no criminal charges were pursued.”

Still, police said the incident “could have ended much worse.”

Regardless of one’s situation in life, nobody “should risk their own health and wellbeing in an attempt to evade payment, apprehension or repercussion.”

The Burnaby RCMP officers who responded, “in consultation with the restaurant management, showed compassion and understanding while emphasizing personal responsibility and life change.”

Thankfully, police said, “this situation ended without injury and lessons were learned by all.”

And while the video was just posted this week, Burnaby RCMP said the incident actually took place in March of this year.

As for the timing around sharing the video, police said that over the past couple of months, they “have been telling our Burnaby Frontline stories in an effort to give the public a look at the incidents our officers respond to everyday. We felt this was a good example of some of the more interesting files our officers respond to.”