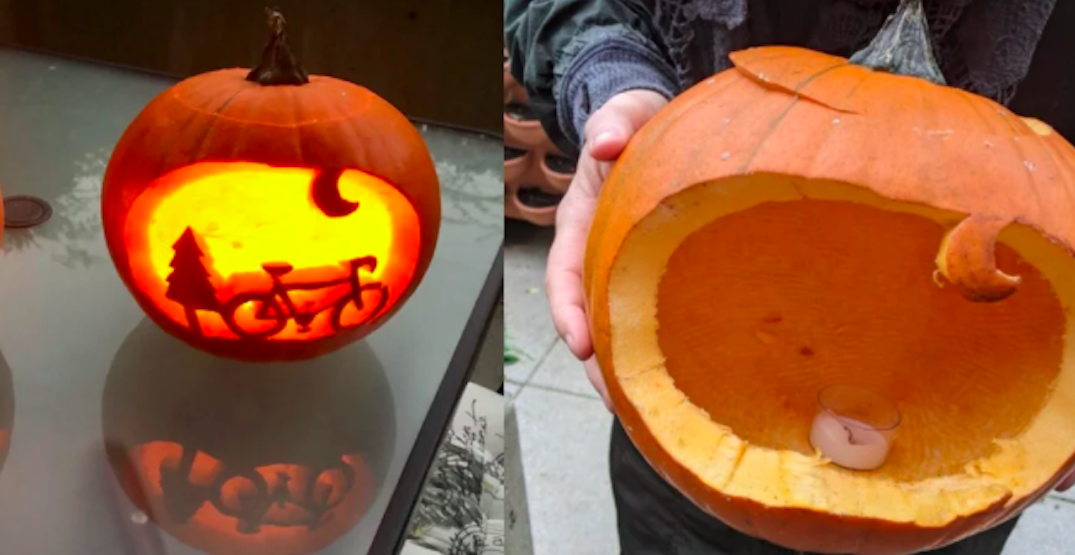 A Vancouver resident who recently had their bike stolen was also the victim of another related theft – this time in the form of a pumpkin carving.

According to Kristy Gardner, the original bike theft took place outside a Commercial Drive business, where her partner had locked up his bike, before returning to find the lock had been cut, and his bike had been stolen.

She told Daily Hive her fiancé went “all over town” looking for it.

“We were devastated,” she said of the theft. “It’s his source of transportation and pleasure. He’d planned to do a cycling challenge the following week. It was like a part of him.”

Making matters worse was the fact that her fiancé had lost his job due to the pandemic, and was working as an Uber food bike delivery person to help make ends meet. As such, the theft also meant a loss of income. Gardner said he posted about the theft on Reddit, and “someone actually stepped up and gave him a $2,200 bike” to replace his stolen one.

“It was so generous and thoughtful,” she added.

With both Gardner and her fiancé now in the possession of a bike, the pair decided this week to ride from Vancouver out to Laity Pumpkin Patch in Maple Ridge – “in the middle of a thunderstorm that was not in the forecast” – to pick out their Halloween pumpkins.

“We then rode back with them, for a total of close to 100 kms on our bikes that day,” she said.

Once they had carved their pumpkins, Gardner and her fiancé decided to place them on their private patio, off the back of their condo building, located just off Commercial Drive.

“The area is actually gated and locked, and we’re at the far end of the building, so there isn’t a lot of foot traffic near us,” she explained. “Therefore, whoever took the pumpkin bike was either a neighbour living very close to us or someone who didn’t belong in the compound and was looking for who-knows-what.”

Adding to the situation she said, “the three bike rooms in our building were broken into only a few days later and someone stole a lot of bikes from the residents in the building. It was like a kick in the teeth.”

As for the bike that had been carved into the pumpkin, Gardner said her fiancé’s “face fell” when they made the discovery.

Then, she said, “we started to laugh. It’s pretty ridiculous and insane. My pumpkin wasn’t touched, and the moon is still attached to his. Someone clearly wanted the bike.””

She quipped that bike thieves in the city “must be running out of real bikes to steal.”

And even if the thief was trying to be funny, “it goes to show the level of bike theft in Vancouver right now.”

The fact that someone “can high-jack a pumpkin bike and everyone understands it — [shows] something needs to be done.”

And “just because a bike isn’t worth as much as a vehicle, there must be a way to better protect bike owners who rely on that mode of transportation and exercise.”

Gardner said she’s heard from people who “have told me they’re simply not buying bikes anymore because the risk is too high; they can’t afford to continue to replace them.”

This, she said, is both sad for them, and for a city trying to be the “greenest.”

Ultimately, when it comes to the issues of (real) bike thefts in Vancouver, “I’m disappointed our city isn’t doing more about this.”