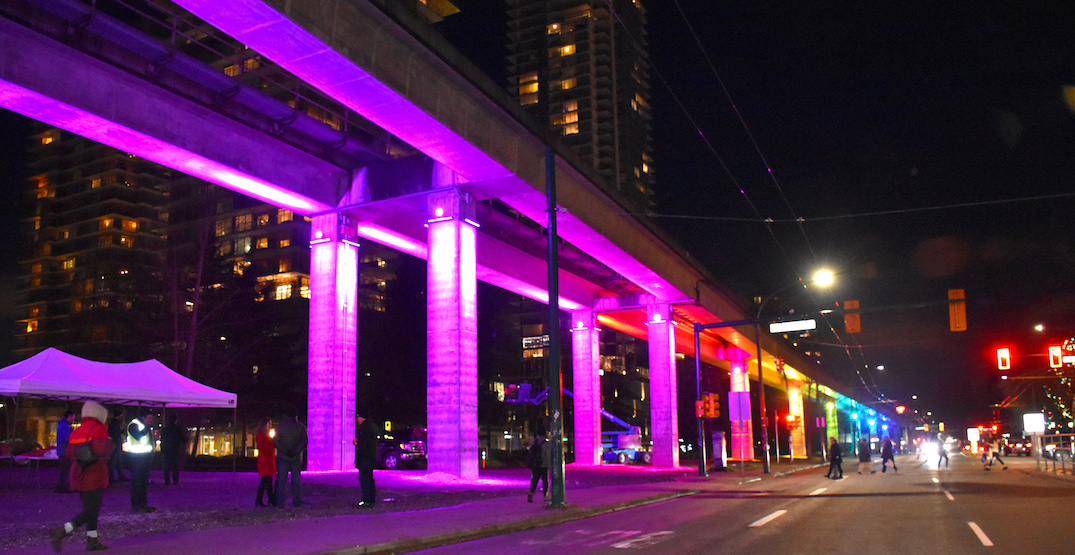 Just in time for Christmas, the City of Burnaby has turned on the newly installed first section of bright and colourful accent lighting for the pillars and underside of the SkyTrain Expo Line elevated guideway within its Metrotown Downtown area.

This is a new permanent lighting feature to not only aesthetically illuminate the columns, but to visually improve the public spaces beneath the elevated tracks, and to improve the safety and visibility of the BC Parkway walking and cycling pathway that follows the Expo Line guideway in Burnaby.

The entire special lighting project will be installed in phases, spanning a total distance of about five km from Patterson Station to Edmonds Station. When fully complete by early 2023, a total of 178 guideway pillars will feature the new lighting.

We now have a rainbow railway! 🌈@CityofBurnaby has installed the first segment of programmable LED lighting on #SkyTrain in Metrotown.

By early 2023, 5 km of the Expo Line from Patterson to Edmonds stations will be fully illuminated. #vanpolihttps://t.co/yipZY9CjMh pic.twitter.com/CC0iTtlyq1 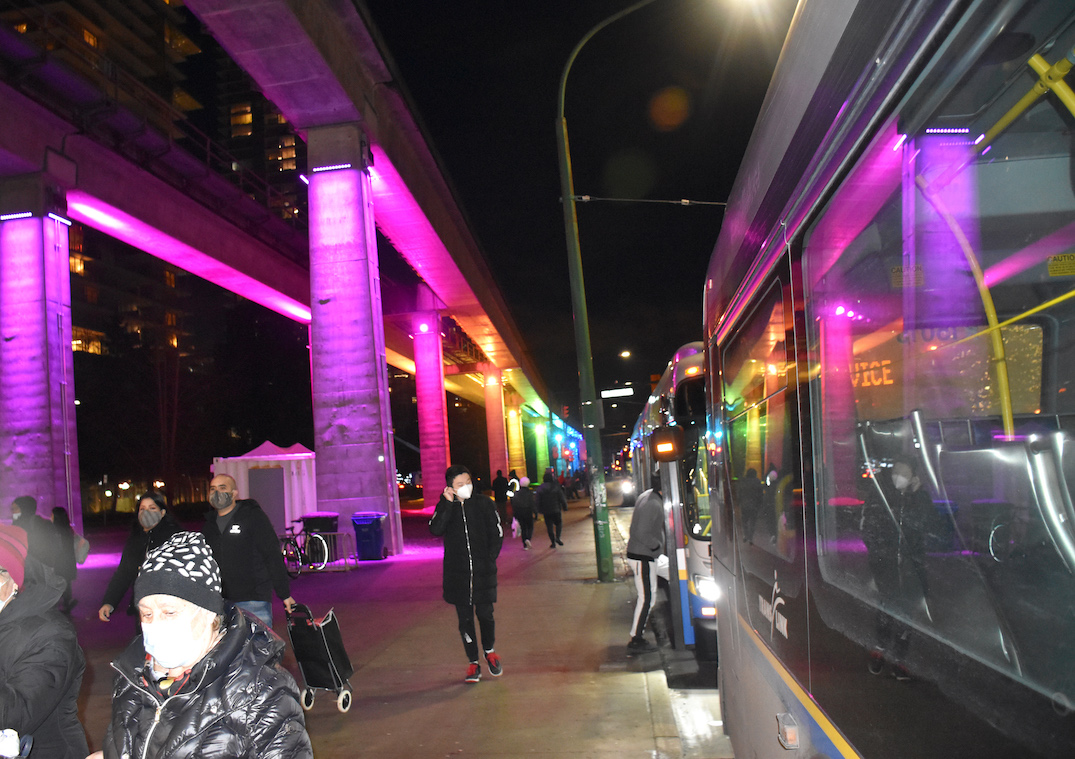 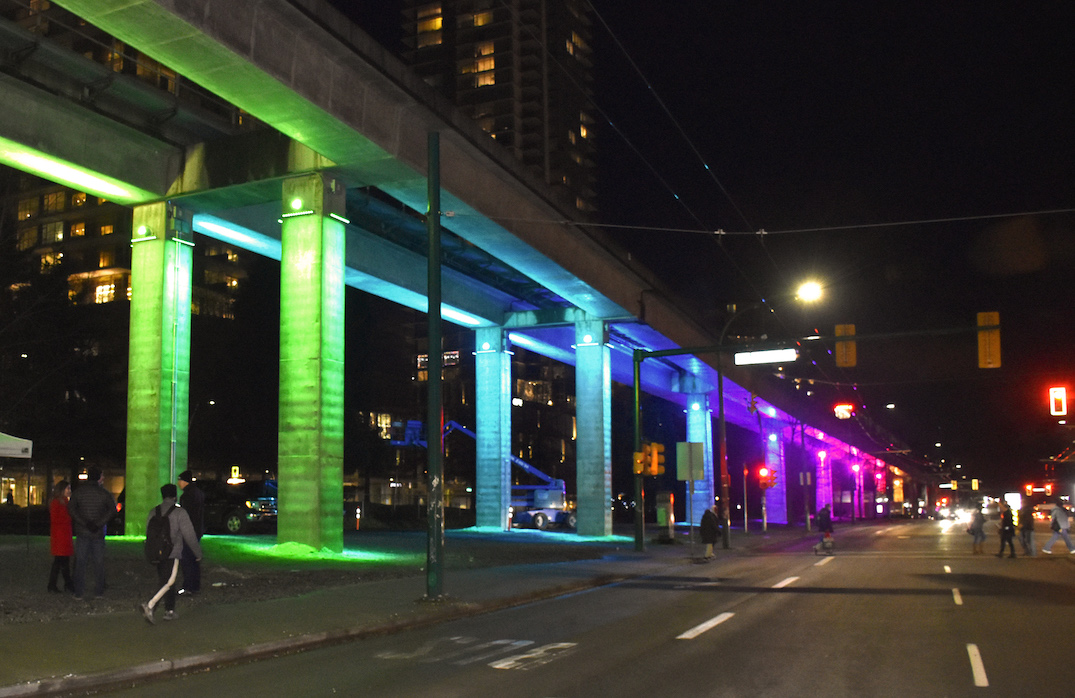 “BC Parkway is such a vital space in Burnaby and we want to build on that,” said Burnaby mayor Mike Hurley in a statement.

“People use the path to get to work, to shop and to explore our city. By adding new lighting and exploring other projects with our partners, we hope to see BC Parkway become a beautiful, green and even more active corridor in our region — both day and night.” 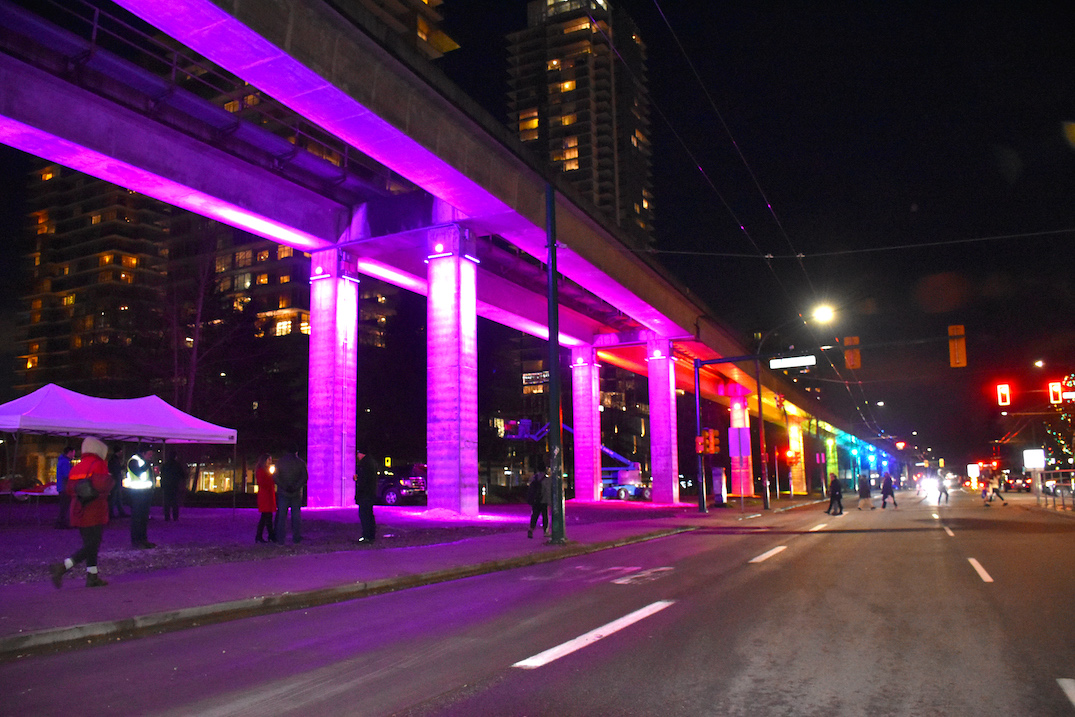 In October 2021, Burnaby City Council approved a $3.45-million contract to Bill Hill Contracting for the first phase of special lighting work between Patterson Station and Metrotown Station. Under the contract, their work fully covers all aspects of the project, including designing, engineering, supplying, and installation.

The municipal government has set aside a total budget of up to $9.8 million for the combined costs of all phases.

Several other cities have also installed special lighting for their SkyTrain pillars, namely Coquitlam on the Millennium Line Evergreen Extension along North Road and Pinetree Way, and Richmond on the Canada Line along No. 3 Road.