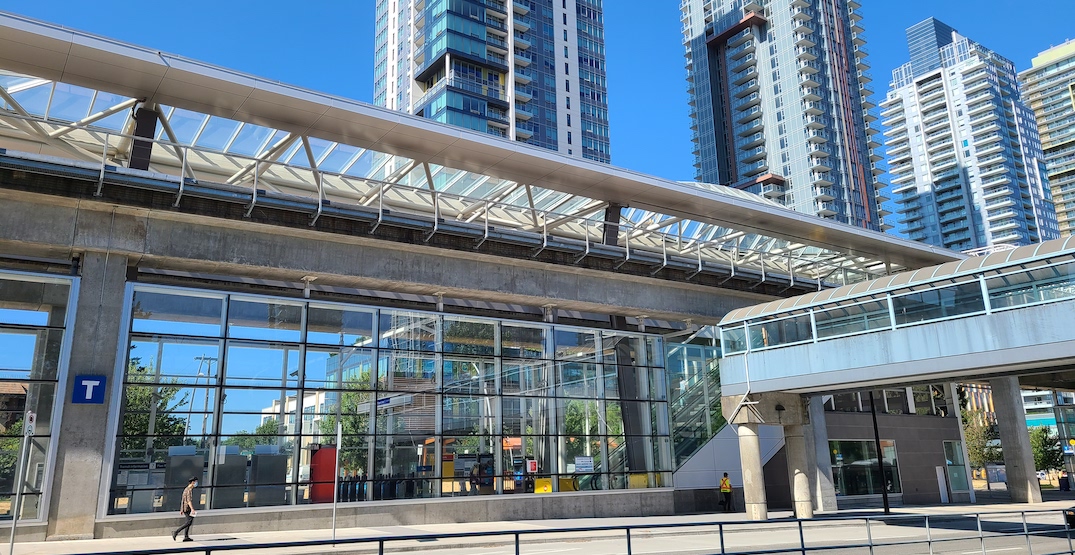 The cost of operating and maintaining a fully accessible public washroom at SkyTrain Metrotown Station is the primary hurdle for opening such a facility.

As part of the extensive rebuild and expansion of Metrotown Station that reached completion in 2017, TransLink constructed a fully furnished public washroom as part of its agreement with the City of Burnaby in exchange for the approval of the station overhaul. However, the washroom has been closed ever since — completely unused since its completion.

Upon city council’s direction, Burnaby Mayor Mike Hurley requested the public transit authority to cover the operating and maintenance costs of the washroom, instead of relying on a third-party entity to cover the cost.

But in response, Quinn stated TransLink’s operating costs are currently being highly subsidized by the federal and provincial governments, with $644 million in emergency safe operating funding covering budget COVID-19 shortfalls only through the end of 2021. At the moment, normal service levels are only being sustained by the provincial and federal governments.

Fares typically account for a big chunk of TransLink’s operating revenues, but ridership is still significantly below pre-pandemic levels at 57.4% of normal as of October 2021. It is unclear if the federal and provincial governments will renew safe operating funding in the new year.

Quinn also made reference to the 2018 approval by TransLink’s board of directors of a strategy to introduce public washrooms at busy SkyTrain stations and bus exchanges, with such facilities operated by third-party partnerships to maximize passenger experience, safety, and security, while also minimizing costs and risks to the public transit authority.

Third-party entities include TransLink’s retail tenants. The public transit authority intended to have the Metrotown Station washroom cleaned and maintained based on this third-party model, with the tenant of the new retail space constructed at the station responsible for the safe operation of the washroom. However, TransLink has not found success with leasing the space, and as a result, the washroom has gone unused. 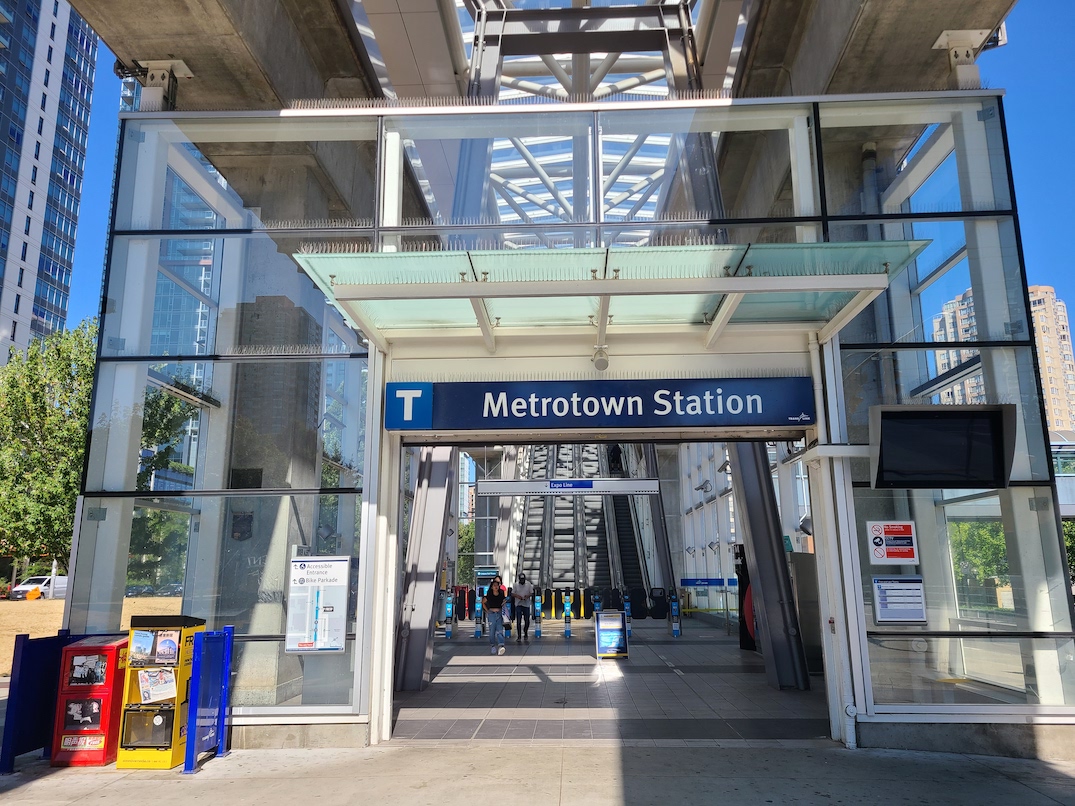 Quinn noted that implementing the 2018 public washroom strategy depends on the Mayors’ Council allocating funding through a future investment plan to make it a priority.

“The pandemic resulted in significant reductions in transit ridership and revenue, which have only partially been offset by senior government support,” wrote Quinn.

“The Board and Mayors’ Council are in the preliminary stages of developing an investment plan intended to stabilize TransLink’s finances and set out near-term investment priorities. The next step to ensuring availability of washrooms across the region is providing for their implementation and operation in a future investment plan, approved by the Mayors’ Council.”

Several recently implemented passenger amenities on the public transit system have their installation and ongoing operating and maintenance costs completely covered by a third party.

Dozens of dynamic wayfinding touch screens installed at SkyTrain stations and other transit hubs saw their equipment acquisition, installation, and operating and maintenance costs fully covered by TransLink’s advertising contractor Lamar, which displays advertising on the screens when not being used by transit riders.

The rollout of systemwide free WiFi for all SkyTrain stations, trains, buses, and bus exchanges through 2026 is a partnership with Shaw, which is covering the full cost of installing and operating the infrastructure.

During a public consultation this past summer that sought ideas on new and improved passenger amenities, the introduction of public washrooms was the most frequently suggested idea.

Over the years, a number of municipal governments, including previous requests by Burnaby, also raised their desire for washrooms on public transit.

“We know through outreach that customers are interested in washrooms on the system,” acknowledged Quinn in his letter. “In the past, factors like safety and cost have been reasons to not provide TransLink owned and operated washrooms.”

Currently, only the SeaBus terminals have fully accessible public washrooms, located at the northern end of the waiting areas. These ferry washrooms were recently renovated.

As part of the Millennium Line Broadway Extension project, future public washroom spaces are being included in Arbutus Station and Broadway-City Hall Station, but these will only be void, empty spaces upon the subway’s opening in 2025. Funding is needed for the installation of the fixtures and furnishing, and annual operational costs.

The City of Burnaby and TransLink have also had an impasse over building a new replacement pedestrian bridge linking the mezzanine level of Metrotown Station’s new central entrance. The old pedestrian bridge remains in place and disconnected from the reconfigured station layout, and passengers have been required to cross the street from the station to the bus loop and shopping mall ever since renovations began.

The municipal government set aside $17.25 million for Metrotown Station’s pedestrian bridge in its 2019-2023 capital plan, but the use of this funding for the project has yet to be enacted. As there was some uncertainty on when the pedestrian bridge project would begin, city council in 2019 redirected a portion of the $1.25 million set aside for planning the walkway during that fiscal year towards a water main project. 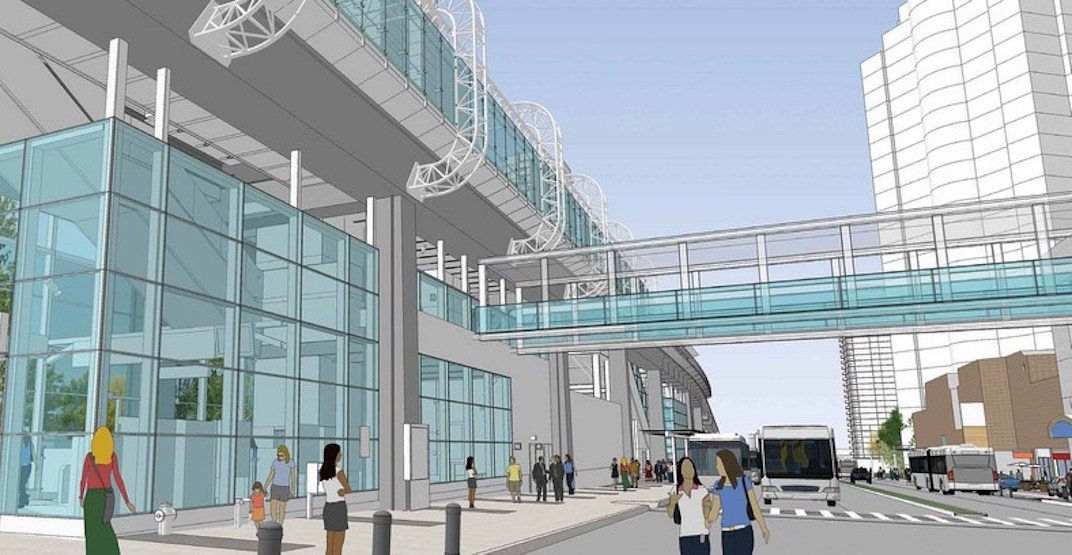