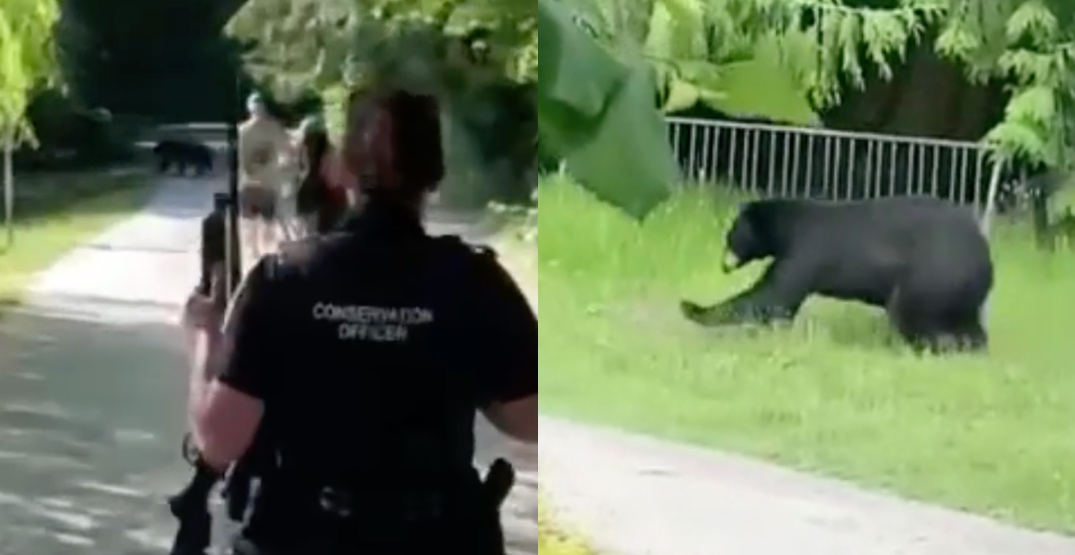 A black bear caught on camera chasing geese in a Metro Vancouver park over the weekend has now been put down.

On July 2, multiple bear sightings were reported in Burnaby’s Central Park. Several calls were made to Burnaby RCMP about the incident, and all the information was relayed to the BC Conservation Officer Service (BCCOS). Then, BCCOS attended Central Park in response and tranquillized the bear and he has since been put down.

“After assessment, the bear was put down due to his behaviour compromising public safety,” said COS.

“Putting down any bear or cub is an unfortunate outcome that we work so hard to prevent.”

A video submitted to Daily Hive shows a conservation officer approaching the bear.

Videos of the bear in the park went viral on social media, including one video showing the bear frolicking on the putting green, chasing geese and golfers alike.

The bear gets extremely close to humans in the footage.

“Ministry of Forests policies and procedures help guide Conservation Officers with regards to the management of bears, and include input from wildlife biologists, subject matter experts and the chief provincial wildlife veterinarian on specific incidents.”

“Every wildlife situation is unique and is assessed individually, taking into account ever-changing circumstances, such as the risk to public safety and the animal’s ability to survive in the wild.”

BCCOS said that it’s important to prevent future bear conflicts in communities by securing attractants like garbage, food, and birdseed.