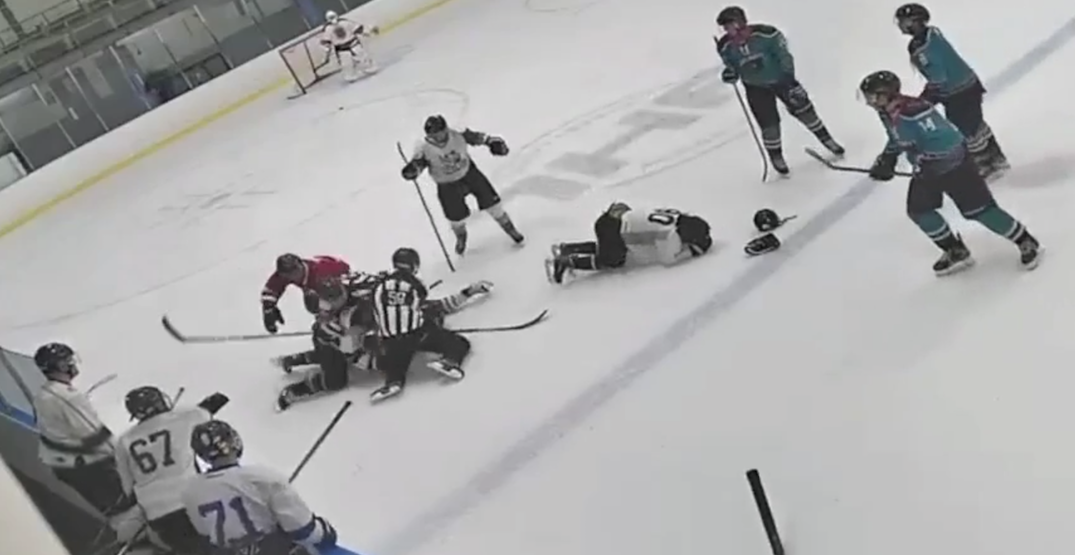 A beer league hockey player has been suspended indefinitely and is under investigation by police after appearing to use his skate to kick his opponent.

Video of the incident, which took place during an ASHL game at Scotia Barn (formerly Burnaby 8 Rinks) in Burnaby, BC, has since gone viral.

The now-suspended player was seen repeatedly punching the victim in the face prior to kicking him with his skate. The victim immediately clutched his face after the kick and fell to the ice.

Burnaby RCMP is investigating an alleged assault that happened during the Friday night game after it was reported to police on Tuesday.

“During the incident, the victim was allegedly kicked by another player, causing injuries that required medical treatment,” Burnaby RCMP Cpl. Mike Kalanj told Daily Hive. “Burnaby RCMP is continuing to investigate the circumstances and actions that led to the player’s injuries. Burnaby RCMP is in possession of video showing one angle of the incident, which has been collected as evidence. Investigators are still in the process of speaking with players and witnesses.”

Here’s a longer video of the incident.

In a statement released on its website, the ASHL said it is aware of the “on-ice incident that is circulating on social media.”

“The conduct and on-ice behaviour depicted in the video in no way aligns with the values of our league and the rules of the game. As a result of their actions, the offending player was issued a match penalty and a game ejection. Subsequently, the player has been suspended indefinitely and will receive supplemental discipline in-line with Section 2.15 (A) of the ASHL Rule Book.”

The ASHL added that it aims to create the “safest possible environment” for its players, which includes the use of real-time video footage that allows the league to review potential incidents.

The incident occurred during a Friday night game between Hotshots and Grizznasty in the men’s E2B division, which is the fifth-lowest men’s division offered by the ASHL at Scotia Barn this summer.

Players from both teams tell a different version of the event.

A teammate of the offending player on Grizznasty contends that the skate merely made contact with the victim’s arm and that injuries to his face occurred from earlier punches. The Grizznasty player pointed to the ASHL game sheet, which shows the victim returned to the game and racked up four of his five assists after the third-period incident.

A teammate of the victim told Daily Hive the Hotshots player was kicked in the face, but thankfully the skate blade didn’t make contact. The victim was bleeding from the mouth and nose, and is now seeking medical attention, the Hotshots teammate said.