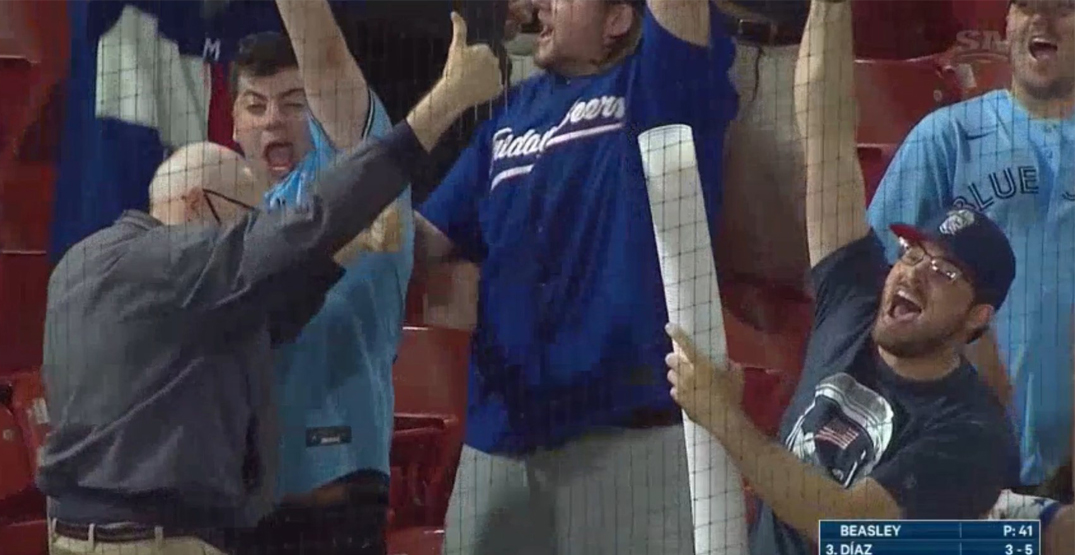 Those chants rang out from the third base side of Sahlen Field in Buffalo on Friday night’s Blue Jays game; an otherwise forgettable contest which saw the home team drubbed by the Houston Astros 13-1.

The most memorable part of the game had nothing to do with with happened inside the chalk lines. It was a band of fans who made it their sole mission to create their own entertainment when the on-field entertainment waned.

While the Blue Jays were busy getting blown out, a cup brigade was born.

Down by 12 runs and the game nearing its conclusion, Sportsnet’s TV cameras caught a group of fans down the third base line building a cup snake for the ages.

Just tuned into the Jays game and here's how it's going: pic.twitter.com/1vabrYxLi6

The crew started collecting cups in the sixth inning, but they slowly procured cups from nearby sections. It was a true welcoming Buffalo atmosphere, as dozens of fans offered their vessels to the growing structure down the third base line.

The “cup captain” preferred to remain nameless, but he was thrilled to be at the epicentre of the action. What started as a modest cup collection between him and two friends gained the attention of sections all around Sahlen Field.

“That’s kind of the culture of Buffalo, everybody’s a part of it,” he said. “I think that’s what’s been really cool about it. It’s been a long time since people have been able to go out and enjoy themselves in a group of people.”

As an avid baseball watcher and a diehard Buffalo Bills fan, he’s all too familiar with the fellowship he experienced among fans who had been cooped up for the last 15 months.

While this is the second consecutive summer when the Blue Jays have played home games at their triple-A affiliate stadium in Buffalo, last week was the first time since September 2019 that baseball fans were permitted into Buffalo’s ballpark.

In fact, it was the first time in over 100 years when a Major League Baseball game was played in the city of Buffalo, New York. Despite attempts over the years to recruit an MLB team to Buffalo, the last MLB game played in the city happened in 1915.

As the birthplace of “Bills Mafia,” Buffalo has a league-wide reputation for their tailgate culture. Diehard Bills fans can attest to the devout fandom, and they’re bringing that energy to Sahlen Field as the city has adopted the Blue Jays as their home team for the summer.

With the game well out of hand, witnessing the snake cup campaign seemed far more interesting than anything happening on the field between the Blue Jays and Astros.

Toronto thanks for playing in Buffalo.. we have a great time no matter what! from Torontobluejays

By the end of the game, Sahlen Field ushers came down and asked the group politely to stop collecting cups. The ringleader didn’t want to see all their hard work go to waste, so like a proud papa, he took the stack out to the concourse to do an inventory of his treasures.

But as he corralled his cup collection, most of his section stood up and cheered, and that might’ve been the biggest pop of the entire game at Sahlen Field that night. Fans chanted: “CUPS CUPS CUPS” as he exited the lower bowl.

The cup stack stood 291 cups tall. Compared to other snake cups you might see at other MLB games, CFL games, or even cricket games, it’s a fairly small stack. But the size of the stack didn’t matter; instead, the spirit of camaraderie loomed large that night at Sahlen Field.

“I lived outside of Buffalo for five years and that’s the lasting impression I try to leave on people is the common goal of the Buffalo fan,” he said. “It’s not a surprise to me that happened in Buffalo. That’s the least surprising thing to me that the whole community was on board with having a good time and enjoying themselves.”

Another gentleman who had a ticket for that Blue Jays-Astros game was Jerry Wszalek. A Buffalo native, he and his son were there with tickets as an early Father’s Day gift.

He was a little disheartened the on-field product wasn’t that competitive that night, but a few sections over, Wszalek heard the cheers of some boisterous fans chanting: “CUPS CUPS CUPS.”

At the urging of his nearby seat-mates, he made the trek over a few sections, and proudly made his contribution to the cup stack. As shown in the video, everybody around him celebrated like the Blue Jays had just won the World Series.

Wszalek strutted back to his seat and high-fived a few fans along the way, in the clip that’s since gone viral. He got the hero’s welcome, even though he was just doing his civic duty as a fan and playing along.

“I was surprised people were reacting to me the way they were reacting. Especially on the way back, everybody wanted to high five me,” Wszalek said. “All I did was give them a cup.”

The video of the cup stacking took hold on social media and reactions to the clips have been overwhelmingly positive. From “nature is healing” to “just guys being dudes” to “welcome to Buffalo” to “sports bring people together,” the cup brigade approached meme status.

If the game were a little more competitive, fans may have taken issue with fans distracting from the action on the field, but for the most part, the crew gave the Buffalonians something to cheer for on Friday night.

“From my observation, no harm, no foul,” Wszalek said. “It was good, clean fun. The fans embraced it, and everybody supported it. To me, you couldn’t have asked for a better behaved group of people cheering and having fun.”

“If anything, me participating was to show we can do this and we can celebrate. We’ve got a baseball game going on with our favourite Major League team, and we can still participate as Buffalonians: home of good neighbours.”

Another member of Sahlen Field’s unofficial cup crew was Anthony Arbatosky. He watched the Blue Jays win in walk-off fashion last Wednesday in the pouring rain against the Miami Marlins. Two days later, he was back at the ballpark to bear witness to a much different contest.

“The cup stacking really started to get going after the Astros started to pull away with it,” Arbatosky said. “I personally got involved after the seventh inning stretch. I didn’t know who any of the guys were, but we were losing and I saw something going on, so I decided to join after hearing a heavy amount cheering for the first time all night.”

For the next three innings, he joined in the fun and helped recruit cup-bringers from all around the ballpark, including the upper deck of the stadium. Last Wednesday was the first large-scale sporting event Arbatosky attended since the start of the pandemic.

Like most Buffalonians, he realizes having the Blue Jays in his own backyard is a once-in-a-lifetime summer fling. True to Buffalo form, the fans are enjoying every game like it’s their last.

“With the capacity increasing to 80 per cent in the upcoming games, I think it’s safe to say that the high energy levels and rowdiness of the crowd will continue,” Arbatosky said.

“We know that having the Jays in town or a Major League team in general will probably never happen again, so we are all just making the most of it and enjoying the time we have.”