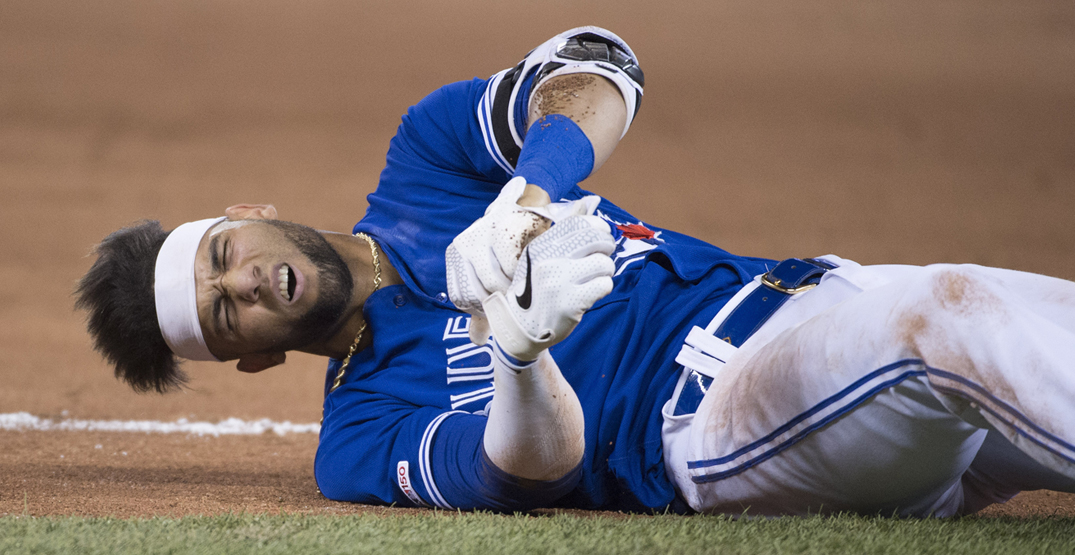 “We talk about five tools, it’s six. If you don’t play, the other five don’t matter. It takes six tools to be a superstar, and the sixth one’s more important than the other five.”

Those words, said by former MLB executive and MLB Network analyst Dan O’Dowd, could not be more true. Without health, a baseball player’s skills are irrelevant.

If they can’t stay on the field, their light tower power, blistering speed, hitting for average, their rocket arm or supreme defence doesn’t matter. Being healthy enough to play is paramount in Major League Baseball.

The Toronto Blue Jays are struggling to keep players on the field in 2021. Through the first two months of the season, they’ve suffered the equivalent of an Operation Board’s board of injuries to their roster.

Kirby Yates and David Phelps are out for the season. The team’s prized offseason acquisition, George Springer, played four games in between two trips to the IL, with his timeline for a return still a mystery.

But this isn’t a problem exclusive to the Blue Jays. Injuries are on the rise across all 30 teams in baseball. According to ESPN Stats & Info (via Buster Olney), 2021 has seen the most uses of the injured list through the end of May.

Even discounting COVID-related injured list stints, here’s how the most-injured teams ranked in terms of trips to the IL through the first two months of the season. (Data supplied by Derek Rhoads of Baseball Prospectus) 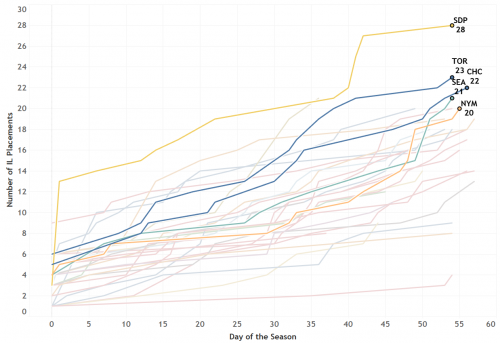 In 2017, the Blue Jays had 25 players go on the injured list the entire season, which cost the team 300 man-games lost and close to $32 million in salary on injured players. At their current pace, the Blue Jays are on track to eclipse that 25-player total any day now.

The 2021 Blue Jays have used 26 injured list stints, by far the most of any Blue Jays season dating back to 2001 (injury data was unavailable from 1977 to 2000). It should be noted that MLB implemented a 10-day injured list starting in 2017, when the prior minimum a player was off the active roster. 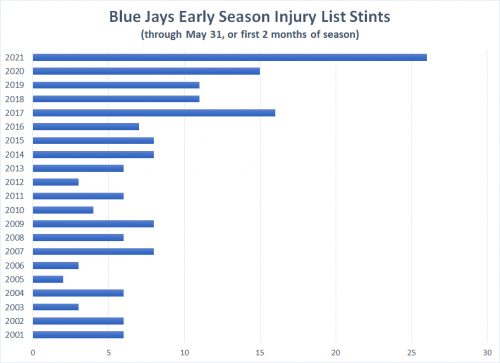 So, why the sudden spike in injuries? It’s difficult to pinpoint one root cause; instead, it could be due to a handful of mitigating factors.

Although the 2021 MLB season looks like a much closer facsimile to a “normal” MLB season than 2020, some of the lingering ill effects took hold early last year. We’re just seeing the side effects from those factors now.

Someone who deals with baseball injuries in the sports medicine realm is Oshawa, Ontario-based RMT Justin Lewis, who also teaches clinical anatomy at Centennial College in Toronto. 65% of his practice deals with baseball-related injuries.

He believes one cause could be the erratic start-stop training schedule baseball players adopted over the last 15 months. Prior to the pandemic grinding the MLB season to a halt last March, players were gearing up for the 2020 season in spring training. Then, games came to an abrupt halt and players didn’t know whether they’d play again in 2020.

“The common theory tends to be the aggravating factors have already passed,” Lewis told Daily Hive. “You can’t go back and out-train it now, or out-rehab it now because it was all about the start-stops, the ongoing training, all the stuff that happened last year and in 2019, it’s showing now.

“It seems like some of the guys had altered training offseason, the start-stop, or maybe they had a facility to go to, maybe they didn’t. It wasn’t an ideal lead-up, and that’s why we’re seeing more of a spike this year.”

The team didn’t reconvene until early July for “summer camp” at Rogers Centre in Toronto; with some players going nearly four months in between game action.

Lewis said most baseball seasons typically have two injury spikes; in the early season, just after things ramp up during the start of the regular season, and closer to the end of the year when players feel the rigours of the 162-game grind.

He referred to “acute, chronic workload,” a figure that measures an athlete’s intensity, workload and fatigue. The ideal range to limit injuries is between 0.8 and 1.3, where players don’t see too much inactivity, and their workloads don’t see a sudden spike.

The Blue Jays have missed several key figures on their roster this year because of injuries, and while it seems like their string of grave injury luck in 2021 is unprecedented, it’s not all that uncommon.

“Broadly speaking, injuries coming in bunches or one team having a specifically rough patch of injuries early in the season is pretty normal,” said Derek Rhoads of Baseball Prospectus. “What makes 2021 and 2020 unique is the volume. The sheer number of injuries is well past what we have seen in previous full length seasons.

“It’s hard to know definitively the cause of the increase, but I agree that it’s hard to not to draw a connection to 2020. These past two years are unprecedented disruptions in the modern era.”

According to Rhoads’ data, MLB already reached their 2019 and 2020 injury peaks with 233 and 241 total players on the IL at one time. This year, that total has already been eclipsed with 242 injured players.

Less then 2 months into the season, the 2019 and 2020 peak number of players on the IL has been eclipsed.

As the father of a 13-year-old and 17-year-old who play baseball, Lewis is all too familiar with kids who want to push themselves to the limit, even at the youth level of rep baseball. With groundbreaking technology that tracks everything from velocity, to spin rate, the data is ripe for the taking.

But it hearkens to what O’Dowd said, the sixth tool is health, which is the most important tool in baseball. Lewis offers these tips to young (and young-at-heart) baseball players hoping to stay healthy and contribute on the field.

“We want the person to be strong, athletic and mobile,” Lewis said. “We want them to eat well and sleep well. All those decrease your injury risk. We want to be athletic, we don’t want to be one sport.

“Be athletic, be strong, be mobile. We want our bodies to be able to do what we want to ask them to do.”

If there was a magic potion to prevent injuries, someone would have developed it by now. That’s why MLB teams funnel millions of dollars on training and player conditioning; not only to help players get into shape, but to maintain that threshold and allow them to play game in and game out.

It’s an impossible science to forecast when players might go on the injured list. All a team can do is provide the tools and advice for proper training, treat any potential injuries and get the player back into action as soon as possible.

“We can’t predict injuries, but we can predict factors when we look back at injuries,” Lewis said. “It’s like insurance rates; unfortunately, you can’t predict it. You get dinged based on the people ahead of you.”