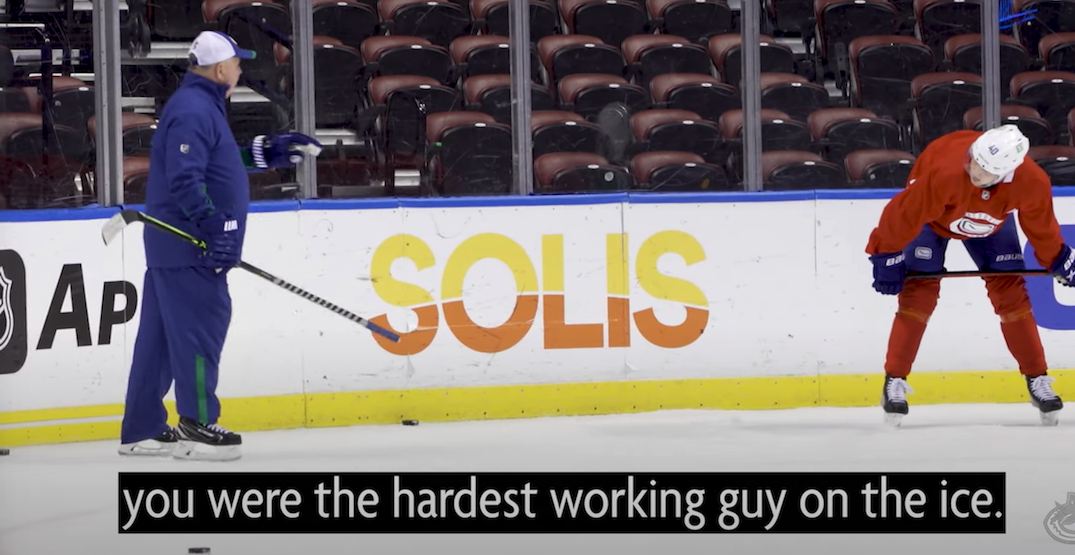 Bruce Boudreau has received a ton of praise from fans and media since taking over behind the bench of the Vancouver Canucks.

How could he not?

After nine games as head coach, the Canucks still haven’t lost in regulation time with Boudreau at the helm — the first time Vancouver has done that in almost 10 years. We’ll see how long the streak lasts with the toughest stretch of the season upcoming, but undoubtedly the veteran bench boss has made an immediate impact.

Boudreau’s charisma is obvious in media availabilities, but until now, we haven’t seen what he’s like interacting with his players.

The Canucks had Boudreau mic’d up at practice yesterday in Florida, and released a compelling video of it this morning.

Boudreau is upbeat throughout the 4:41 video, taking time to provide encouragement to players one-on-one, and cracking some jokes to keep the mood light as well.

When it came to the power play, Boudreau was seen providing tips to Tanner Pearson, Quinn Hughes, and Brock Boeser — related to movement and decision-making.

At the end of practice, Boudreau put Boeser, Elias Pettersson, and Jason Dickinson through a skating test called the “mountain.” The trio of players, who were returning from COVID-19 protocol, needed to complete the skate in 45 seconds each to prove they were ready to play.

All three players appear to have successfully completed the task, as Boudreau said yesterday that they would each draw into the lineup.

Once completed, Boudreau offered some words of encouragement to Pettersson, who has been working hard but struggling with confidence this season.

“Did you know, your last practice before you were sick, you were the hardest working guy on the ice? That’s really good, that’s going to get you places,” Boudreau said, before giving him a pat on the back.