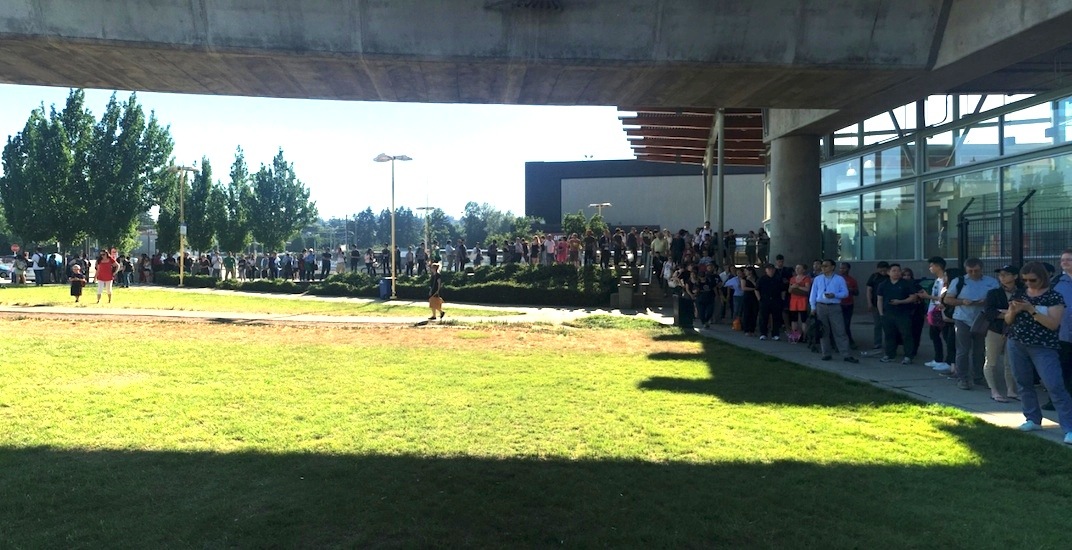 A bus bridge shuttle lineup during the SkyTrain service disruption on June 18, 2018. (submitted)

Last night’s severe disruptions to Millennium Line and Expo Line service lasted for about six hours due to an issue with a critical cable that supports the functions of the automatic train communication system.

TransLink spokesperson Chris Bryan told Daily Hive there was a break in the cable that relays information between the SkyTrain control centre and the trains.

Crews with SkyTrain were unable to immediately identify and locate the problem, as system indicators showed there was a problem somewhere within the large area of between Production Way Station and Braid Station.

“Our technicians had to determine where the damage was and fix it,” said Bryan. “There wasn’t a clear definite break they could immediately identify, but eventually they did find a small break in a cable that was causing the issue.”

The disruption began at approximately 5 pm and service was not restored until about 11 pm, but the actual repair did not occur until the overnight hours.

This was one of the longest, non-snow related, major disruptions to SkyTrain service since the complete service breakdown incidents of 2014, and its impact was significant as it began during the busy evening peak rush hour. Passengers also waited in long lines for bus bridge shuttles between the affected stations.

“It was a difficult one to resolve, and we really appreciate our customer’s patience through that,” he continued. “It was definitely not a good night for people trying to get through that area.”