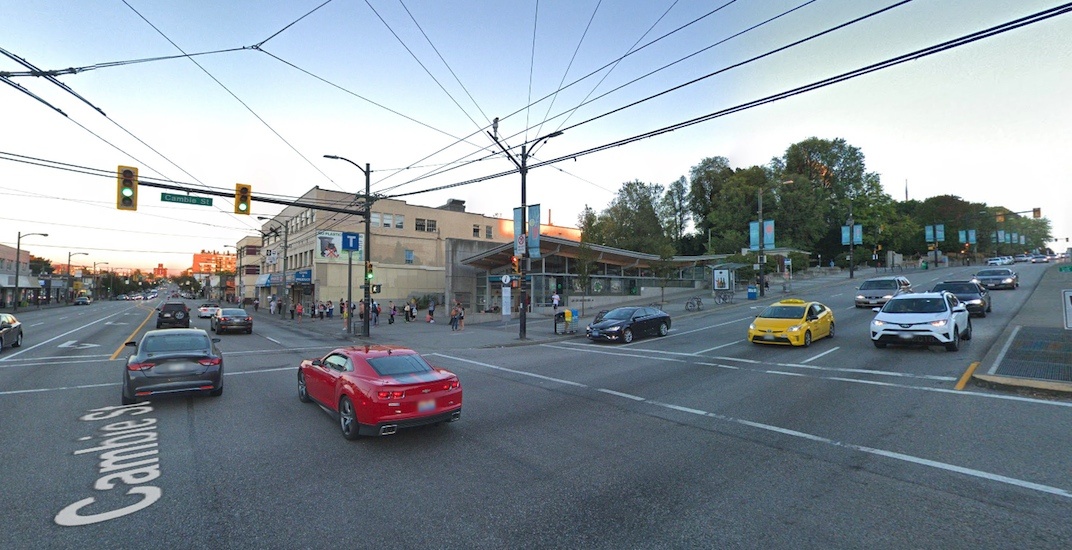 The existing Broadway-City Hall Station entrance for the Canada Line on a City-owned block. (Google Maps)

The BC Ministry of Transportation has provided the first preliminary details on what kind of road traffic disruptions can be expected on Broadway to accommodate the construction of the Broadway Extension of SkyTrain’s Millennium Line.

The process of constructing each of the six underground stations will be about two years, with about one block of excavation required at each station site. However, the construction pits will be covered to allow road traffic to move through the areas.

Within these station construction areas, two lanes of traffic will be maintained in each direction for buses and other vehicles on Broadway, except for the intersection of Broadway and Main Street due to the narrower street width, which means there is less room for construction. As a result, there could be more traffic impacts during the construction of Mount Pleasant Station at this intersection.

But generally, there are plans to retain three lanes of traffic in each direction along Broadway between the station construction areas, with one lane dedicated solely for buses.

Curbside street parking will be banned 24/7 during the construction period to allow for the efficient movement of buses and all traffic. Currently, these restrictions to create bus-only lanes west of Arbutus Street are only during peak hours.

Consideration is being given to increase curbside street parking on adjacent streets and in off-street parking lots to account for the loss in parking supporting local businesses.

Beginning in 2020, trolley bus routes No. 14 UBC/Hastings, No. 16 Arbutus/29th Avenue Station, and No. 17 Downtown/Oak will be rerouted to nearby streets, including 12th Avenue, Cambie Street, Macdonald Street, and 4th Avenue.

The 99 B-Line and No. 9 Broadway/Alma trolley bus will remain on Broadway throughout the construction process.

Buses along Broadway move 100,000 people per day, while cars travelling along the route move about 30,000 people.

The exact timing and nature of the disruptions at each station construction area will be determined after the provincial government selects a major contractor for the $2.8-billion project by the spring of next year.

Map of the route and station locations of the SkyTrain Millennium Line Broadway Extension. Click on the map for an enlarged version. (Government of BC)