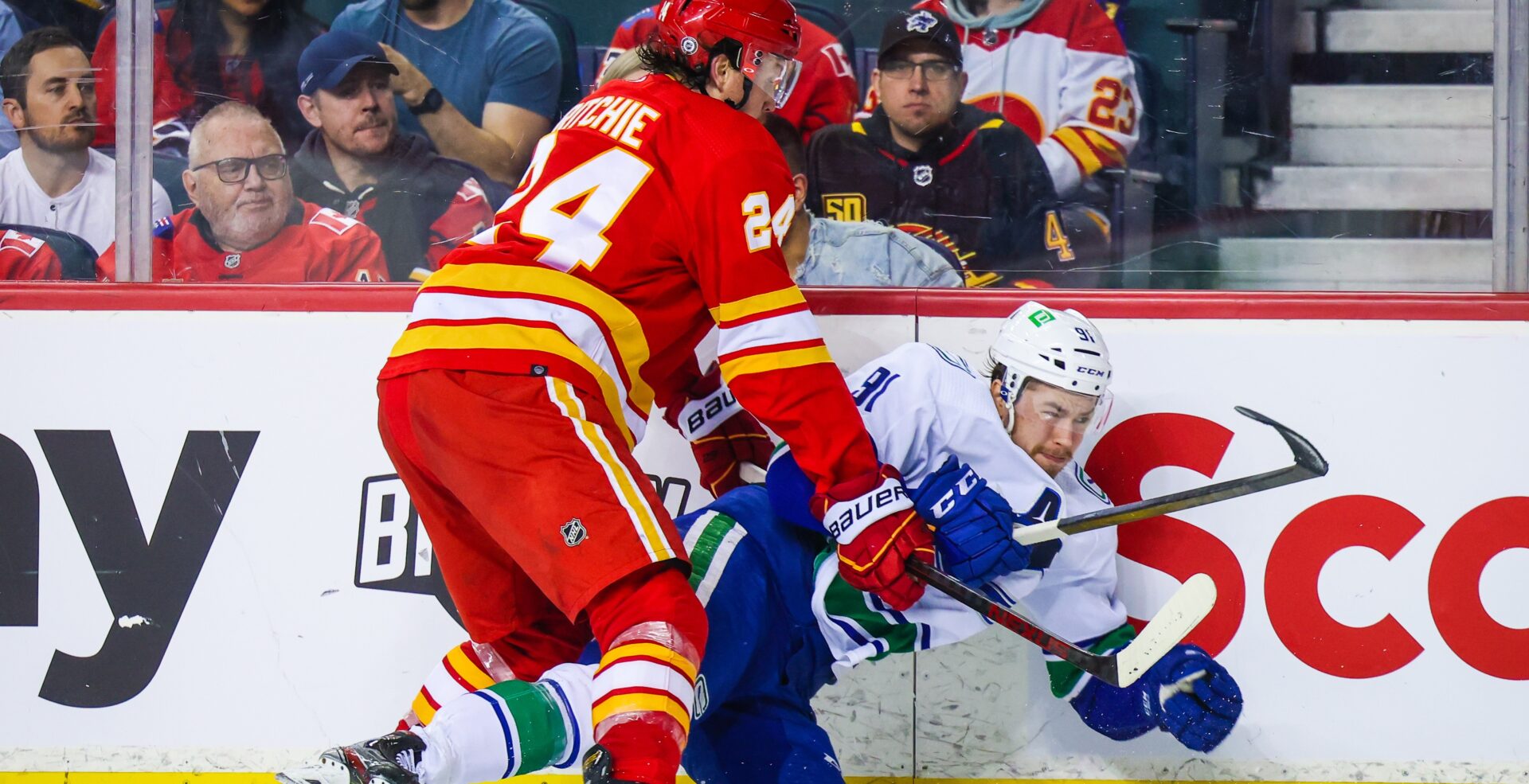 The Vancouver Canucks didn’t officially face playoff elimination on Saturday, but they’re staring it dead in the eyes.

Following Saturday’s 6-3 loss to the Calgary Flames, the Canucks’ playoff odds dipped to under 0.1%.

MoneyPuck.com and The Athletic both have them rounded down to zero percent, and well, it’s almost impossible the Canucks manage to pull this thing off.

With 87 points on the year, the maximum number of points the Canucks can finish their season with is 93.

Even if Vancouver wins all three of their remaining games, they’d need everyone else ahead of them to fall apart completely.

The simplest way the Canucks get bounced from the playoff push is with a Vegas Golden Knights win on Sunday night over Arizona.

Vegas and Dallas play each other Tuesday, so either one of them will be out of reach for the Canucks by that point in time should the Golden Knights win tonight.

Dallas is dormant until Tuesday, but close out the season with games against the Coyotes and the Ducks later this week. A single point in any of those three games, and the Canucks are toast.

The #Canucks will be eliminated from the playoffs if:

Nashville and Los Angeles are irrelevant to the Canucks’ playoff hopes — if you can call them that — as they’re both out of reach for the Canucks to catch. Nashville has 93 points and holds the regulation wins tiebreaker, while Los Angeles is up at 96 points.

For the Canucks to make the playoffs, they’d need to go 3-0, have Dallas go 0-3 with all regulation losses, and have Vegas go 1-3-0. In other words, they’d need nine separate games to go in their favour. It might just be easier to track what needs to happen for them to get bounced.

The Canucks players are still at least holding onto that last little bit of hope.

“We’ve been doing this all year, so that’s what we’re going to keep doing,” Oliver Ekman-Larsson said on Saturday. “There’s no quitting in that room. We’ve showed it so many times this year. Take it one game at a time and see where it takes us.”

But Canucks head coach Bruce Boudreau was a bit more blunt in his assessment of the likely elimination coming this week.

“We pushed from December 5th until now, and I expect us for the next three games to keep pushing again. But we know that our ultimate goal is probably not going to be reached,” Boudreau said postgame.

Boudreau said that the Brett Ritchie go-ahead goal in the third period last night that put the Flames up 3-2 just 24 seconds after Conor Garland tied it killed his team’s momentum.

“It was just a real ‘big-sock-in-the-head-type-thing’,” Boudreau said. “That was difficult, but I mean, not to make excuses but it is difficult to get up, emotionally up, for every game. It’s what makes the playoffs special, because you can do it for short periods of time.”

Boudreau enters the final week of the regular season amid uncertainty about his contract status for next year. The Canucks reportedly want him back, though no official announcement has been made regarding accepting or declining options for next season.

And while Boudreau isn’t talking contract status just yet, he has already begun thinking about what’s next for the Canucks. Read into these comments what you will:

“We’ve had to do it every single game and sometimes it works and sometimes you get the inconsistencies, but it’ll make them better for next year for sure,” Boudreau said. “They’ll know the consistency they have to go from Day 1 to Day 82.”

For now, the Canucks are playing Tuesday night at home, with puck drop set for 7 pm PT against the Seattle Kraken. Whether that game means anything in the standings or the Canucks will have succumbed to elimination, well, we’ll just have to wait and see.