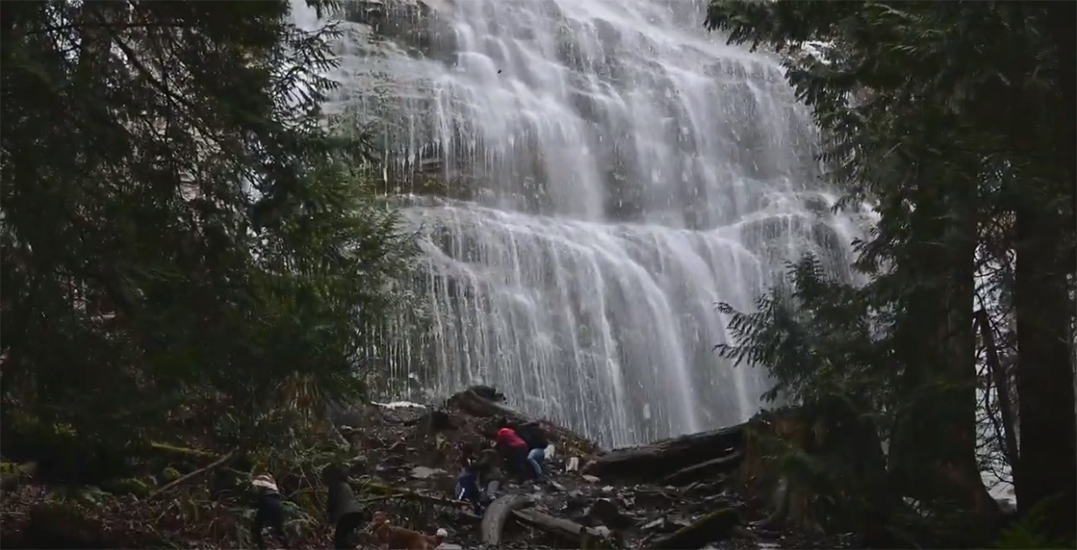 Submitted by a Susan Summers.

A number of hikers at Bridal Veil Falls Provincial Park in Chilliwack were in for a close call during British Columbia’s last cold snap.

A video captured and shared by a Daily Hive reader shows large chunks of ice flying off the top of the waterfall, causing hikers below to run and duck for cover.

The reader who captured the video says that the incident occurred over the past weekend, adding that there were about a dozen people hiking up to the waterfall when it happened.

“I don’t think anyone got hurt, at least from what I could see,” they tell Daily Hive. “Everybody started climbing down right after it stopped, but [the] ice continued to fall in smaller amounts.”

They estimated that some of the pieces of ice were “as big as a regular football.”

According to the local search and rescue organization manager, falling ice can occur more often than you think and anywhere that there’s a heavy flow of water.

“Anytime you’re getting temperatures heading up a waterfall or anytime the waterfall is close to freezing or starting to freeze, you’re going to get some icefall for sure,” Tyler Duncan, Squamish SAR Manager, tells Daily Hive. “And then as the temperatures warm up and the ice starts to melt, the ice is going to fall.”

The same incident has also occurred to people hiking in the Sea to Sky region.

“There was a similar incident at Brandywine falls a couple of years ago,” Duncan explains. “Some people were hiking around the bottom of the falls, and a solid couple tons of ice came crashing down the falls, and it was a pretty close near-miss for them.”

“It can definitely pose a pretty serious risk.”

Duncan notes that falling ice can happen in any area that has a waterfall, forested areas or even cliffs that have heavy water seepage.

“You have to be really aware as those temperatures fluctuate that ice can come down.”