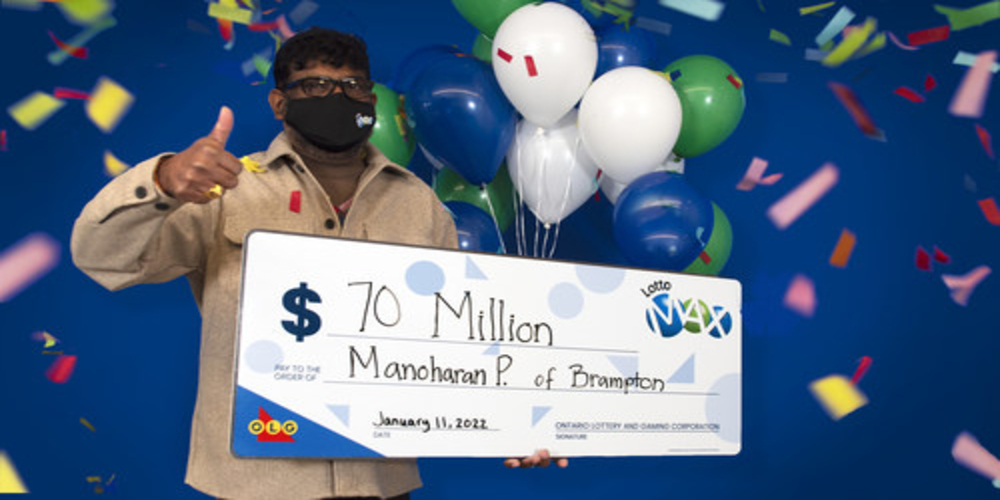 Ontario has gained a new millionaire in Brampton resident Manoharan Ponnuthurai after he scored big in the December 17, 2021, LOTTO MAX jackpot.

The 54-year-old has been playing the lottery for 30 years. What started as a fun way to imagine what could be with his father has now made Manoharan’s pockets a whole lot fuller.

“I had many dreams about winning it ‘big’ one day, and a few times I came close,” said Ponnuthurai. Fifteen years ago, he won $2,800 with LOTTO MAX’s predecessor, SUPER 7.

Over the years, Manoharan says he regularly plays both his own numbers or uses Quick Pick. When it comes to the fresh $70 million in his bank account, it was the numbers from a Quick Pick selection that won him the jackpot.

“I heard on the news that someone in Brampton won $70 million, so I started checking my numbers. One by one, the numbers were matching, and by the fourth number, I knew I won something,” he said. “That’s when I started shaking and called my wife and children to help me check. As each number matched, my heart was racing faster and faster.”

In disbelief, Manoharan checked his ticket on the OLG App for confirmation. As “BIG WINNER” displayed on the screen, he says he began to shake. “I was in shock, and I quietly kept saying, ‘I won. I won!'”

After celebrating with his family and processing that he is the province’s newest millionaire, Manoharan says he feels blessed and is starting to think about what he wants to do with his win. However, retirement isn’t in the picture for now.

Manoharan will continue to run the small manufacturing company he owns but says his wife will retire immediately to begin studying again. He does, however, have some travel plans and is working on giving back to his community.

“I want to explore Europe. I want to take time to see the entire continent and make ‘friends’ with all the beautiful spots around the Mediterranean Sea!” said Manoharan.

The winning ticket was purchased at Circle K at the intersection of Torbram Road and Countryside Drive in Brampton.