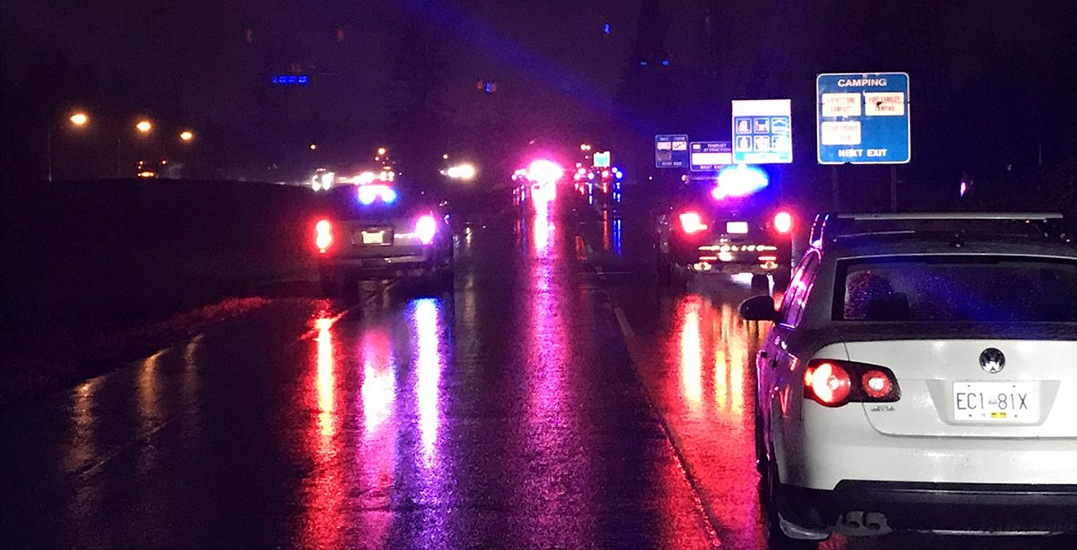 A police pursuit that carried over the span of three cities has ended with a suspect in custody.

On Thursday, January 3, at approximately 8 pm, the Surrey RCMP received reports of an assault in progress that was taking place inside a vehicle.

The suspect’s car was a white BMW sedan and was first found by the Lower Mainland Police Dog Service (LMD PDS) in Chilliwack. When a police officer pulled their car in behind the suspect vehicle, the driver quickly reversed, crashing into the police vehicle, and proceeded to flee the area.

A police pursuit then took place along Highway 1, spanning from Chilliwack through Abbotsford and into Langley, with police officers from each of those jurisdictions taking part.

The chase finally ended when a spike belt was deployed, thus stopping the BMW in its tracks. According to a police statement, officers believed that the victim of the reported assault was still in the vehicle and explain that the spike belt was “deployed out of an abundance of caution.”

hwy #1 closed westbound at 232nd due to police chase involving abbotsford police! 😳 they tried to throw out the spike strips! pic.twitter.com/RW5Gg6YfCB

The suspect vehicle was stopped on Highway 1 near 232 Street and the alleged assault suspect was arrested. As suspected, another passenger was also found in the vehicle.

The investigation continues with the suspect to appear in court later today.

“Thanks to the seamless collaboration between multiple jurisdictions, the suspect was successfully apprehended and the victim nor the public were put at further risk,” says Sgt. Chad Greig of the Surrey RCMP.