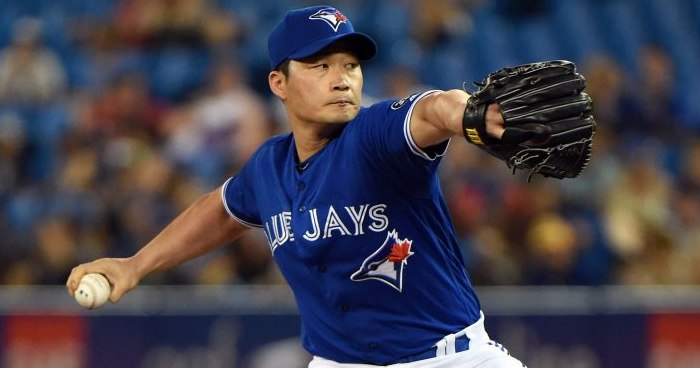 Seunghwan Oh is reportedly on the move from the Big Smoke to the Mile High City.

As the Blue Jays played the Minnesota Twins at the Rogers Centre, reports surfaced mid-game about the Jays making traction on a trade involving one of their best relievers.

Once the final out was recorded, that deal appears to have reached the finish line. Fox Sports’ Jon Morosi reports the Blue Jays and Rockies have agreed to a deal which would send Oh to Colorado.

As of yet, there’s no official word on who the Blue Jays are getting back in return, but Sportsnet’s Shi Davidi says Single-A first base prospect Chad Spanberger is involved in the deal.

A-ball first base prospect Chad Spanberger expected to be part of #BlueJays return from #Rockies for Seunghwan Oh, per source.

Given the Blue Jays’ position in the standings, Oh was a luxury the team no longer needed. As contenders look to beef up their bullpen for their playoff pushes, Oh was a prime trade candidate for a team on the cusp of contention like the Rockies.

The 36-year-old reliever was having an impressive year with the Blue Jays, making 48 appearances out of the bullpen, striking out 55 batters in 47 innings of work, while walking only 10 batters.

Oh signed for a very reasonable $1.75 million salary for the 2018 season and his contract includes a lucrative $2.5 million club option for 2019. Considering the rising cost of relief pitchers, $2.5 million is a penance to pay next year for a solid right-handed bullpen arm.

Not only do the Rockies get Oh for the 2018 playoff push, he could come back for the 2019 season in Colorado at a very affordable rate.

With this trade, the Blue Jays have gotten a head start on the dismantlement of their bullpen. Out of all their active relievers on the roster, Oh was the most valuable on the Blue Jays’ roster. Other bullpen pieces who could be on the move leading up to the July 31st non-waiver trade deadline: Tyler Clippard, John Axford and potentially even Ryan Tepera.

Last year, the Blue Jays made a similar trade involving one of their best right-handed relievers: Joe Smith. Toronto dealt Smith to the Cleveland Indians for two prospects: Thomas Pannone and Samad Taylor.

Pannone has since made a name for himself as one of the Blue Jays’ most intriguing pitching prospects. Earlier this year, he was suspended for 80 games for testing positive for performance-enhancing drugs. Since being reinstated, he’s been promoted to Triple-A with the Buffalo Bisons.

With the 2018 season essentially a write-off at this point for the Blue Jays, it makes sense for this team to restock their farm system by trading away most of their pending free agents. The Oh trade was just the first of many more moves to come from the Blue Jays.