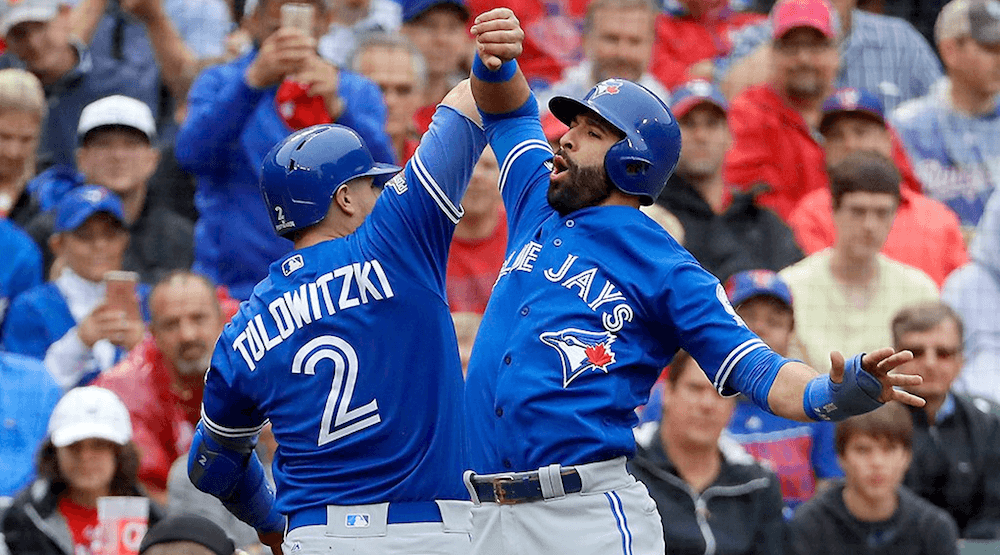 The Toronto Blue Jays have taken a 2-0 series stranglehold after winning Game 2 by a score of 5-3.

Toronto did their damage with the long ball, tagging Rangers starter Yu Darvish with four home runs. It’s the first time Darvish has given up four homers in one game in his career, and the first time the Blue Jays have homered four times in a single postseason game.

Unlike Game 1, the Rangers were able to get hits with regularity, tallying 13 of them in the game, including nine off Jays starter JA Happ.

“You know they’re going to get hits at some point and unfortunately they had plenty in the first few innings,” Happ told Sportsnet’s Hazel Mae after the game. “I was able to bare down and try to execute. I tried to minimize the situation as best I can, and luckily I was able to get out of most of them.

#Tulo is diggin’ the #postseason so far: https://t.co/bautN2WOm2 #ALDS pic.twitter.com/45LJpsTn5f

Toronto got on the board early in the second inning. After a lead-off walk by Jose Bautista, Thursday’s hero Troy Tulowitzki hit a two-run home run to give the Jays an early lead.

Anything you can do, I can do better

The Rangers got their first meaningful run of the series in the bottom of the fourth inning, when a two-out single by Ian Desmond scored a run to cut the Jays’ lead in half. Carlos Beltran was up next with runners on the corners, but JA Happ was able to get out of a jam, getting him to ground out.

While Texas had to scratch and claw just to get one run on the board, the Blue Jays made it look easy in their next at bat.

Darvish is serving them up, wow.. Punch in the gut for the Rangers after threatening all day.

Yu Darvish got hit hard and hit often in the fifth inning, giving up three solo home runs to Kevin Pillar, Ezequiel Carrera, and Edwin Encarnacion to stretch Toronto’s lead to 5-1. Darvish was taken out of the game before the start of the next inning.

JA Happ was taken out of the game in the sixth inning after giving up a single to Ryan Rua. The 20-win pitcher gave up nine hits, but walked only one batter and surrendered just one run.

#Rangers were 2-for-18 with RISP in this one. Big reason there was no #Rewrite

The Rangers threatened in the seventh, getting a lead-off double from Desmond, who was moved over to third on a fielder’s choice. The next batter was Adrian Beltre, who hit a grounder to Josh Donaldson. Donaldson threw out Desmond at home, on a play that Desmond should have scored on. Desmond hesitated, which cost the Rangers a run given the play was close enough to warrant a replay challenge.

With two outs and a runner on first and second, Jason Grilli was brought in to face Jonathan Lucroy, who popped out to get the Jays out of the inning unscathed.

The Rangers finally got their first multi-run inning of the series in the eighth inning. With Francisco Liriano in the game for the Blue Jays, Texas began getting the bounces.

Mitch Moreland had a lead-off double on a ball that was hooking foul, but glanced off first baseman Encarnacion’s glove. Then after Liriano walked Robinson Chirinos, he took a comeback pitch to his head, that bounced into centre field. That scored Moreland and advanced another runner to third.

The ball glanced off Liriano’s head, and while he remarkably didn’t seem any worse for wear, he was taken out of the game and to hospital, hopefully for precautionary reasons.

Banged up closer Roberto Osuna came in for Toronto. He was terrific, getting Desmond to ground out, but a runner scored to cut the lead to 5-3.

A passed ball by Russell Martin put a runner on third base, and once again the pressure was on a Jays pitcher. With Beltran up to bat, Osuna got a huge strikeout to end the inning.

Osuna was stretched further in the ninth, and after a lead-off double to Beltre, retired the next three batters to get the save.

Roberto Osuna threw 31 pitches on the way to a five-out save. Fastball 95-98 mph. #BlueJays