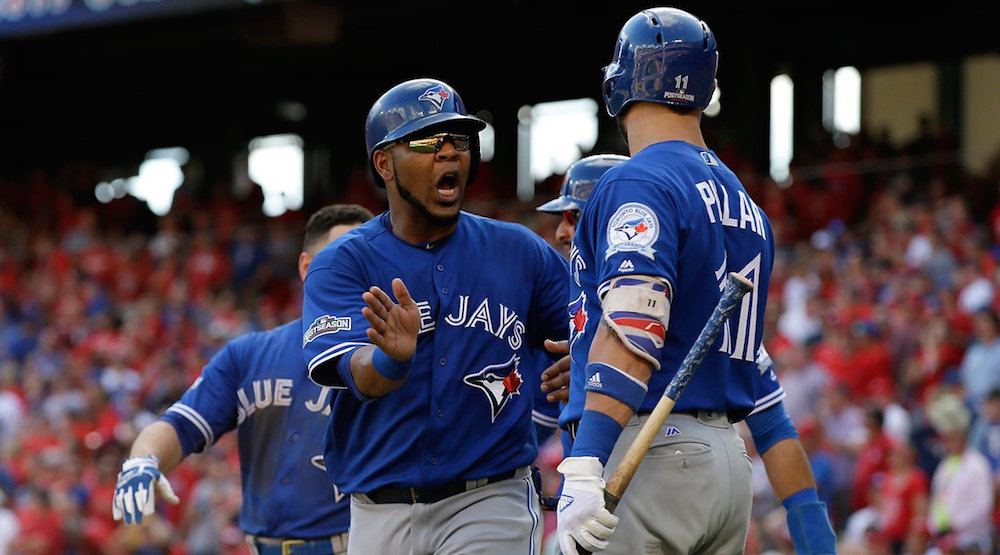 There were no fights, but the Toronto Blue Jays landed delivered a knockout blow in Game 1.

Toronto took a 1-0 series lead over Texas after blowing-out the Rangers 10-1 on Thursday. The Jays won on the strength of some great hitting and lights-out pitching from starter Marco Estrada.

Estrada was brilliant, giving up just four hits and one run, coming two outs short of the first complete game of his career.

The Blue Jays began to get to Hamels in the third inning. Ezequiel Carrera reached second base on a walk and a wild pitch. With two outs, Josh Donaldson sent a hard line drive towards Adrian Beltre at third base. The ball ricocheted off Beltre’s glove and into the outfield. Carrera scored, while Donaldson made it to second on a very close play that was reviewed.

That was Texas’ best chance to get out of the inning and they got another when Edwin Encarnacion hit a ball off Hamels’ glove at the next at-bat.

Donaldson scored on an RBI single from Jose Bautista after a long at-bat that included an eye-level pitch that he fouled off to stay alive.

Hamels walked Russell Martin next to load the bases, setting the stage for Troy Tulowitzki. Tulowitzki cleared the bases, scoring a triple on a ball that Rangers centre fielder Ian Desmond probably should have caught.

Pillar would have caught that, put a dent in the wall and come up smiling. #BlueJays #ALDS

Hamels threw 42 pitches in the inning and just like that, it was 5-0 Blue Jays.

#BlueJays forced Cole Hamels to throw 42 pitches in the 3rd. That's the most he's thrown in a single inning in his MLB career

Toronto piled on in the fourth inning, getting a home run from Melvin Upton Jr to make the score 6-0. An error and a passed ball put Devon Travis at second, allowing Donaldson to single home a run to make the score 7-0.

That spelled the end of the day for Hamels, who won 15 games for Texas in the regular season this year.

There was no more scoring in the game until the ninth inning, when the biggest villain in Texas, Jose Bautista, hit a three-run homer to extend the lead to 10-0. Estrada surrendered a run in the bottom half of the inning and was pulled, but it was too little, too late for the Rangers.

The Jays and Rangers will renew hostilities on Friday, at 10 am PT / 1 pm ET.