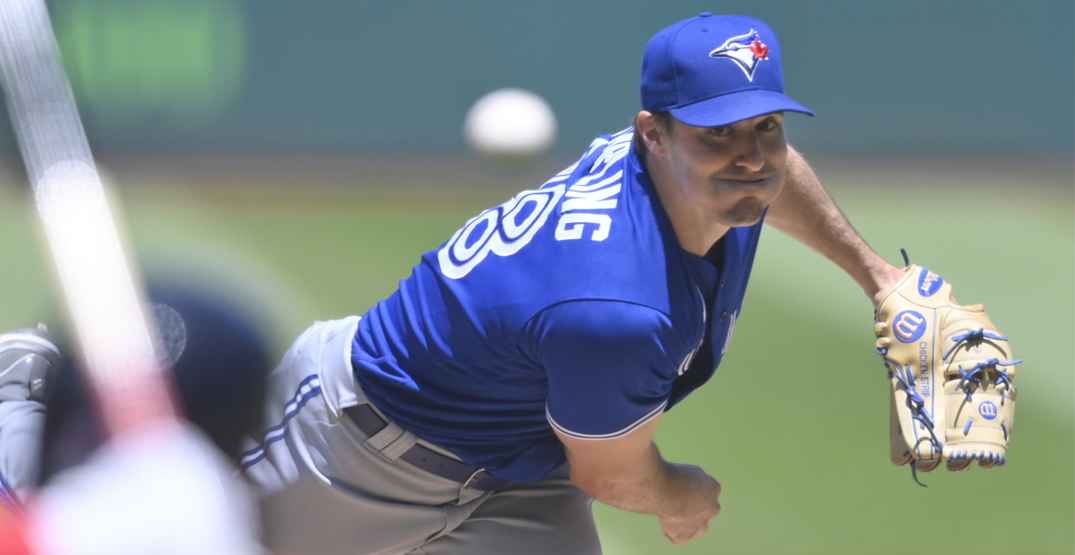 Starting pitcher Ross Stripling came to the Toronto Blue Jays at last year’s trade deadline on August 31, but it wasn’t until this past Sunday when he finally picked up his first win with the team.

For the first time in nine starts with the Blue Jays, Stripling saw a “W” next to his name, as antiquated as the win statistic is. The win wasn’t just symbolic, it was the culmination of efforts behind the scenes to rework his delivery.

With guidance from pitching coach Pete Walker, the team discovered the right-hander was tipping his pitches. The catalyst for the change was a disastrous start against the Red Sox when Stripling surrendered six earned runs in 3.2 innings on May 19.

Stripling cited that game as a low point in his six-year career.

The crew went back to the drawing board and made adjustments to his delivery. The results translated immediately with seven innings of shutout relief against the Tampa Bay Rays on May 24.

To the naked eye, it looks like a subtle alteration, but the before and after split screen illustrate the changes in Stripling’s glove placement during his delivery.

Up until recently, Stripling was pitching exclusively out of the stretch to cut down on some variables, but now he’s back into a traditional delivery again.

The right-hander also made a few tweaks to his delivery and setup to increase the deception to hide his pre-pitch grip as long as possible. He explained these adjustments on the latest episode of his podcast, “Big Swing.”

“I was having a hard time with tipping pitches because I was going up to the bill of my cap on some pitches, like my curveball,” Stripling said on his podcast. “On other pitches, I was only going up to my chin. You can’t give Major League hitters that kind of an advantage.”

Stripling noticed he had a distinct tell on his bread and butter pitch: his curveball. He was raising his hands up to the top of his cap on his signature pitch, but for his changeup, he left his hands about six inches lower, right under his chin.

Opposing hitters picked up on that tell and leading into the game where he unveiled those drastic adjustments, Stripling sported 7.20 ERA. In that start against the Red Sox, he gave up a career high six runs and tied a career high with three homers allowed in a single game.

Rather than lift his glove with his windup, Stripling now keeps his glove at his belt through his windup process. This allows him to be more consistent with his delivery and it also gives him more deception to keep hitters off-balance.

Earlier in the year, Stripling raised his hands through his delivery, but he said the height would vary from game-to-game and inning to inning. Not only did it mess up his timing, it gave other teams intel about what pitches were coming.

After making the latest change, Stripling’s hands stay at the belt consistently until he delivers to the plate.

“For one, you’re going to be able to get your ball out of your glove at the same time every time, so your timing should be better,” Stripling told reporters during a post-game press conference. “And two, it should be more deceptive, as far as keeping the ball out of the view of the hitter.”

Back in 2018, one of Stripling’s Los Angeles Dodgers teammates noticed he was tipping pitches as well. Infielder Chase Utley lent a few pointers to his fellow Dodger, and Stripling counteracted.

The Blue Jays noticed some pitch tipping creeping back in with Stripling again, and despite the two game sample size, the results have been promising thus far.

“It’s as big of a change as I’ve ever made in the big leagues, no doubt about that,” Stripling said.

In his last game against Cleveland, the six-year veteran also heavily altered his pitch mix, relying on a steady diet of fastballs through his first three innings of work. He didn’t work a curveball into the mix until the fourth inning, the second time through Cleveland’s order.

A typical Stripling start might only have 46% fastballs and 22% curveballs. Against the Cleveland Indians, Stripling cranked his fastball up to 54% usage and dialled down his curveball to 15%.

In his two games since making this adjustment, Stripling piggybacked off Trent Thornton and threw seven innings of relief and striking out seven batters. With his new-look delivery, Stripling took his regular turn in the rotation again, tossing five innings of one-run ball against the Cleveland Indians.

Heading into that game versus the Rays at TD Ballpark when he first unveiled those changes, Stripling sported a 7.20 ERA. With only one earned run surrendered over his last 12 innings of work, he’s whittled his ERA down by over two runs to 5.11.

He never struck out more than five batters going into that game versus the Rays, and he struck out seven and nine batters respectively over his last two games.

Typically, wholesale changes like these happen during the offseason, or during minor league starts, away from the TV cameras and the bright lights of the big leagues. But as someone who was teetering on the edge of losing his roster spot, Stripling had no choice but to make these changes.

“When you’re rocking a 7.00 ERA and you feel like your career is crumbling around you, you’re going to go to the pitching coach and the bullpen coach and ask for suggestions, and what they see and what they think.”