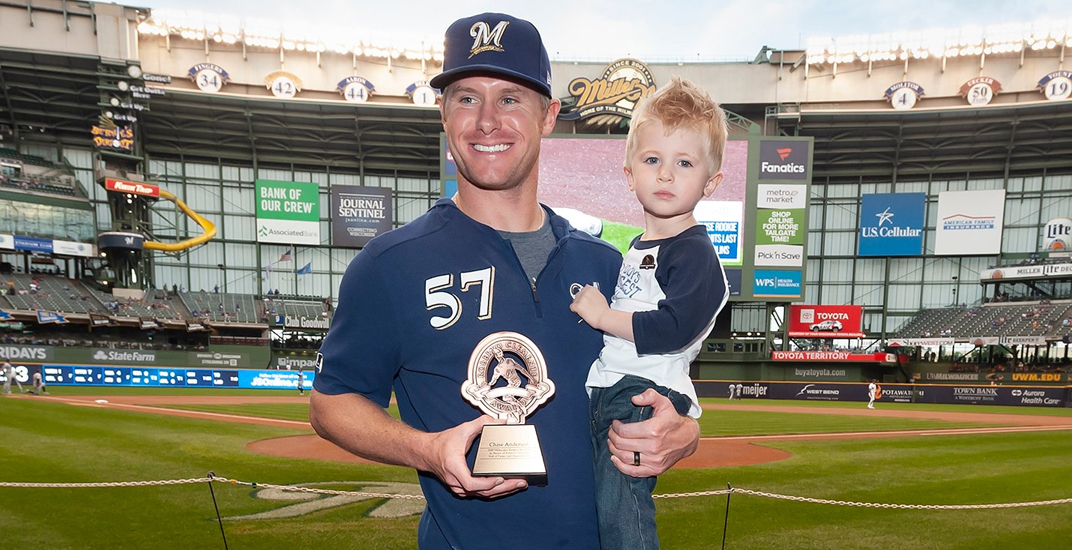 Aside from work, there aren’t many captivating reasons for a Texan native to visit the city of Toronto in the dead of winter.

Sure, Castle Loma is cool, but it’s not worth braving heaps of snow and the Arctic winds to get there. “The Six” isn’t exactly a must-see destination for people not used to seeing 15 centimetres dumped on the ground in one day.

As one of the newest members of the Toronto Blue Jays, Chase Anderson found himself in that exact predicament, travelling to Toronto for the Blue Jays’ two-day Winter Fest event.

Anderson was the first domino to fall for the Blue Jays this offseason. As a club starved for starting pitching, he was the first arm acquired by the front office this season and set forth the chain of events which saw the Blue Jays sign Tanner Roark and Hyun-Jin Ryu.

“I think getting to know a bunch of new guys, a new pitching staff, a new organization, it’s going to be good for me and evolve into a better pitcher,” Anderson told a group of reporters during Blue Jays Winter Fest.

The 2018 opening day starter for the Milwaukee Brewers presents an interesting starting rotation option for the Toronto Blue Jays in 2020. He’s experienced some success over the past few years, but the Brewers chose to non-tender him in November 2019.

The Blue Jays acquired the right-hander and his $8.5 million salary this year and a $9.5 million club option for the 2021 season.

We live in an age with reams of data readily available in Major League Baseball and players either embrace the analytics revolution head-on or they turn a blind eye to the numbers. Consider Anderson to be part of that former group; a pitcher who enjoys sifting through the numbers to see where he can gain an edge.

“I’ve used analytics the last few years to make my game better and see what I’m really good at,” Anderson said. “I know my fastball plays really well in the strike zone. It has a good spin rate. It’s probably about average, but the spin efficiency is really pure. It’s on a really good axis. So I know that it plays really well out there.”

When pitchers are pouring over video and sifting through thousands of numbers, it’s easy to get overwhelmed. But Anderson keeps a simple motto: “I’ve learned where to throw those pitches and looked at the data where I get hurt at and where I don’t get hurt at, so I try to stay away from those spots I get hurt at.”

“He really harped on: ‘Be great at what you’re good at’. And you want to work on your weaknesses, but you want to hammer on those strengths.”

As a player with six years of big league experience, Anderson joins the 2020 Blue Jays rotation as a voice among a rookie-laden pitching staff. Throughout his career, he’s continued to evolve by introducing and refining new pitches.

The latest and most deadly pitch in his repertoire is a brand new cutter, which he used with great success as a member of the Brewers in 2019. The changeup has always been a primary pitch for Anderson, but his cutter usage rose to a career-high 14.5 percent in 2019. He also refined his cutter into a plus-pitch to go along with his elite changeup.

FanGraphs ranked Anderson’s cutter as the second-best in Major League Baseball during the 2019 season, second to only Jeff Samardzija’s cutter. Anderson started throwing his cutter more often in 2019 and added a few miles per hour to the pitch, which improved its effectiveness that much further.

“My changeup is always going to be there, that’s always been my bread and butter pitch to go to. And then the cutter’s really broken out within the last few years. The four-pitch mix has really helped me.”

Combine that plus-cutter with his plus-changeup and round if off with a fastball and curveball, and Anderson has all the makings for a solid arsenal in 2020 with the Blue Jays.

Thoughts on the Astros sign-stealing scandal

The Houston Astros’ sign-stealing scandal was top of mind among Blue Jays players and coaches throughout Winter Fest weekend, some like Randal Grichuk offering very pointed opinions on the matter.

Anderson acknowledged that on-field sign stealing is prevalent in Major League Baseball, and he considers it fair game. But when teams use technology to gain an unfair advantage against opponents, that’s when Anderson said teams cross the line.

“The live feed stuff, that’s where you’re breaking the line,” Anderson said. “If the hitter knows what’s coming, it’s a lot easier to hit a baseball than if he doesn’t know what’s coming. I get if the catcher’s giving signs and the guy’s leading off second and he’s picking up signs; that’s the pitcher and catcher’s fault right there. They need to change that up. There’s a line, and if you cross it, it’s considered possibly cheating.”

In the case of pitchers like Anderson, red flags started going off when opposing hitters are suddenly hitting a typical unhittable pitch. Pitchers started getting suspicious when the best pitches in their arsenal were tattooed over the outfield fence.

“Why is this guy hitting my changeup when it’s a really good pitch? It’s 0-2, it’s almost in the dirt, he’s swinging at it and firing it into left field like he knew it was coming,” Anderson said. “He hit a fastball that was a well located, over the fence 400 feet. How does that happen? Sometimes the hitter is just on you and sometimes you are tipping your pitches.”