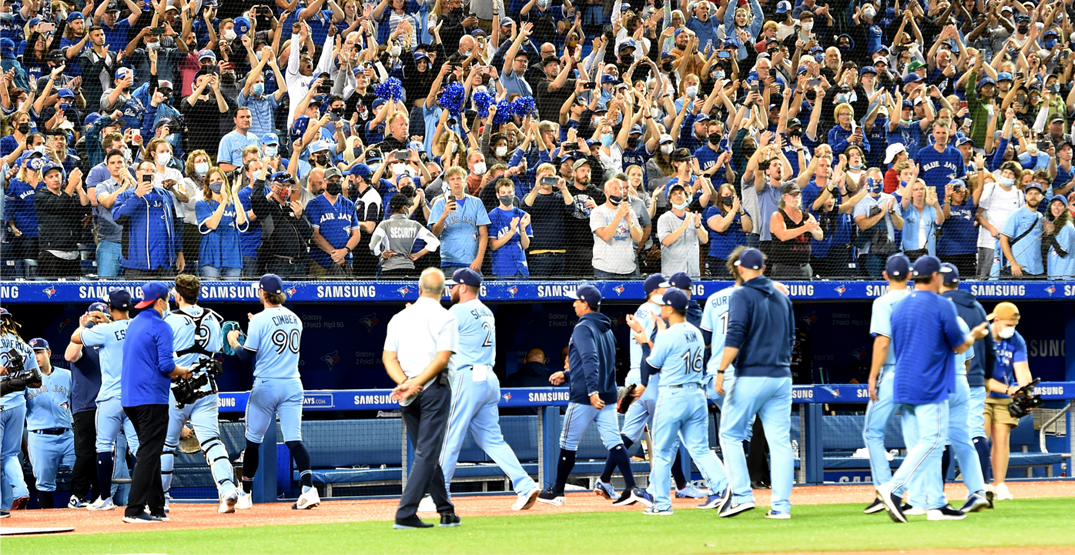 It was one of the wildest seasons in Toronto Blue Jays history. A campaign that saw the team schlep between three different “home” ballparks. A season when it wasn’t even certain the team would return to their home nest in Toronto.

At the conclusion of it all, the Blue Jays came up just a hair short of a playoff berth this season. Despite a 91-win season and posting their sixth-best regular season record in franchise history, it still wasn’t enough to squeak into the postseason.

Not that any team would be satisfied with missing out on the playoffs, but this team has everything to be proud of after all they accomplished in 2021.

For fans, it’s okay to feel disappointed, angry and upset at how the Blue Jays season concluded. But there’s plenty of good to celebrate after a chaotic campaign that won’t soon be forgotten.

Heading into Opening Day, if you told most people the Blue Jays would end up with 91 wins, that would arguably exceed expectations. But it just so happened the American League East was a meat-grinder this season, housing four 90+ win teams.

Also, talk to the Seattle Mariners who secured 90 wins this year and also sat on the outside looking in. The Blue Jays can sympathize with the Mariners at how cutthroat this season was in the American League.

In any other year, 91 wins would be more than enough to secure a playoff berth, heck, even clinch a division. But 2021 was unlike any other year in recent memory for the Blue Jays, so it only seems par for the course.

It’s easy to go back and cherry pick some of those games the Blue Jays should’ve won and circle those moments as games that slipped away. The many meltdowns authored by Tyler Chatwood, Rafael Dolis and Brad Hand.

There was the go-ahead inside the park home run that slipped under the glove of Josh Palacios on August 27. The game when Breyvic Valera seemingly scored the go-ahead run against the Mariners, but he was called out and the Mariners then walked it off.

Playing revisionist history and pinpointing extra wins on the schedule is a simple exercise, but it’s also a pointless one … because for every game the Blue Jays “should” have won this year, they also clawed back and won other games they had no business storming back for (the double header games in Baltimore are a prime example.)

The Blue Jays had one of the best run differentials in the American League. They had one of the best lineups in baseball in 2021, and they still couldn’t make the playoffs? To me, that’s a testament to how hard they worked this year and how impressive their lineup was.

Consider that the Blue Jays played on the road for the first four months of the season, all the undue difficulties that come with playing in minor league ballparks fashioned as big league stadiums, not knowing if or when they’d return to Toronto.

Before Opening Day, if somebody said the Blue Jays would have two top three MVP candidates, the front-runner for the Cy Young award, a sophomore closer establish himself, and a rookie sensation starting pitcher post a better ERA than Gerrit Cole, fans would sign up for that.

The Blue Jays sent four players to the All-Star Game, with three of them starting in the midsummer classic as fan votes. Players on this roster will receive MVP, Cy Young and Rookie of the Year votes.

After some questioned whether Vladimir Guerrero Jr. might be a bust as a prospect, he dedicated himself to improving his fitness during the offseason and returned to camp as a new man.

At 22 years old in just his third year in the big leagues, Vladdy took his fate into his own hands and now he has a long and fruitful career ahead of him. After posting the numbers he did in 2021, his name will be in the MVP conversation for future seasons.

He didn’t bust his ass just to be a one-year flash in the pan. This kid is here for the long haul and can help the Blue Jays become a perennial contender in the American League East. Without the contributions of Guerrero Jr., who knows what their record would’ve been this year?

While Vladdy led the team in most of the jaw-dropping offensive categories, quietly, Marcus Semien tried second base on for size and set himself up for a gigantic payday this winter.

In the absence of George Springer, Semien stepped up and provided that top-of-the-order veteran clout this club needed. Semien played Gold Glove calibre defence. He ran the bases well and clubbed a career high 45 home runs.

Then there’s Robbie Ray, picked up off the scrap heap by the Blue Jays at last year’s trade deadline. He signed for a meager $8 million as a free agent last winter and returned to the Blue Jays on a team-friendly deal.

Ray (along with the Blue Jays pitching and support staff) unlocked a dormant dragon, and he torched teams across the league, leading the AL in several key pitching categories in 2021. This was all during the “sticky stuff crackdown” season, mind you, and Ray’s numbers skyrocketed this season.

After finishing the 2020 season in Single-A, Alek Manoah made the leap to the Blue Jays Triple-A affiliate team before making his MLB debut in late May and the kid pitched like his hair was on fire for the rest of the year.

Come June, every reliever other than Jordan Romano and Tim Mayza were on the hot seat, and the Blue Jays’ front office got to work and rebuilt the bullpen on the fly by acquiring Trevor Richards and Adam Cimber.

Romano established himself as a legitimate closer by converting 23 consecutive save opportunities this season. Despite some early season hiccups and a brief stint on the IL, Romano stabilized himself and solidified the back-end of the Blue Jays bullpen.

You can go up and down the Blue Jays roster and find positive takeaways from almost every player who finished the season with the squad. And there’s room for growth and development for what is still a young team.

Not that it’s an excuse, but let’s also mention the Blue Jays’ $150 million dollar man Springer was injured for more than half of the season. When he was healthy this year, the man justified the largest free agent contract in Blue Jays history.

While it’s uncertain whether key free agents like Ray and Semien will return next year, the Blue Jays will only look to add this offseason, not subtract. Whether that’s a high-priced free agent or a blockbuster trade, the Blue Jays have the financial muscle and resources to be one of the big players in the American League.

It’s a bit masochistic to say: “The Blue Jays should be in the playoffs,” but believe it or not, there’s also value in this team facing adversity. They’ll use it as fuel to come back next year, even hungrier.

With most of this core set to return in 2022 (and many years beyond that), 2021 doesn’t feel like a one-off for the Blue Jays. It feels like a stepping stone towards something much bigger in the future.

The Toronto Blue Jays teams of the 80s and 90s didn’t leap into success right away. They built themselves towards becoming contenders, and they suffered some brutal late-season and playoff heartaches. But in 1992 and 1993, they won it all.

On paper, this 2021 Blue Jays team was one of the most talented cast of characters in decades. Having three of the best players at their respective positions in the same season (Guerrero, Semien and Ray) is remarkable.

But if you asked any of those Blue Jays players, surely they’d trade their individual accolades for team success. That’s where the preparation and hard work bring this team back hungrier, more driven and more focused in 2022.

It was a wild ride but there’s no shame for the Blue Jays ending up where they did this season. 91 wins is something to be proud of. Next year, they can improve upon that total and strive to win that elusive last game of the season.